Over the last several years, the ongoing #MeToo movement has cast a spotlight on workplace sexual harassment and gender bias.

Yet despite the heightened awareness of these issues, over half (57%) of women working in science, technology, engineering, and mathematics (STEM) professions that were surveyed said they have experienced workplace sexual harassment, and more than two-thirds (68%) said they have been the victims of gender bias (see Exhibit 1), according to the results of the 2021 Sexual Harassment, Gender Bias, and Pay Equity Gap in STEM Professions global survey fielded by Boston, MA-based Information Technology Intelligence Consulting (ITIC).

Additionally, 22%, or two in 10 survey respondents, alleged the sexual harassment they were subjected to was more serious and rose to the level of unwanted physical advances, ranging from touching, groping, and sexual assault, up to and including rape. That statistic is unchanged from ITIC's 2019 survey.

The percentage of female STEM professionals alleging gender bias in the latest ITIC study increased to 68% (885) from 61% of 1,100 (671) respondents in ITIC's 2019 inaugural study. ITIC's definition of Gender Bias includes a wide array of inequitable activities, such as women being passed over or otherwise denied promotions on the basis of their gender, coping with hostile work environments as they sought advancement in traditionally male-dominated STEM verticals, losing out on pay raises to less-experienced or less-qualified male counterparts performing similar duties, having promotions delayed or derailed because of the "Mommy track" – when women take more extended family leave after giving birth, and having their contributions ignored or demeaned because of their sex.

In essay comments and first-person interviews, many survey respondents described being humiliated in staff meetings by being told they "didn't belong" in certain jobs, like science and engineering, specifically because of their sex, despite well-documented qualifications.

On the topic of pay equity, more than a third (39%) of women STEM professionals responding to the survey alleged they are paid less than male counterparts who perform comparable duties and hold the same job title. However, a nearly equivalent 37% of survey participants said they were "unsure" if they were paid less than male counterparts. Pay equity is the one area of workplace discrimination that remained fairly constant, with no percentage changes in ITIC's 2019 and 2021 surveys. 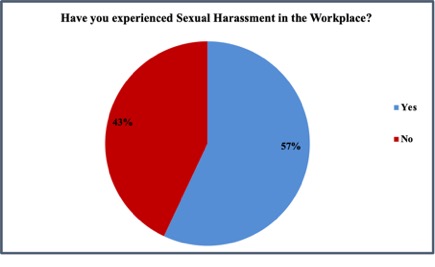 Survey respondents were culled from 27 STEM-related vertical industries. They include academicians, analysts, C-level executives, engineers, IT managers, marketing managers, mathematicians, medical professionals, researchers, reporters, salespersons, computer security professionals, software and hardware developers, scientists, telecommunications professionals and writers. The survey polled women of all age groups – from 18 to nearly 80.  A 69% majority of respondents were from North America, and the remaining 31% were from other countries.

Since 2017, the #MeToo movement has shone the spotlight on workplace sexual harassment, gender bias, and unequal pay. There's no doubt that progress is being made in the quest to quash workplace inequities. A January 2021 report from Business Insider found that in 2020, women filed discrimination and harassment lawsuits in record numbers.

Similarly, a 2019 report from Good Jobs First, a Washington, D.C.-based self-described national policy resource center for grassroots groups and public officials promoting corporate and government accountability in economic development and smart growth for working families, found that from 2000 to 2019, 99% of Fortune 500 companies paid settlements in at least one discrimination or sexual harassment lawsuit (that's not including the cases without a public record or incidents victims didn't report).

The Good Jobs First report observed that most of the lawsuits it identified ended with confidential settlements. In reviewing those cases with publicly disclosed verdicts or settlements, the report found 189 Fortune 500 companies had paid a total of $1.9 billion in penalties, including $356 million in 238 cases resolved by the U.S. Equal Employment Opportunity Commission, $65 million in 85 cases handled by the Office of Federal Contract Compliance Programs, and $1.5 billion in 176 private lawsuits.

Despite these encouraging reports and statistics, rank and file women in STEM and other professions still face more challenges when they come forward and claim workplace harassment and bias than their rich and famous counterparts.

ITIC's 2021 study asked women to specify the various types of workplace sexual harassment they experienced throughout their careers (See Exhibit 2). Of the 57% (857 of the total 1,451 respondents) who alleged having experienced workplace sexual harassment, 71% (587) cited off-color jokes and offensive language as the most common occurrence. That was followed by 54% (447) who claimed they were pressured by male peers and bosses to have sex in exchange for a raise or promotion or, in a worst-case scenario, as a condition of keeping their jobs. 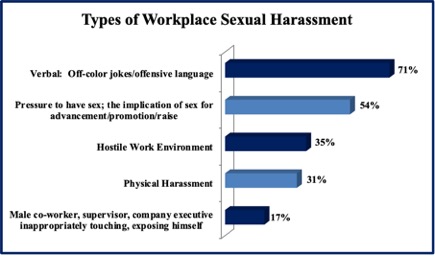 ***Based on a sample size of 857 women, representing 57% of survey respondents
who claimed they had experienced workplace sexual harassment.
Source: ITIC 2021 Sexual Harassment, Gender Bias and Unequal Pay in STEM

Gender bias takes many forms, ranging from being asked inappropriate questions during the interview process to Positional Bias (segmenting jobs and titles on the basis of gender, such as women being relegated to administrative duties, or being delegated to supporting roles to their male counterparts) to the Glass Ceiling, where women are passed over for promotion and are designated to train male coworkers/peers/subordinates, who are then promoted ahead of them and above them.

As Exhibit 3 details, the most prevalent type of gender bias cited by 64% (632) of the 987 women who reported experiencing any form of gender bias was "inappropriate workplace conversations that were offensive and/or demeaning and made the woman feel uncomfortable." 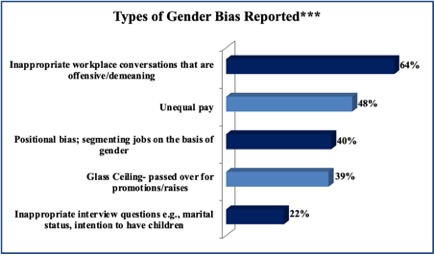 ***Based on a sample size of 987 women, representing 68% of survey respondents
who claimed they were victims of gender bias in the workplace.
Source: ITIC, 2021

Among the other top survey highlights:

Overall, three-quarters (74%) of survey participants said dealing with sexual harassment and gender bias issues has been a fact of life throughout their careers.

"Sexual harassment and gender bias have been ongoing issues from my days as an undergraduate to the present," said Dr. Ingrid Perscky Arravanti , a urologist and surgeon at Hospital Paitilla in Panama City, Panama, who specializes in male urology-related health issues. "This is Panama, you don't complain," she observed. Instead, Perscky Arravanti, who is also president and founder of the non-profit Global Men's Health Foundation, a Panama-based nonprofit organization working for men's health and men's rights. said she learned to endure and become more savvy about avoiding potential harassment situations. "It's not always possible to do so, but in those instances where I'm confronted with sexual harassment and gender bias, I will strongly and vocally speak up for myself. I refuse to be cowed."

Christina Silvestry, an advanced paramedic based in New York City studying for her nursing degree, agreed. Like Perscky Arravanti, Silvestry said she has experienced multiple incidents of sexual harassment and gender bias from co-workers and supervisors throughout her 20 years in the workforce. Silvestry said the sexual harassment aimed at her has run the gamut from off-color jokes and offensive language to pressure to have sex. "Within the last year, one of my male bosses propositioned me and exposed himself. I rejected his advances in no uncertain terms and quickly left the room," Silvestry said.

"Sexual harassment is an everyday fact of workplace life. I haven't made any formal complaints. I fear rocking the boat. I don't want to lose my job, or make a complaint that is ignored and then still have to deal with the person [I complained about]," Silvestry said.

Can You Recycle a Hard Drive? Google is Quietly Trying to Find Out

A Developer's Guide to Machine-Learning Security