Technologies for the Visually Impaired

Thanks to recent advances in technology, the blind and visually impaired are now able to lead more independent lives than ever.

The WeWALK Smart Cane is a great example of what is now possible. The WeWALK looks similar to the cane that some blind and visually impaired people have used for decades to avoid obstacles while walking, but it incorporates a few modern twists.

With a standard cane, you can still run into obstacles that are not immediately underfoot, like poles, tree branches, and barriers. The WeWALK, however, detects objects above chest level and audibly alerts you if you're getting too close, which can save you from a painful fall.

Also, when using a standard cane, you have to hold a smartphone in one hand to listen to directions, making it even more difficult and dangerous to navigate your environment. The WeWALK integrates with a smartphone's map app to read directions out loud, allowing you to keep one hand free.

Finally, the WeWALK costs less than $500, making it affordable for many of the estimated 10 million visually impaired people in the U.S., and 250 million worldwide.

However, despite the progress, there are still major unresolved problems.

Technologies like sophisticated smartphone apps and artificial intelligence have empowered millions of blind and visually impaired individuals, but many websites are still inaccessible to the visually impaired, making it difficult or impossible to use key online services, tools, and experiences that the sighted may take for granted. 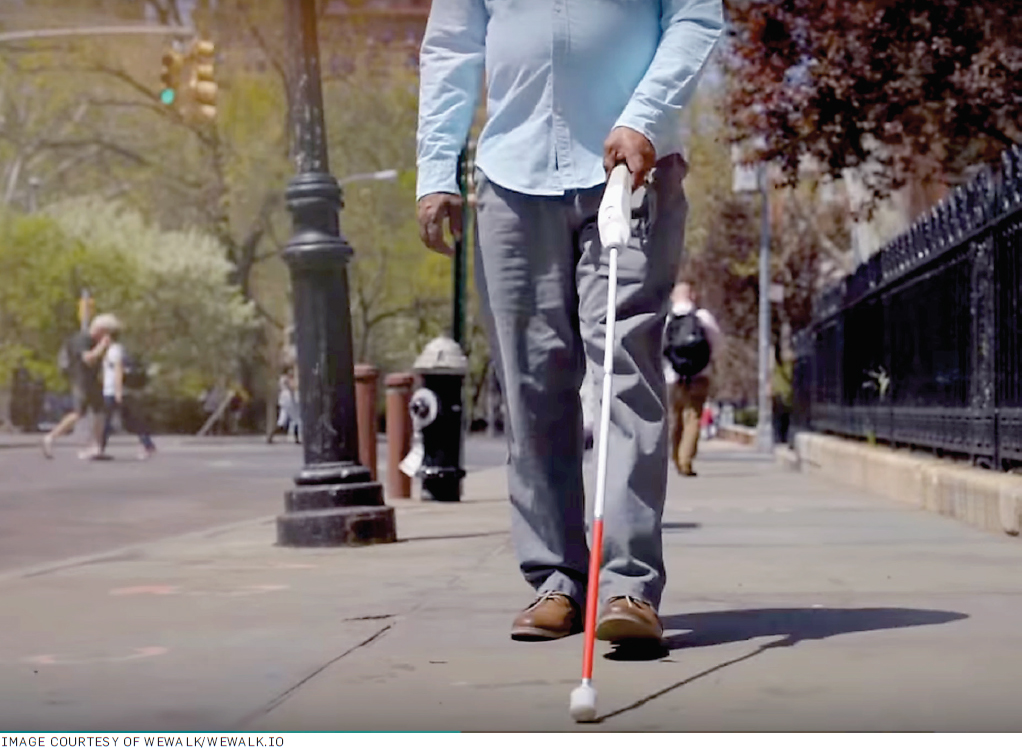 The result is an imbalance in assistive technology progress. On the one hand, it's never been easier or more affordable to acquire new, powerful accessibility technology; on the other, there are still serious accessibility issues with the technology that powers much of modern life.

A Decade of Progress

Technological progress during the last decade has created major benefits for society as a whole, as well as for the blind and visually impaired in particular.

Most of today's innovations in technology for the blind and visually impaired are delivered via smartphone. These include sophisticated applications that empower the visually impaired to navigate, count money, and obtain assistance with basic tasks. They also include tools such as artificial intelligence and machine learning to recognize facial expressions and describe the external world in real time.

The sheer ubiquity of smartphones has made them the perfect enabling device for the blind and visually impaired. The percentage of U.S. adults who own smartphones has risen from 35% in 2011 to 81% in 2019, according to Pew Research, and Cisco estimates more than 70% of the global population will have mobile connectivity by 2023. 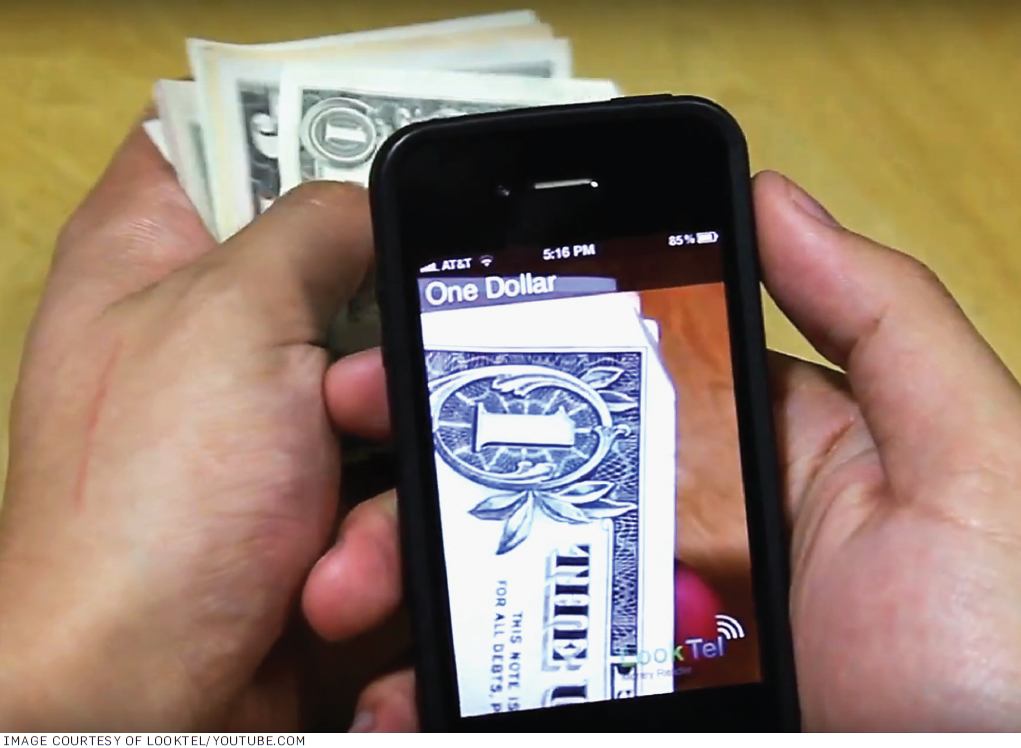 Figure. The LookTel Money Reader app captures an image of paper money on a smartphone, and speaks aloud the denomination of the bill.

Navigation is a huge part of the value smartphones provide for the blind and visually impaired.

GPS-enabled devices mean you now have access to accurate, audible real-time navigation pretty much wherever you go. At least one popular navigation app—Google Maps—offers detailed voice guidance for the blind and visually impaired.

Smartphone navigation integrations also matter. The WeWALK Smart Cane's app integrates with the actual cane hardware, so you receive turn-by-turn instructions and clockwise navigation directions right from the cane itself, without having to remove your smartphone from your pocket.

Navigation isn't limited to walking down the street, either; smartphone applications now make it easier for the blind and visually impaired to navigate other difficult situations. For example,

In all cases, the value of these apps is that they're affordable, a big change from a decade ago, says Jeffrey Bigham, an associate professor in the Human-Computer Interaction and Language Technologies Institutes at Carnegie Mellon University, who works on accessibility issues. "When I did my Ph.D. in the 00s, a screen reader (a software program that reads aloud text displayed on a computer screen, or displays it in braille) cost more than $1,000; now, the VoiceOver screen reader is available on every iOS device for free, even the Apple watch," he says.

Smartphone apps make it easier for the blind and visually impaired to navigate other difficult situations, like counting paper money and labeling their surroundings.

Affordable smartphone apps have empowered the blind and visually impaired. Now, artificial intelligence (AI) is taking those apps' capabilities to the next level.

AI and machine learning technologies, specifically computer vision, have grown sufficiently robust to improve the lives of the blind and visually impaired.

Computer vision is a machine's ability to recognize objects in an environment. Microsoft is leading the way with its Seeing AI smartphone app, which uses computer vision to process the immediate environment, other peoples' facial expressions, and text, and then tells what is happening around them. Users simply hold up their smartphones, and the intelligent camera app "sees" for them.

Another example of AI at work is the captioning built into tools like Skype (owned by Microsoft) and Google Slides. The technology uses another application of AI and machine learning, namely natural language processing, to understand the text in a chat or on a slide, then read it aloud. This happens in real time, allowing the blind and visually impaired to navigate conversations and presentations with less friction.

While AI has unlocked promising applications, it is still early days, says Bigham, who points out that AI technologies and tools still make plenty of errors, and few people would want to rely on them exclusively to navigate the world. "We are at the 'better than nothing' stage of AI in accessibility," he says. "That's honestly a lot better than the nothing many people had in some situations not too long ago."

While smartphone and AI technology have advanced in the last decade, less progress has been made on the accessibility of our current digital infrastructure.

According to the World Wide Web Consortium (W3C), many sites and tools online today have design barriers that make them impossible for the blind and visually impaired to use, because they don't follow accessibility best practices. In the U.S., it's a legal requirement under the Americans with Disabilities Act (ADA) to make sites accessible, but accessibility rules are unevenly enforced.

W3C offers a host of guidelines on making websites accessible for the blind and visually impaired. These include notions like providing text alternatives to non-text content so content can be converted into large print or braille. It also includes making all functionality on a website accessible using only a keyboard.

The W3C organization even has a set of Web Content Accessibility Guidelines (WCAG), a series of documents that "explain how to make web content more accessible to people with disabilities," according to the organization's website.

As one example of what this looks like in practice, many sites are not marked up correctly with HTML, so text-to-speech software cannot accurately translate words into audio for the blind and visually impaired. In most cases, these are easy technology fixes, but they often are overlooked or neglected.

"We have known how to make computing technologies accessible to people who are blind for decades," says Bigham. "Yet the biggest problem remaining is to convince people to code their websites and other applications correctly so they are accessible."

Bigham does note that companies such as Apple, Google, and Microsoft are getting much better at handling issues of accessibility. All three now have large groups dedicated to accessibility issues relating to their products and digital experiences.

For instance, Apple uses its VoiceOver capabilities to describe what is happening on your Apple device. The company also offers visual filters to help the colorblind and magnifiers to help the visually impaired. Apple devices can also be navigated entirely through voice commands, if needed, using Voice Command capabilities.

Artificial intelligence is taking the ability of affordable smartphone apps to empower the blind and visually impaired to the next level.

Bigham notes the accessibility groups at these three major tech companies have "varying levels of influence," and companies like Amazon, Facebook, and Twitter are lagging behind when it comes to accessibility.

Holding technology companies and developers accountable is important work. It also perfectly highlights how frustrating it can be to balance getting existing technology providers to follow the rules, while also inventing better technologies to increasingly enable the blind and visually impaired.

"I would personally prefer to be working on exciting new accessibility applications, but I spend a lot of my time arguing with organizations to make their websites accessible," says Bigham.