Wireless technologies have advanced by leaps and bounds over the last several decades. Speeds have increased dramatically, connectivity has improved, and wireless network protocols—including Wi-Fi and cellular—have become ubiquitous. Today, a reasonably fast, persistent wireless connection is available in most parts of the world.

Yet, despite all the gains, today's wireless networks are still relatively limited in terms of how they handle large volumes of data. Connection speeds are adequate for basic tasks like Web browsing, videoconferencing, e-commerce, gaming, streaming videos, and exchanging messages. However, as new and more resource-intensive technology enters the picture and the Internet of Things (IoT) expands, the need for bandwidth is growing—in some cases, by an order of magnitude.

Terahertz communications, also known as submillimeter radiation, could address this problem. Because it relies on the high end of the radio spectrum, at frequencies from 300GHz to 1,000GHz, it delivers far more bandwidth than today's networks, and can connect many more devices. At the same time, terahertz technology has characteristics that could radically change the nature of computing and the IoT. This includes sophisticated sensing capabilities based on spectroscopic signatures. 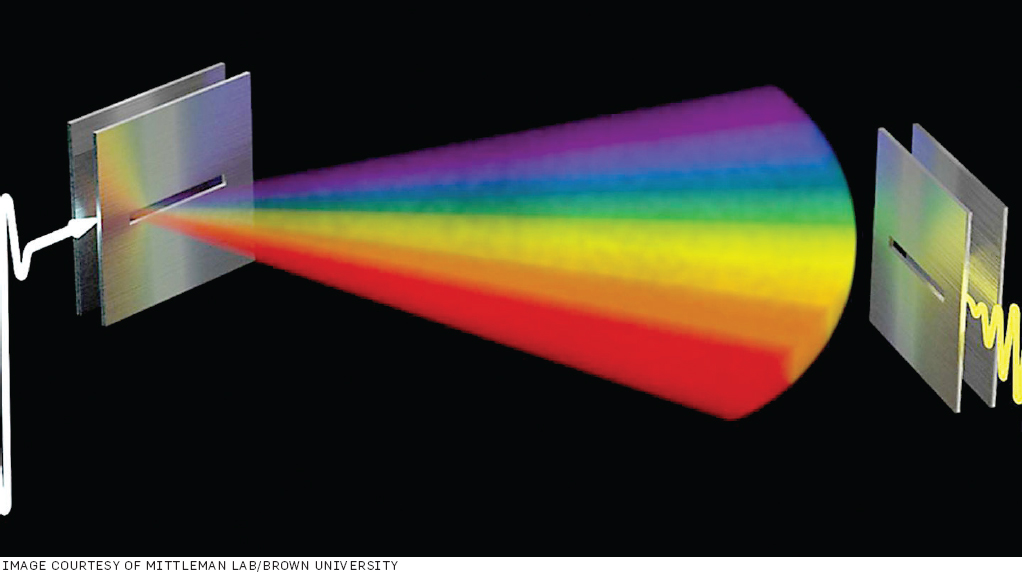 Figure. Terahertz frequencies escape from leaky waveguides in a 'rainbow' pattern that can be used to help devices find and identify each other in future terahertz wireless networks.

Recently, terahertz communication took a major step toward becoming a viable technology. Researchers at Brown and Rice universities found a way to solve a longtime problem with keeping devices connected to a terahertz network. As a result, optimism is growing that the technology will soon evolve to a commercial scale.

"It's possible to do a lot more things—and introduce more advanced features—at higher frequencies," says Daniel Mittleman, a professor of engineering at Brown University. "Terahertz could be transformative."

The appeal of terahertz networking is clear: today's cellular and Wi-Fi networks carry voice conversations and data streams using microwaves. However, the lower end of the radio spectrum cannot accommodate the growing demand for bandwidth. As networks become overwhelmed, speed and device performance degrade. Even emerging 5G (fifth-generation cellular technology) has limitations and eventually will hit technical and practical limits for speed and performance. On the other hand, terahertz waves, which exist between optical and microwave frequencies, increase transmission speeds multifold, while expanding what wireless systems can do.

Terahertz networking "represents the next leap forward of what we can achieve with communication and sensing," says Edward Knightly, Sheafor-Lindsay Professor of Electrical and Computer Engineering at Rice University.

Future routers and 6G cellular networks likely will incorporate terahertz spectrum. However, that is just the start. By providing access to almost unlimited bandwidth, terahertz systems could allow fleets of autonomous vehicles or robotic devices, including drones, to communicate without bandwidth limitations that often lead to latency and network congestion; they could support massive virtual reality environments, and could revolutionize home health, physical security, and cybersecurity by introducing far more accurate motion and sensing capabilities. For example, the unique sensing capabilities of terahertz technologies could potentially monitor air quality and sense certain types of pollutants that may otherwise be difficult to identify, or scan people and bags at airports with far greater precision than today's millimeter-wave scanning systems.

In fact, sensing capabilities within networks could take a huge leap forward as a result of terahertz technology. "There are few, if any, materials that can be readily sensed using spectroscopy in the lower-frequency bands that are traditionally used for radar or wireless communications," Mittleman says. "But the terahertz range is rich with spectroscopic signatures, so there are many feasible sensing targets."

Terahertz signals bounce off reflective surfaces; some materials can create reflections that can extend gigahertz coverage across houses, buildings, and factories.

It's an important consideration. "The technology creates completely new opportunities for detecting motion and for using indoor positioning," says Yasaman Ghasempour, an assistant professor of electrical engineering at Princeton University who studied terahertz technology as a graduate student at Rice University. For example, terahertz sensors could detect when someone or something that should not be there enters a specific space or area, with high degree of accuracy. In addition, unlike vision-based techniques, terahertz communication is unaffected by lighting or atmospheric conditions, and it can better preserve privacy, she explains. For instance, it's possible to tune terahertz transmissions to a specific distance, say 100 or 200 meters, and thus control who has access to the signals, Mittleman says.

Still another aspect of terahertz radiation that's particularly intriguing is its ability to bounce signals off reflective surfaces. Ghasempour says certain materials such as metals, glass, or even concrete can create strong reflections that extend terahertz coverage across houses, buildings, and factories. As terahertz technology is incorporated into cellular towers and routers, "This would make it possible to reduce or eliminate antennas, range extenders, access points, mesh systems, and other assistive wireless technologies. The reflective surfaces serve as an antenna instead," she points out.

Terahertz sensing already is used for specialized applications, such as satellites monitoring the atmosphere, and specialized short-range imaging and signal transmission. Yet, the physics of the terahertz spectrum has built-in limitations for networking. For one thing, terahertz wavelengths propagate in a completely different way than microwave technology, and they cannot penetrate solid walls or pass through many objects, such as steel and wood (they are able to pass through some types of glass and plastic). Unlike current wireless technologies such as 802.11 or cellular networks, the waves cannot saturate an area or indoor space and easily connect to devices. "The question becomes what is the right direction to point the signal?" says Josep Jornet, an associate professor in the department of electrical and computer engineering at Northeastern University.

At frequencies in the millimeter-wave range, conventional device discovery takes place through a sequential search process. A transmitting device, say a router or cell tower, scans at various angles until it finds a device with which it can connect. However, as the frequency increases the beams become narrower, and more steps are required for this discovery process. This renders the sequential approach impractical. The problem is magnified when large numbers of mobile devices become part of a network. "Finding the right direction to transmit the signal between the sender and receiver can be difficult and time-consuming. If all clients are moving, the potential overhead is high just to keep the beams aligned and devices connected," Knightly points out.

Researchers are taking direct aim at these technical barriers. For instance, the group at Brown and Rice universities demonstrated that a device called a leaky waveguide, which has been used in other microwave systems, can assist with link discovery at terahertz frequencies. The passive device is comprised of two metal plates that allow radiation to propagate in the space between them. One of the plates has a small opening that allows small amounts of radiation to leak out. By changing the opening, it is possible to adjust the frequency of the input signal to the waveguide. As a result, radiation escapes in different directions. As a broadband signal enters the device from a router or cell tower, the device creates a unique signature. Once this handshake takes place, the router or cell tower can infer directional information, lock onto it for directional communication, and maintain a persistent connection as the user and device move about.

Key challenges remaining include how to maintain persistent connections to large numbers of devices on the network, and clearly defining industry standards.

Reflective materials also could solve part of the transmission problem and boost router and network sensing capabilities. "By adding special substances to walls, floors, and ceilings in rooms and using various objects, such as lamps and wall paintings, to bounce signals throughout the structure, you essentially potentially wind up with hundreds or thousands of antennas and potential sensors," Ghasempour says. This capability, along with improved algorithms designed to interpret data and reflective angles, could produce a faster and much smarter communications network than what's possible today. "There is a lot of additional research that needs to be done on reflective materials, but they are clearly a viable tool for developing terahertz technology," she says.

Yet another area of current research focuses on chips and antennas. At Nanyang Technological University in Singapore, researcher Ranjan Singh is studying the use of topological photonics to address inherent problems with intrachip and interchip communication at terahertz frequencies. This includes creating new designs and shapes that better accommodate the signals. Jornet, who has studied terahertz technology for more than a decade, has examined everything from materials and antenna designs to new algorithms and routing methods. "The biggest remaining question is how to produce a compact chip, radio, and communications protocol that can work in the real world within an integrated platform. Ultimately, terahertz networking is both a physics problem and a communications problem."

Commercial products using terahertz technology will likely appear sometime over the next five to 10 years, Knightly says. Solving the leaky waveguide problem was a major step forward, but there are still several key challenges to overcome. These include issues ranging from how to maintain persistent connections when large numbers of devices are connected to terahertz networks, to more clearly defining industry standards. There's also a need to add outdoor infrastructure, including the smaller, more densely packed cells that terahertz networks require. Nevertheless, "Terahertz's unique capabilities of sensing and high-rate low-latency networking will drive commercialization," Knightly says.

In fact, Knightly and others believe terahertz communications ultimately will be a game-changer. It will deliver the ultra-high bandwidth and, as a result, the super-low latency needed to operate autonomous machines and other systems used in smart factories and cities, through Wi-Fi and 6G. It will add sophisticated sensing features that may reshape networking, and it could transform virtual reality from a niche technology into a mainstream tool that complements or replaces today's teleconference and presence systems.

Says Knightly, "Terahertz supports large numbers of people and environments that completely overwhelm today's technology. This opens up all kinds of possibilities."