Futurists Get 15 Minutes Every 4 Years

Zoltan Istvan did not win the 2020 New Hampshire Republican presidential primary. He got 45 votes.

He had not expected to win.

Istvan, who was listed on the ballot under his full name, Zoltan Istvan Gyurko, is best known as a futurist and transhumanist — one who explores the melding of human biology with the components of machinery and technology. As artificial intelligence (AI) and bionic technology become ever more functional, Istvan said the goals of transhumanists offer aspirations and lessons for science and humanity at large.

"At some point, even though genetic editing is fabulous, we want to move away from biology," Istvan said. "We want to move to integrating ourselves into silicon, into data, to just pure code. Because I think the real future of life is probably in some type of quantum intelligence that's even beyond the AI age. But that will take going through the AI age, merging our brains directly into some type of machine intelligence."

In today's "at-a-glance" media climate, Istvan may come off as a nut who wants to live forever and offers, at almost a retail level, artificial wombs to mitigate the nastiest points of the debate over abortion and reproductive rights. However, his opinion pieces in such publications as The New York Times belie that snapshot.

In his Times piece about ectogenesis, for instance, Istvan not only lays out the case for out-of-womb gestation, but also the societal complications that might result from an additional 150,000 babies born annually, which is more than the existing number of adoptions. Another opinion piece laid out the current and potential future obstacles faced by those who wish to use implanted RFID or NFC microchips to perform such quotidian tasks as opening door locks, clocking into work, or making payments on things such as vending machines and parking kiosks.

Istvan knows firsthand the slow pace at which far-edge technology becomes adopted by the mainstream.

"I have a small chip inside my left hand, and I use it to open my front door," he said. "I can use it to send a text message if people get close enough with their phone. Unfortunately, an interesting thing about it is we have a new BMW, and the BMW dealership would not let me set up software to start it because they said it would void the anti-theft technology."

Istvan joined more than a dozen candidates that might best be described as "other" when the votes were tallied in New Hampshire. In addition to top-tier candidates such as President Donald Trump, Istvan joins those on the fringes such as President R. Boddie, who has said he is running because the spirit of the living God has ordered him to do so, and Star Locke, who said the Star moniker was bequeathed to him by John Wayne after Locke punched out a bartender in defense of a woman.

Andrew Smith, director of the University of New Hampshire Survey Center, said the impact of the fringe candidates is next to nil, not only on the ballot, but also in calling attention to their platforms among the state's rank-and-file voters. "They essentially have no impact on the race," Smith said. "They have 300 or 400 people who may vote for them across the state. I think that does point out there are a lot of people who vote in it because it's something to do: it's kind of a civic holiday up here. They don't really care much one way or the other which candidate wins. They're going to vote for whomever their party's nominee is in November, anyway." 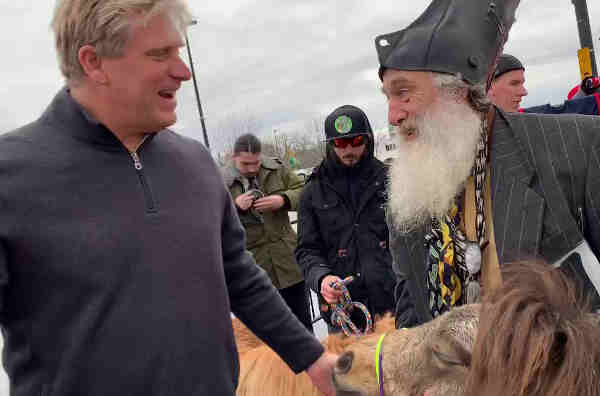 Istvan, who has managed to land on primary ballots in California, Texas, Oklahoma, and Colorado as well, and who polled among the "Other" category in the Iowa caucus, has no illusions about his chances at the ballot box. He points another candidate whose philosophy was a voice in the wilderness when he joined the national debate during the Ronald Reagan-George H.W. Bush era.

"I'm not trying to pretend," Istvan said. "The chances of me winning any election any time soon is very small, but I am in this for the long run. I'm in this for 2032, or maybe 2028. The idea is, you build up a name brand and all of a sudden maybe one day you could win, especially because the stuff I talk about is futurist issues, science issues, life extension issues. Every day, this stuff becomes more and more important. Hopefully, what's going to happen is kind of like what happened with Bernie Sanders; his message is finally resonating, and I'm hoping in 15 or 20 years, my message, which people have been hearing on the fringes, might start to resonate."

Istvan's campaign planks appear to be, to some extent, a quixotic hybrid of positions both parties view as anathema. For instance, he advocates universal basic income, as did Andrew Yang, but he would achieve that by opening federal land to development, a policy universally condemned by progressives. Over the long term, he said, advances in genetic engineering could replenish natural resources at a speed and degree as yet impossible, but he also acknowledges that such a mix of ideas can dissatisfy people on either side of the political spectrum.

"Once you can start using nanotechnology and genetic editing to change the environment, you may be able to very quickly replenish environments that have been destroyed for resources," he said, "and at that point it is not about lessening the carbon footprint; that is remaking the earth. It sounds so radical, most environmentalists say, 'No, no, lessen your carbon footprint,' but the irony is in my world, to save the planet we have to develop a little more commercially and capitalistically. And once we have these new technologies, we can use it to save the planet.

"My main thing is life extension, that's probably my biggest goal. If we could solve the problem of aging and the problem of death by the year 2030 versus 2050, we will save 1 billion lives. If we can stop the aging process or stop death through synthetic organs or genetic editing or stem cell technology, we are saving more lives than all the wars have ever taken in history combined. We're talking about the greatest humanitarian quest in the world through life-extension science."

Though the idea of technologically enabled immortality might sound bizarrely far-fetched, Glen Hiemstra, founder of Futurist.com and a veteran observer of where futurist candidates end up in the larger discussion, said that issue may actually be the one Istvan's vision can contribute the most to the mainstream policy discussion.

"I think any policy impact he might have would be, strangely enough, this sort of immortality plank, promoting the idea it should be a public priority, a government priority to support scientific research into anti-aging and living a long time," Hiemstra said. "What's interesting about that right now is there is a political movement, primarily a Republican movement, to sort of discount science, to put it lightly; to ignore it, basically. That's the one kind of theme that could get into the national conversation following an election, that it would be a good thing if the government got into anti-aging research. That has great spillover into healthcare research."

In fact, Hiemstra said, there may be some precedent for a futurist candidate having a long-term influence on public policy. In 1984, futurist Barbara Marx Hubbard was listed as a potential Democratic vice-presidential nominee, and actually addressed the national convention. "She ran on the idea that the office of the vice president should manage something in the White House called the Peace Room, while the president was in charge of the War Room," Hiemstra said. "She thought the Peace Room should be an operation which identified positive breakthroughs, technological breakthroughs, and healthcare breakthroughs all over the world, so we could implement what she called a campaign for a positive future. Nothing came of it in 1984, but I've always wondered whether Al Gore saw that, because he sort of implemented those things when he was vice president."

UNH's Smith said if any places might respond favorably to Istvan's life extension platform, New Hampshire could stop the list. The Advanced Regenerative Manufacturing Institute, founded in Manchester in 2016, is pioneering large-scale manufacturing of engineered tissues and tissue-related technologies.

"In New Hampshire, speaking from the university's perspective, that's actually quite a big thing," Smith said. "The stuff he's talking about, this man-and-machine stuff, if it were going to have a resonant audience, it might have a greater chance here than probably anywhere else, because of the publicity that got. So it's a smart place for him to run, but I don't think there's that big of an audience that either understands it or thinks that somebody with that background or skill set should be president of the United States."

Gregory Goth is an Oakville, CT-based writer who specializes in science and technology.