In a laboratory at Yale University, a soft toy horse with prosthetic coverings around its foam-stuffed legs has taken its first tentative steps. Despite its stiff and not entirely coordinated gait, the toy demonstration may point the way toward helping space agencies put lighter, more versatile robots into space.

Rebecca Kramer-Bottiglio, assistant professor at the Yale School of Engineering & Applied Science, says she was wrestling with the problem of how to allow robots to handle a wider variety of jobs than current approaches, which often focus on performing a single function well, when the U.S. National Aeronautics and Space Administration (NASA) issued a request for novel robot designs based on lighter, plastic approaches.

Rather than attempt to lift many single-task robots into orbit, the space agency wants a single reconfigurable machine to be able to handle different tasks and, occasionally, to act as prosthetics for human astronauts. "You may need to make an exploratory locomotion robot that can go out and collect data from an unknown environment. At the same time, you may need suits to promote blood flow in the astronauts who are onboard," she says. And NASA wants to avoid the weight of bulky, metal-framed robots. 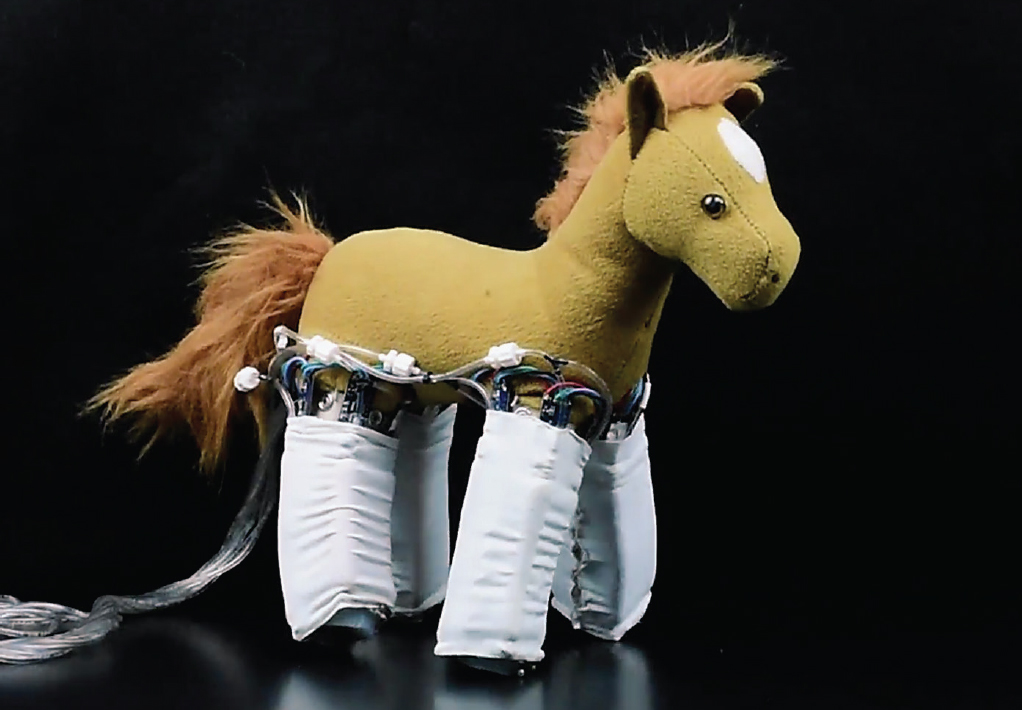 "The idea I had was to have a robotic skin," she says.

Armed with sensors and pneumatic actuators, the artificial skin can have its function changed by changing how it is wrapped around a flexible core. With actuators aligned along the length of a flexible rod of foam or an inflatable, they can force a bending motion. Two or three close together become grippers. Rotate them 90°, and the actuators let the rod move around like a worm. The smart skin may massage the legs of an astronaut, or act as exoskeletons to help with resistance exercises; the function changes as the skin is peeled off, rotated, and replaced.

Kramer-Bottiglio's ultimate hope is that with a sufficiently malleable interior, the skins could have two types of actuator. One would mold the interior to form appendages, while another type would move those appendages around; in effect, forming a robot that morphs based on the job it is asked to perform. "It is a vision that we are quite far from today," she concedes.

Like other researchers into robotics, Kramer-Bottiglio faces two key problems: force and control. Although the soft robots are made of lighter materials than traditional robots and should be easier to move, it is difficult to deliver large amounts of power to the artificial muscles. Engineers are still many years from being able to emulate the high power-weight ratio of organic musculature. Yale's robotized toy horse makes slow progress because the pneumatic actuators find it hard to bend its foam-stuffed legs, and the use of open-loop control leads to motion that is far less coordinated than that of a real horse. Not only that, most of these robots need to be tethered to electronic and pneumatic or hydraulic power sources, which limits their freedom.

A shift away from traditional electronic robot design and construction could liberate soft automatons from their tethers and help them move more freely.

A shift away from traditional electronic robot design and construction could liberate soft automatons from their tethers and help them move more freely. Several years ago, Jennifer Lewis and colleagues at Harvard University were asked whether it was possible to make a fully autonomous soft robot. In attempting to design one, they moved away from electronics, batteries, and motors to a structure that could be controlled by microfluidics.

The Octobot they produced provided the mechanics and core structure of an octopus-like robot made from a sandwich of materials that are not very different from the silicone caulk used to line bathroom sinks. However, the construction is much more complex. As an experimentalist with long-term involvement in three-dimensional (3D) printing, Lewis and her colleagues took advantage of the technology's ability to build complex structures in layers. As it forms each layer, the 3D printer works around the voids that will become microfluidic channels and pneumatic pipes used to fuel and distort the limb's shape.

Motive power for the Octobot's limbs comes from a supply of hydrogen peroxide in the robot's body. Micro-fluidic channels controlled by a network of tiny structures analogous to electronic logic gates to implement components such as oscillators convey the peroxide to reaction chambers. Each chamber contains a platinum catalyst, which splits the molecule into water and oxygen. The resulting gas drives pneumatic actuators that move the limbs, although they can do little more than twitch.

Soft robots may overcome the power problem by operating in environments where gravity is not as big a problem as it is on land. The microgravity of space may be one obvious habitat for them, but robots made from elastomers and pumps already find the going much easier under water.

Former Florida Atlantic University (FAU) student Jennifer Frame chose the jellyfish as the biological model for her thesis. Named JenniFish, the robot uses stubby plastic tentacles harnessed to hydraulic pumps powered by a battery to mimic the pulsing action of the invertebrate's body as it moves. Able to swim untethered in the ocean, it is flexible enough to squeeze through narrow orifices. In experiments, the robot would collide with the edges of a hole, then generate enough thrust to push its appendages to its side and squeeze through.

Another situation in which soft robots could perform well is in a different fluid environment: inside the human body. In work performed in Europe before moving to Stanford University in 2016, Stanford postdoctoral fellow Giada Gerboni (who works in surgical robotics) developed a soft endoscopic camera for surgery. Now Gerboni is focusing on soft robots that can enter the body, move around, and perform microsurgery operations without direct intervention from human surgeons. She describes it as a very flexible needle that can steer around parts of the body and into organs with minimal disruption.

In further work by the group led by FAU associate professor Erik Engeberg, the JenniFish has helped demonstrate how material choices form a key part of design for liquid environments. The algorithm needed to make the robot swim in different directions is relatively simple: it takes advantage of the way the polymer limbs are shaped to bend in on themselves when flexed. By changing the plastics used for the top and bottom surface of the JenniFish tendrils, swapping hard for soft versions, the FAU team found there was an optimum combination for thrust: with both top and bottom being made of a material with floppiness similar to that of a mouse pad, being pulsed a little less than once a second.

Gerboni is focusing on soft robots that can enter the body, move around, and perform microsurgery operations without direct intervention from human surgeons.

In addition to the challenges roboticists face with materials and power delivery, Josh Bongard, associate professor at the University of Vermont, says control presents further problems. "Exploiting the capabilities of soft robots is a very non-intuitive thing for human engineers to do. The mathematics that we've developed over decades for designing and controlling traditional robots made up of rigid links simply doesn't apply to [these] systems. In short: it's hard to design and control moving blobs."

In contrast to the inverse kinematics and closed-loop control that dominate fixed-function robots, Bongard proposes harnessing evolutionary programming coupled with machine learning to develop novel control methods for producing movement that take into account how plastic materials bend and compress under force.

In these simulations, the design starts with a basic shape made from blocks with different levels of stiffness and mobility. Evolutionary algorithms gradually change the properties of different blocks until the robot is able to move. The algorithms tune their response to the way materials flex under strain in different positions using machine-learning algorithms such as neural networks. Sometimes, the simulated machines use the equivalent of body fat to help leverage the effects of whatever type of motion the robot adopts. Bongard says, "Our evolutionary algorithms often find very non-intuitive designs, such as one that has a hump on its back and uses it to throw its weight forward to make movement more efficient."

The work tends to agree with results such as those from FAU: softer robots perform better under water. Those simulated on land tended to require stiffer structures. Bongard now plans to take the work to physical robots in a collaboration with Kramer-Bottiglio and her team on a project backed by the National Science Foundation. The simulations will help create configurations for the robotic skins and the underlying shapes the skins are wrapped around.

Although soft robots have a long way to go before becoming autonomous enough to deliver on the promise of lighter, more functional machines, research and development is gradually bringing together the types of control and materials science that will make them work well on Earth and beyond.