Agricultural businesses usually have a massive number of trackable assets (plants, livestock, and machinery), often operate in wide geographic areas in which these assets are located, and are subject to operational factors often beyond their control, such as the amount of sunlight or rainfall they receive, or temperature fluctuations. As such, agriculture is ripe for the adoption of new technologies to help monitor and manage assets on a granular level, and everything from Internet of Things (IoT) sensors, robots, and drones are being used by farms around the globe.

The U.S. Department of Agriculture's National Institute of Food and Agriculture notes that the farms of today are avid users of agriculture technologies such as robots, temperature and moisture sensors, aerial imaging, and GPS technology, which are more precise and efficient than humans alone, and allow for safer, more efficient, and more profitable operations.

One example of how technology enables new farming techniques is the use of robotic harvesting on indoor farms, which today account for a tiny fraction of the 900 million acres of traditional farmland in the U.S. However, these indoor farms are well suited to the growth of vegetables such as tomatoes, lettuce, and other leafy greens, are highly sustainable, generally feature an average yield per acre more than 10 times higher than that of outdoor farms, and represent a continuation of the agricultural sector's trend toward incorporating precision agriculture techniques to improve yields and become more sustainable.

"Whether it's indoor or outdoor farmers, finding technologies that drive efficiencies is a big deal for [farmers]," says Josh Lessing, co-founder of Root AI, a company developing a robotic platform that allows the inspection, analysis, and harvesting of leafy vine plants grown indoors, such as tomatoes. "[A lot] of work has been done specifically in precision agriculture. 'How do I reduce the amount of herbicide; how do I reduce the amount of pesticide?'" 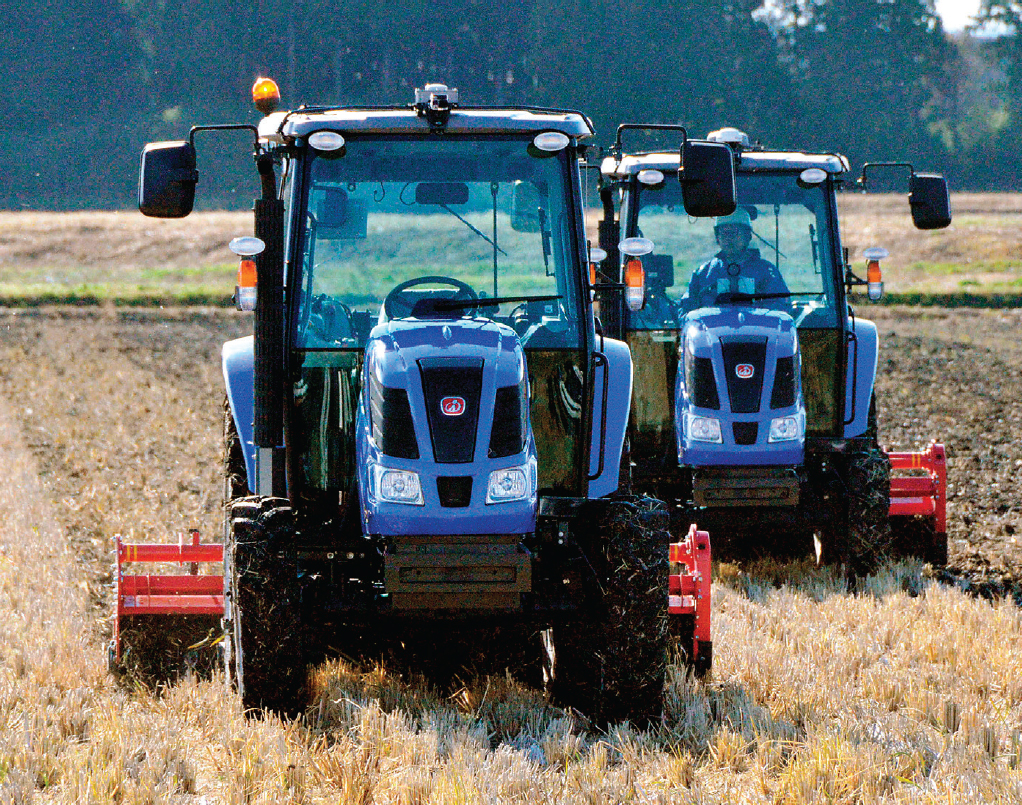 Figure. A robotic tractor (left) cultivates a field alongside a tractor operated by a human, during a demonstration in Fukushima, Japan.

Lessing notes indoor agricultural practices expands a farm's margins, because less is spent on pesticides, since insects can be kept out of the greenhouse. Furthermore, reducing the use of chemicals can also limit the environmental impact of the operation.

Root AI's robot uses multiple cameras to collect color images and three-dimensional (3D) depth information on growing plants. One camera is located in the arm of the robot itself, while a secondary camera is affixed to the side of the robot to provide a visual frame of reference.

The platform uses a customized convolutional neural network to detect objects of interest and label them with bounding boxes, which are used to train and build up the system's knowledge. While rolling between rows of plants, the camera captures the location of each fruit or vegetable, while also measuring properties such as ripeness, size, and quality grading. The data capture is done in real time, on the robot itself, without requiring access to a data center or the cloud.

The robot also uses a soft gripper, which looks like a pair of plastic salad tongs, that can pick a fruit or vegetable without damaging it. The idea is to allow the cultivation of these types of plants continuously and more effectively than humans can do, while augmenting the labor force.

"What we're specializing in is being able to contact pieces of produce and harvest them without damage," says Lessing. "The customers that I'm working with, one of the major problems that they're running into is they can't find enough labor to expand their operations. So we're supplementing the labor force, and we're delivering to growing managers intelligence to every piece of the operation."

Another challenge faced by crop growers is weed control. Traditionally, farmers would spray herbicides broadly across their crops, which not only was wasteful, but also potentially harmful to humans, as crops were often overexposed to the chemicals. Companies such as EcoRobotix, and Blue River Technology with its See & Spray agricultural machines equipped with computer vision and machine learning capabilities, claim they can eliminate 90% of herbicide volumes typically used on farms today.

The presence of weeds is not the only enemy of crops (and farmers). Plant diseases, if they are not detected quickly, can spread rapidly, and even incremental changes in the soil's composition can have a drastic impact on crop yields.

Some farms are turning to drone technology, using unmanned aerial vehicles (UAVs) equipped with a package of high-definition cameras, IR sensors, and image-recognition capabilities to monitor crops, which can provide significant increases in efficiency. In a recent study, drone operator PrecisionHawk found that farmers who used drone-based aerial intelligence instead of taking plot-based crop measurements by hand were able to collect data 2.5 times more efficiently and 25% more accurately, and the collection itself was more objective, repeatable, and standardized.

Thomas Haun, senior vice president of partnerships with South Carolina-based commercial drone and data company Precision Hawk, says drones provide a significant advantage over not only traditional ground-based visual inspections, but also over satellite-based inspection. From a drone flying overhead, sensors can monitor a variety of conditions, including plant yields and growth information, as well as identifying indications of disease or insect/animal damage, and even tracking temperatures.

"With the drone, you can go from visual data to multispectral data (image data at specific frequencies), to thermal data, to hyperspectral data (from across the electromagnetic spectrum) all in one flight," Haun says, noting that satellites are generally not equipped with sensing technologies that allow a very granular view of crops or plants. "We're capturing data at sub-centimeter resolution. There's an actual spatial resolution that our [sensors] are getting, providing a real advantage."

Currently, most drone operators are limited by operational regulations, which limit drone flights to those that can be observed by the human operating the drone with his or her own eyes. This generally limits drone operations to about one square mile, according to Haun, though companies can apply for a Beyond Visual Line of Sight Waiver from the U.S. Federal Aviation Administration (FAA), although few such waivers are granted).

Precision Hawk has a waiver that allows the company to operate drones up to four miles away from an operator, but the company expects that as time goes on and the FAA becomes more comfortable with drones, other commercial drone operatorsand eventually farmers themselveswill be able to fly drones over a wider expanse beyond visual contact.

However, drones are hardly the only technology that allow agricultural asset monitoring and management. Using IoT-connected sensors placed near plants, farm operators can capture and record environmental conditions, and then send the data back to the farm's data center for analysis and action via a wireless connection. In some farming regions, there is a robust commercial wireless network (or networks) that can serve as a backbone for IoT-connected sensors, and agriculture companies simply need to purchase and place sensors throughout their fields. While they need a sophisticated data capture and analytics solution in order to leverage the data captured, farms like those in the U.S. are generally able to quickly cover their harvesting area and begin to yield real insights by capturing data from the sensors, and acting on those insights immediately.

However, in other parts of the world, particularly in developing regions such as South America, Africa, and parts of Asia, commercial wireless coverage is not ubiquitous, as in low-population areas where much of the farming and harvesting is done. Rajant Corp. of Malverne, PA, is a provider of wireless mesh networking technology that works with large agriculture companies in South America to provide the connectivity required to monitor the huge fields of sugar cane, soybean, corn, and other agriculture crops, which are often located in remote areas with no wireless coverage.

Through the use of Rajant's mobile mesh networking technology, intelligent nodes called Breadcrumbs can be spread out across the fields to capture a variety of attributes, including soil nutrient content, soil pH, and moisture levels that can be tracked in real time, and alerts can signal farmers when a correction is needed. Farmers can then make the necessary adjustments by adding chemicals, water, or nutrients during the prime growing season.

Moreover, the mesh networking technology can be integrated with smart tractors and harvesters, which can include automated functionality, allowing them to easily "carry" the network wherever they are working without requiring a pre-built networking infrastructure.

"The producers in Latin America, specifically in Brazil, do not have connectivity in the field," says Joeval Martins, Rajant channel sales director for Latin America. Martins explains that Rajant's mobile wireless networking technology is a more affordable building out a fixed network that covers the entire acreage of a farm.

Food production is not limited to crops. The management of livestock is also changing, as managers of cows, hogs, and other animals seek to monitor their herds in real time, using Internet-connected collars and tags. Moocall's Calving Sensor was developed in 2014 by founder Niall Austin, who lost a heifer and her calf during a difficult birth. Noting that cows' tail movement often predicts the onset of calving, Austin and his partners launched the Calving Sensor, which clips on the tail of the cow.

"Based on the movement of the tail and the temperature reading, it detects when the cow is actually calving, and it sends an SMS to the farmer, who then immediately takes action," says Ludovico Fassati, Head of IoT, Vodafone Americas, which provides the wireless infrastructure for the service. "In the past, the farmer needed to kind of sleep with the cow, but now, he can be there only when needed. It optimizes the farmer's time," and can reduce the mortality rate of the calving process.

The sensor has sold more than 25,000 units, and the company also offers two other applications, including Breedmanager, a free herd management software app that displays the herd based on breeding status; and Mooheat, a collar worn by a bull, along with a RFID ear tag for each cow or heifer, that can provide detailed information such as exact times of standing heat, due dates, and in-calf notifications.

GlobalSign's Desai notes that this type of tagging can be used to keep track of livestock herds across a wide grazing area. "We have a customer who is providing a solution for automated cattle tracking across a large ranch," Desai says. "What we came up with as a solution, for lack of better terms, is like a Fitbit for cows," with tracking collars with signed and encrypted certificates affixed to cows in the herd, to ensure data cannot be stolen and used by malevolent third parties. Information on cattle movement, individually and collectively, is collected and analyzed to determine whether a specific animal or group of animals have been separated from the herd, or are ill or injured.

"The technology greatly reduces the amount of human intervention or human labor actually required to go and check on these animals," Desai says, reducing labor costs and increasing efficiency and margins for the producer.