High atop the Thomas Jefferson Memorial in Washington, D.C., is a layer of biofilm covering the dome, darkening and discoloring it. Biofilm is "a colony of microscopic organisms that adheres to stone surfaces," according to the U.S. National Park Service, which needed to get a handle on its magnitude to get an accurate cost estimate for the work to remove it.

Enter CyArk, a non-profit organization that uses three-dimensional (3D) laser scanning and photogrammetry to digitally record and archive some of the world's most significant cultural artifacts and structures. CyArk spent a week covering "every inch" of the dome, processed the data, and returned a set of engineering drawings to the Park Service "to quantify down to the square inch how much biofilm is on the monument," says CEO John Ristevski.

"This is an example of where data is being used to solve a problem," to help preserve a historical structure, he says. Ristevski says the Park Service was not charged for the data, and the work CyArk did was funded by individual donors in the San Francisco Bay Area, where the company is located.

CyArk is one of several organizations using 3D scanning to help protect and preserve historic structures from looting, destruction, urbanization, and mass tourism. Iconem, a French start-up founded in 2013, also specializes in the digitization of endangered cultural heritage sites in 3D. Like CyArk, Iconem works on-site with local partners; in its case, in 22 countries. One of those partners is Microsoft Research, and Iconem's technology utilizes the software giant's artificial intelligence and computer vision algorithms to integrate multiple levels of photogrammetry data to build extremely precise 3D models, says Yves Ubelmann, an architect who co-founded the company. 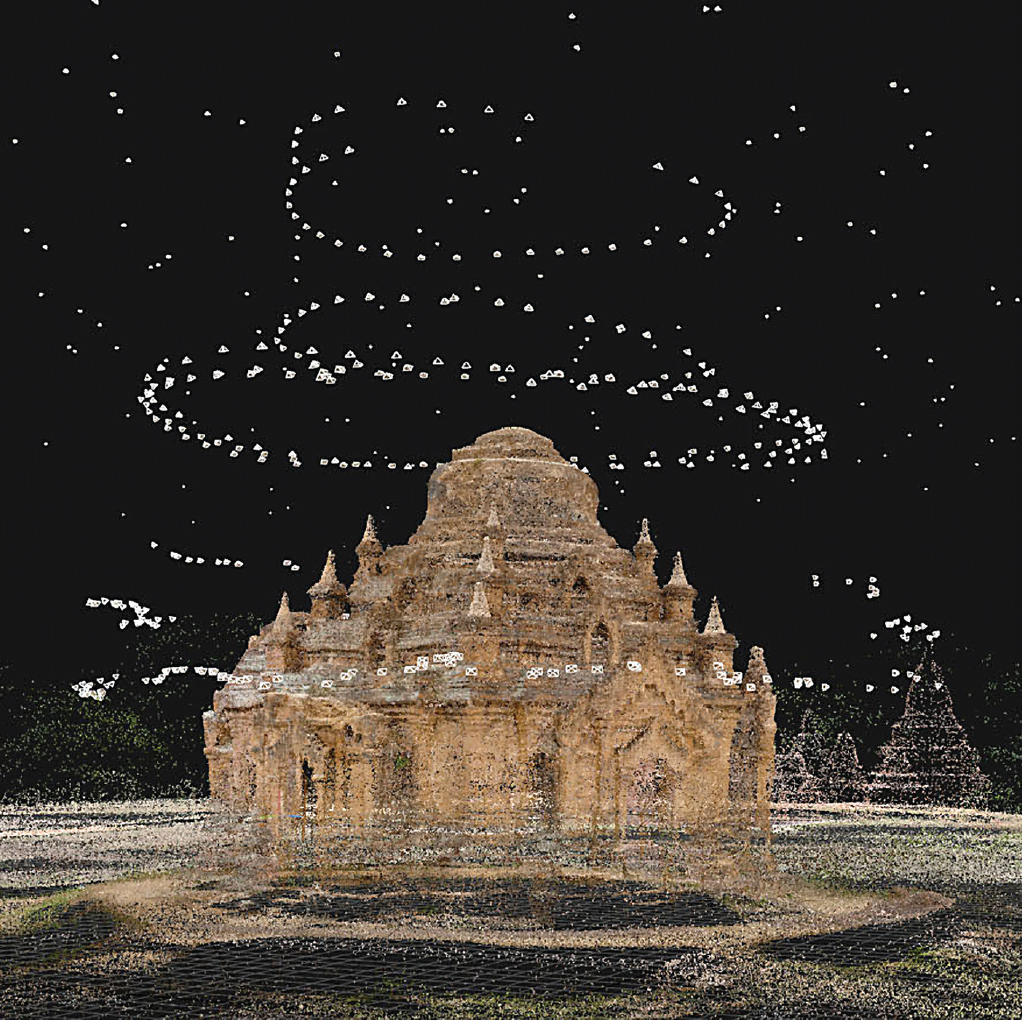 Figure. Capturing photogrammetric data for the digital reconstruction of a badly damaged temple in the ancient city of Bagan, in central Myanmar.

This type of work has raised the tricky question of who owns the rights to these digital scans. Officials at organizations involved in utilizing these techniques for historic preservation say they address this up front to avoid any contentious battles later on.

Iconem's projects are either self-financed or paid for by a client, says Ubelmann. "If Iconem is the sole stakeholder, we share the images with scientific or governmental authorities in the relevant country. They have the right to use them to raise awareness of their historical sites," he says. "It is vital to us that countries be able to share their cultural heritage with their citizens and the international community."

Ristevski also says ownership depends on the terms of a contract signed prior to any work being done. However, he adds that regardless of the way the agreement is worded, "the other party gets a free and fully unrestricted license. This is always articulated up front before we hit the ground and do the work. None of this is ambiguous."

CyArk has been doing this type of work for almost 15 years, in more than 50 countries, "and if we were a bad player, we'd never be allowed back in these countries," Ristevski says. He stresses that if CyArk owns the scanned data, it is the company's policy to never monetize it.

CyArk has partnered with Google Arts & Culture on the Open Heritage Project, which is using the laser technology to capture relevant data and store it in Google Cloud. Ristevski thinks "people are suspicious whenever Google gets involved [in a project] and how they might monetize it," but notes that many museums also work with the search giant's research division. "There are some beautiful exhibits" housed in Google Cloud, he says, but "because Google is involved, there's automatically an assumption that there is some evil bent to it."

There is concern such digital scanning "will recapitulate colonial museum practices that have involved the illicit acquisition of objects from dominated culture groups."

Erich Hatala Matthes, an assistant philosophy professor and member of the advisory faculty for environmental studies at Wellesley College, says that from a moral perspective, anyone involved in 3D scanning work should keep the data open and available.

Matthes said three-dimensional scanning projects "that often originate in Europe and the U.S. and focus on threatened heritage in the Middle East should make every effort to make scans open and accessible to the people and institutions of those countries," he says. "There is a worry that digital scanning efforts will recapitulate colonial museum practices that have involved the illicit acquisition of objects from dominated cultural groups, and the retention and control of those objects under the banner of preservation."

Rather than using terms like "shared" or "universal" heritage as licensing claims to ownership or control, Hatala Matthes believes "We should view those ideals in terms of responsibilities, especially to those who are most vulnerable."

Like CyArk and Iconem, the Institute for Digital Exploration (IDEx) at the University of South Florida (USF) works with local partners on the preservation of culturally sensitive areas that are under threat. "A lot of the work we do aims to help major tourist sites strike a balance between access and preservation," explains co-founder Michael Decker.

For example, IDEx is working with Villa Casale in Sicily, a UNESCO World Heritage Site, to both record mosaics there and to apply an advanced technique of digital forensics. This will help officials predict when the priceless mosaics form bubbles in their surface, which leads to their breakdown, says Decker, who also a professor and department chair in USF's College of Arts and Sciences. While the work is done to record history for posterity, it also creates a rich dataset. "We share all this data freely with our host countries and partners," he says.

The work is funded by private grants and the university's arts and sciences department, and the data is stored in the USF library.

"We also provide datasets to the governments with which we work and academic partners," Decker says. "However, the question of ownership is evolving with no clear international standards. We will see a lot of cases of commercial exploitation of cultural heritage being challenged in national courts over the next couple of years."

Decker cites a recent article by Elizabeth Thompson in the Chapman Law Review in which she wrote, "The cultural heritage objects in question are not protectable by copyright ... On the other hand, creators of digital models of these non-copyrightable cultural heritage artifacts most probably do have copyright protection."

Ping Hu, a partner and chair of the Intellectual Property Group at Massachusetts law firm Mirick O'Connell, says the issue is pretty clear-cut. "The person who creates the 3D scans is the copyright owner. I don't think there is much dispute about it," he says.

Creating a licensing arrangement is a logical solution, Hu says. For example, in exchange for providing commercial access to a historic site, an entity performing 3D scanning work would give the government a royalty-free license to the scans.

David Myers, senior project specialist and manager of the Getty Conservation Institute (GCI) recording and documentation unit, says there are instances where it makes sense for them to retain the data, such as when there is government upheaval. Myers recalls a field conservation project GCI did several years ago to assess flood risk in Egypt's Valley of the Queens.

"Ultimately, we'd like to see the sites themselves doing the work and adopting the tools and doing this continually."

"The number-one threat to those tombs is flash flooding, even in the desert," he notes. GCI commissioned a team to do laser scanning "because we needed a new and accurate topographic map of the valley and the location of tomb openings" and their elevation, to see how it affects the topography. Then the institute could hire a hydrologist to determine what a flood event would look like and which tombs would be at risk. GCI officials also designed flood-prevention interventions.

The Egyptian government funded the flood protection work, Myers says, but when construction was slated to begin in 2011, a revolution occurred. (The work also was interrupted in 2013). The institute has the scan data on its internal servers, and Myers says he is not aware of any issues over its ownership. "There have been particular projects where our partner has put restrictions on things like images and their use, so that's something we work into our agreements," but this only happens on occasion, he says.

If a local government requests the data, Myers says, "Typically we share [it] with our partners and ... I can't think of any case where there's been any reason why we wouldn't do that."

In some cases, GCI also trains local staff on best practices for conservation of archeological sites, so they can conduct preservation work, including 3D scanning, themselves, he says.

Likewise, Ristevski says when CyArk goes into a country, it offers a one-day workshop to local officials "on almost every project" to learn how to do 3D documentation. For example, his team trained Syrian professionals in Lebanon on how to use Light Detection and Ranging (LIDAR) and photogrammetry. "They were able to use those skills [to scan] significant sites in Damascus when it wasn't feasible for us to enter the country," he says. "Ultimately, we'd like to see the sites themselves doing the work and adopting the tools and doing this continually," since CyArk is a small organization and can only take on so much.

Then it is up to the local government, or whomever oversees a historic site, to determine what to do with the scans, he says. "That decision should always rest ... with the National Park Service, the country ministries, whoever," Ristevski says. "I don't think it's our role, or even our right, to be able to do that."

Decker concurs. "We share our work both online and with researchers who want the raw data as well," he says. "We provide these to host governments and partners and have the view that this sort of research collaboration is in the spirit of the scientific method and good ethics."

Save Social Media by Treating It like a City