A New Movement in Seismology

Whenever an earthquake strikes, news reports quickly fill in certain details, such as how strong the quake was and where it was centered. That information comes from a networks of seismometers scattered across the planet. Seismometers, though, can be expensive to install and maintain over long periods, and researchers cannot place them everywhere they might like, such as in the densely built and expensive streets of an earthquake-prone city like San Francisco.

Some scientists, however, are exploring a different approach, using a sensor that is already widely deployed beneath the streets of towns and cities around the world. That sensor is the common fiber-optic cable, used to carry telephone and Internet traffic.

The technique is called distributed acoustic sensing, and the oil and gas industry has used it for several years to monitor the ground around wells it drills. A laser beam traveling through an optical fiber will sometimes strike an impurity in the glass fiber, and part of the beam will be reflected. When an acoustic wave traveling through the Earth strikes a fiber, it stretches or compresses that fiber by a tiny amount. Using an interferometer, researchers can detect changes in the backscattered light and use that to measure the strain on the fiber which, in turn, provides information about the sound wave that struck the fiber.

Oil companies, of course, install such fiber specifically for sensing. There are, however, many thousands of kilometers of fiber lying around unused. When telecom companies install fiber in the ground, they put in far more than they actually need. Fiber is relatively cheap, but digging up and repaving city streets is expensive, so telecoms add so-called dark fiber as a hedge against future needs. 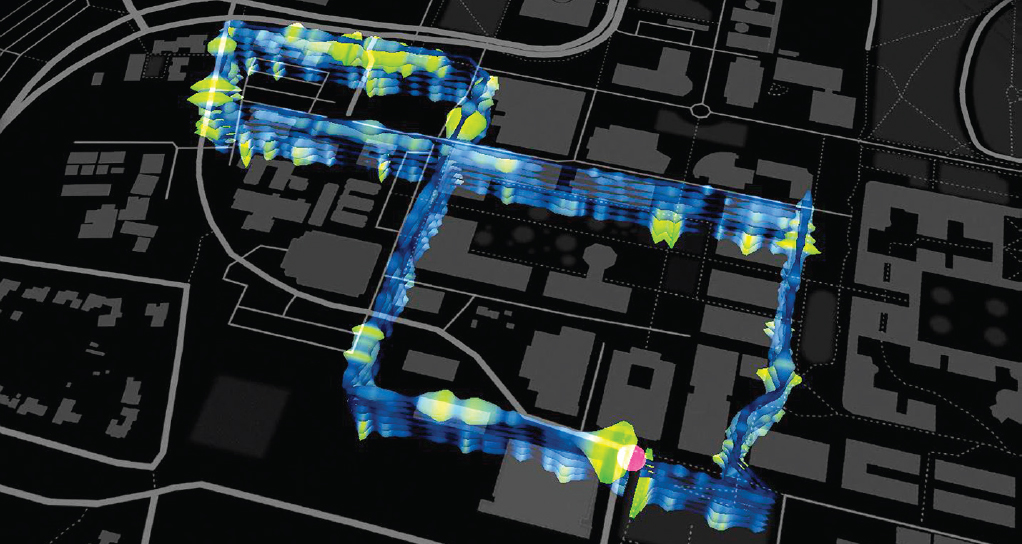 That provides researchers like Biondo Biondi, a professor of geophysics at Stanford University, with an opportunity. "You can basically convert a piece of fiber into a virtual sensor," he says.

Since September 2016, Biondi has been using a 4.8-km-long loop of fiber installed under the Stanford campus to see what sort of signals he could pick up and interpret. The signals, he says, are very noisy.

Fibers used in the oil industry are cemented alongside the drill hole, and are therefore very well coupled to the ground; when the earth moves, they move in concert with it. Dark telecom fiber, though, generally lays untethered in a plastic conduit, rubbing and bumping against the conduit's wall or other fibers. That makes it a lot less sensitive than the high-quality seismometers deployed by the U.S. Geological Survey (USGS) for earthquake monitoring.

Researchers have not made exact comparisons between the quality of signal that fiber sensors pick up and those the broadband seismometers of USGS use, says Jonathan Ajo-Franklin, a staff scientist in the Energy Geoscience Division at the U.S. Department of Energy's Lawrence Berkeley National Laboratory in Berkeley, CA. He has found that the signal-to-noise ratio in the fiber sensors is about 10 to 15 decibels worse than that in geophones, another type of sensor that is itself less sensitive than a seismometer.

However, what the dark fibers lack in sensitivity, they make up for in volume. "Even in the Bay Area (San Francisco) and in the Los Angeles area, which are probably the most instrumented areas in country, you have a seismometer every 10 or 20 kilometers," Biondi says. "Here, you can have a sensor every five meters."

One interrogator box the size of a small rack-mounted server can measure reflections from hundreds or thousands of spots along a fiber, and determine their location based on the round-trip time of the laser light. The lasers are improving in quality and power, and in the not-too-distant future, Biondi says, he can imagine using perhaps 1,000 interrogator boxes to create millions of virtual sensors. "I jokingly say before I retire, I'd like to have an array under the Bay Area that has a billion sensors."

For now, Biondi's test network contains 600 virtual sensors about 5 to 7 meters from each other, taking measurements at a rate of 50 times per second. He has used it to create a database of 3,000 small, local seismic events, and to identify other sources of noise picked up by the fiber, such as traffic, construction equipment, and water pumps. His group is working on machine learning algorithms to automatically identify earthquakes, using labeled data from what they have already collected as the training set. The hope is to be able to identify even smaller earthquakes, and to use such information to develop better maps of fault areas that can be fed into earthquake simulations to project the risks to buildings and people in the earthquake zone. "Really, to have an estimate of a hazard, you need to propagate these seismic waves in the computer using the right properties," he says.

Ajo-Franklin, a sometime collaborator with Biondi, has used the same approach on the Department of Energy's Dark Fiber Testbed to detect and identify traffic noise. He wants to find ways to distinguish the seismic waves produced by a passing semi-trailer truck from those coming from a tectonic shift, particularly since fiber is often installed along roads and railroad beds. The waves from an earthquake have frequency and amplitude characteristics distinct from those of traffic, and they originate from one area, whereas the source of waves from a vehicle moves down the road along with the car. If a computer can automatically identify those differences, it can subtract them out from the waves it is trying to identify.

Ajo-Franklin is using versions of what he calls "classical seismology algorithms for ambient noise imaging scaled up to much larger computers." He has collected about eight months of measurements from a 30km. stretch of fiber north of Sacramento, generating about 300TB of data. "That's a lot of signal processing, and it's a lot of data manipulation, which is tough when you have these volumes," he says.

One challenge is finding the right compression algorithm to shrink the data to a more manageable size. Ajo-Franklin is sure there are plenty of bits that do not convey any useful information, but he is not certain of the best way to find and eliminate them. Standard audio compression techniques are designed to deal with millions of channels that have some coherence across them, which is not what this data looks like. He is exploring signal-processing algorithms, but has not yet hit on a solution.

Some sounds from sources other than earthquakes can be useful in their own right. The way seismic waves propagate is affected by factors such as how densely packed soil is and how much moisture it contains. Measuring the movement of surface waves from traffic allows scientists to map the properties of the soil, so they can tell how likely it is to give way during an earthquake. Ajo-Franklin is working on predicting soil erosion on the sides of roads in Alaska caused by melting permafrost using distributed acoustic sensing (although in that case, the researchers installed the fiber themselves).

Some seismologists want to use sound to make even deeper maps of the subsurface, to depths of 100 meters or more, which could be useful in predicting how a building will react to an earthquake.

Ocean waves produce a constant low rumble that moves around the planet. Those sound waves change as they move through the different components of the Earth's top layerreflected, sped up, or slowed down as they encounter materials such as hard granite or soft water-saturated sediment. Scientists can measure those changes to create a picture of the subsurface, much the way an ultrasound machine can image a fetus. "The physics behind it are very similar," says Andreas Fichtner, a professor of seismology and wave physics at the Swiss Federal Institute of Technology in Zurich, Switzerland, who recently attended a workshop on medical imaging to pick up ideas on how to handle the data.

While others are studying traffic noise, Fichtner is trying to avoid any human-produced sound entirely, to gain a better understanding of what natural sounds dark fiber sensors can detect. He is setting up an experiment 500 meters deep in an old tunnel in the Alps, built to store nuclear waste but now empty. "Before we start using the cables in a quantitative way, we have to understand what we measure," he says.

While more seismologists are becoming interested in taking advantage of dark fiber for sensing, Ajo-Franklin says, they are still figuring out just what quality of data they can get. What makes the work worthwhile is that fiber is pretty much everywhere, even under oceans. "The oceans are a place where there are almost no seismometers," he says. "Except where you have islands, it's a big gap in our coverage of looking at the way seismic waves travel through the earth." He has spoken with a South American telecom company that has some undersea cables that were severed, so they cannot be used for communications, but could still serve as sensors.

If sensing with dark fiber works the way these researchers hope, it will give geologists the opportunity to study not only earthquakes, but things like distribution of ground water in almost any place they care to look. "That's the neat thing about it," Ajo-Franklin says, "because suddenly you have this sensor which is across big, big sections of important basins in the world, and you can measure all of these different attributes that were previously inaccessible."

Kruger, L.
Dark Fiber is Lighting Up, Communications of the ACM, October 2013