In 2013, University of Sheffield roboticist Dana Damian was doing postdoctoral research at Harvard Medical School affiliate Boston Children's Hospital when she learned of a procedure called the Foker technique. The surgery, performed on children with a rare congenital lung defect, calls for doctors to attach sutures to part of an infant's esophagus, then tie them off on the baby's back. Over time, the sutures lengthen the esophagus by pulling on it, stimulating tissue growth.

Although the technique can be effective, the risk of infection and complication is high, and the baby must remain under sedation for weeks. "We were surprised that this was the state of the art at the best pediatric hospital in the U.S.," Damian recalls. She and her team set out to build a less-invasive alternative. "We built a robot that basically does the same thing."

The device, developed with colleagues at Boston Children's Hospital and Harvard Medical School, is 10 centimeters long and contains a battery, a motor, sensors, and wiring that connects to an external vest. The machine has the same goal as the Foker technique, but stimulates growth by gradually pulling a tissue segment, while monitoring and controlling the forces applied, leading to greater precision.

The group's implant is one example of a growing number of robots researchers are designing to carry out medical tasks on, and in, humans. As a cylinder 10cm long and 3cm wide, Damian's robot is relatively large. Other scientists are working on robots small enough to swallow. Eventually, these miniature medical machines could deliver drugs to specific locations, treat wounds, inspect hard-to-reach parts of the body, and even perform simple surgeries. 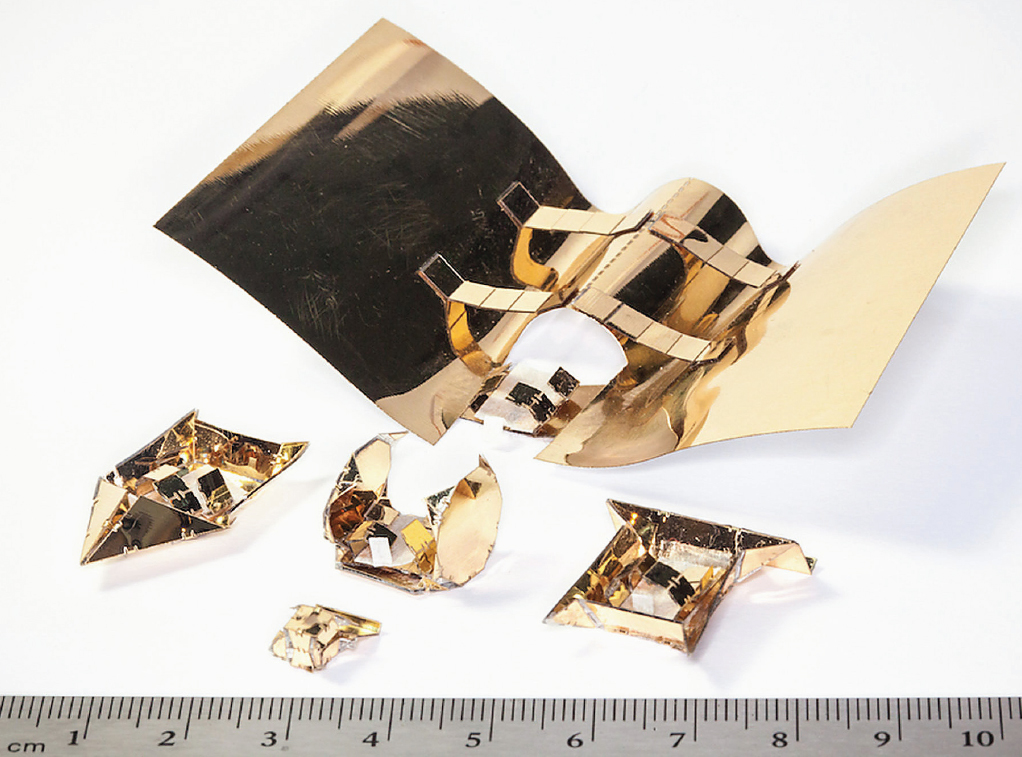 Figure. This tiny transforming robot can take on different forms, as needed.

In classic movies such as 1966's Fantastic Voyage or the 1987 film Inner Space, miniaturized robots and exploratory craft cruise through the body like high-powered submarines. Roboticist Eric Diller of the University of Toronto often shows his students the latter film to highlight some of the difficulties of building machines at this scale. The environment, for one, is far more challenging than it seems on screen. For example, adding propellers to a miniaturized robot, as in the movies, would not allow it to navigate the bloodstream; the speed of flow is too high, and to a miniature robot, Diller says the medium would seem more like honey than water.

Implanted in the esophagus, the robot developed by Damian and her group consists of concentric rings that promote tissue growth by expanding or moving apart from each other. A motor drives the expansion and sensors measure how much force is applied to the tissue, providing valuable feedback for the surgeons performing the Foker technique today, who rely largely on empirical training. This data is transferred via cable to a microcontroller in a small external vest, which then transmits it to a laptop via Bluetooth. In an animal experiment, the robot coaxed the esophagus into growing 77% over nine days.

While Damian's device remains in place for long-term therapies, researchers developing miniature machines have more mobile robots in mind. While the engineering obstacles are significant, the infection risks could be lower, since miniature or micro-robots could be swallowed as pills or inserted via tiny incisions.

Unlike the sci-fi movie versions, however, these tiny machines will not necessarily rely on miniaturized macroscopic technology. "We can't just shrink big robots," says Diller. "Below one centimeter, there are some fundamental limitations which make it extremely difficult to have a battery, motors, and a computer onboard. We have to come up with a totally different approach and rethink the problem in terms of design, locomotion, sensing, and control."

Experts say it is currently possible to miniaturize existing technology to about the scale of a beetle. Diller and other roboticists are attempting to build much smaller robots, which require an alternate approach, one that relies on external computation, navigation, sensing, and locomotion. This last piece is a critical first step, according to roboticist Metin Sitti, director of the Max Planck Institute for Intelligent Systems in Stuttgart, Germany. "We need to figure out how to get the robot moving in a controlled way in a complex environment," he says. "Then we can work on the other functions we want to achieve."

Sitti and his colleagues recently revealed a rectangular robot the size of a fruit fly that can swim, jump, and crawl. Yet the robot does not have a motor, battery, or navigation system. Instead, it is embedded with magnetic nanoparticles, and by using an external magnetic field, the researchers can drag it through an environment, induce caterpillar-like motion, or coax it to hold and then release cargo. "Our robot is basically an active smart material that we control from the outside," Sitti explains. "It doesn't have a computer or actuators or devices on it, but it's a remotely steered robot inside the body."

Researchers will still have to track these robots as they move inside the body. Diller's group and other projects are experimenting with ultrasound and Magnetic Resonance Imaging (MRI) scanners for this purpose. "We won't be able to have a camera watching," he notes. "This way, we can track our devices and have some kind of roadmap to help us guide them through the environment."

The unique environment of the human body has also forced researchers to rethink the basic principles of how to design a robot. Daniela Rus, director of the Massachusetts Institute of Technology Computer Science and Artificial Intelligence Laboratory, recalls how her group initially tried to deploy a miniaturized robot within a simulated stomach; occasionally, the robot would "land" upside down and remained stuck, unable to move. Rus and her colleagues realized they had to design a more symmetrical machine, one that could propel itself regardless of its orientation.

Eventually they developed an ingestible origami robot that begins in a folded arrangement, encased in a creative but simple delivery medium. "We packaged it as an ice pill and showed that we could control this robot to slide down the esophagus," she says. "When the robot gets to the stomach, the ambient temperature causes the ice to melt, and the robot deploys." The origami robot, guided by external magnetic fields, then could unfold. Eventually, using this mechanism, it could release a drug, or even patch a wound.

Sitti is considering similar applications. Since his group's robot has magnetic nanoparticles inside, he explains, it is possible to heat the robot using external Radio Frequency (RF) fields. "By heating the device, we can cauterize a wound," he says. "The temperature of the robot could stop the bleeding, or target and kill a cancer cell."

Finally, the tiny robots can function as miniature grippers simply by folding themselves around an object. Diller's group demonstrated this capability in their microbot, a hollow cube measuring 500 microns (0.05 cm) on a side that unfolds when a magnetic field is applied. The microbot can be triggered to grasp small objects by closing itself around them. Diller says it is being developed to perform non-invasive biopsies, and to remove samples from places such as the gastrointestinal tract.

A machine that actually cuts and removes tissue samples would require more than a remotely controlled smart material. Not only would the robot need some way of actuating or moving a cutting tool, but the miniature device would have to capture sensory feedback of the area to ensure the procedure is being carried out in the right spot. Adding this to a miniature robot today would be difficult, as it would require a light source and battery to power the camera. Diller says surgeons could use endoscopic cameras at the tissue site to provide high-resolution imaging feedback and complete the biopsy.

In the long run, though, researchers hope to be able to design micro-robots with sensing, locomotion, and decision-making capabilities in one package. Nature demonstrates that this is possible, according to Sitti; he cites bacteria, which make basic decisions and have their own means of propulsion, as examples. Yet he cautions these multifunctional robots will probably not act independently. "For safety reasons, I think that's the wrong approach, at least for now," Sitti says. "We will give the full control to the doctor, who controls the location and function of the device."

While Damian and her group have actually tested their device in an animal model, these miniature robots are still years away from being used in actual hospitals. Still, the researchers contend they have demonstrated the potential of the technologies.

"We're pretty excited," says Rus. "Just imagine surgical procedures without incision, without cuts, and without the risk of infection."

Gregory Mone is a Boston-based science writer and the author, with Bill Nye, of Jack and the Geniuses: At the Bottom of the World.