Students Help to Bring the Internet to Rural Africa

Residents of rural Kenya now have e-mail accounts and Internet access thanks in part to the work of University of Michigan engineering students who enabled satellite-based service at three locations there. Their work was supported by Google.

Only five percent of Africans have access to the Web, compared with 74 percent of North Americans. Over the past year, undergraduates in two of Thomas Zurbuchen's master's level space systems design classes devised and built a satellite-based system that could inexpensively and easily bring the Web to underserved Africa. In November, three students brought their system to Kenya and installed it with help from local organizations there.

Now, students in Patrick Spicer's Industrial and Operations Engineering class are gathering data to determine how the stations are being used and whether they can be built more economically. Spicer is a lecturer in IOE.

"The work of these students is having a global impact," said Zurbuchen, who is a professor in the departments of Atmospheric, Oceanic and Space Sciences and Aerospace Engineering and director of the Center for Entrepreneurship. "All of these students are taking a great idea, using the appropriate tools, and creating success." 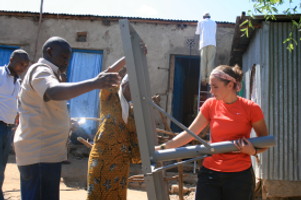 The classes where the project evolved offer hands-on, real world experience. Students must work with a sponsor to design a high-level space system. The 25 students on this project determined that the best way to provide Internet service in Africa would be to start by leasing space on existing satellites and developing ground-based receivers.

The ground stations they created use off-the-shelf technology and operate with solar power. The students realized that often, places without the Internet are places without reliable electricity.

Each station contains a four-foot satellite dish, a wireless router, a modem, a battery, a solar panel and a laptop, all kept safe from the weather in a metal shed. The laptop can be brought elsewhere, such as inside an adjacent community center for convenient use.

When the semester ended, most students moved on. But a handful stayed on the project to build the prototypes and take them oversees.

Kelly Moran, Trisha Donajkowski and Joan Ervin, who recently graduated with master's degrees in AOSS, brought the stations to Kenya. They spent 10 days there, hauling the equipment to various sites and working with residents and local organizations to install the Internet cafes.

Over G-mail chat, Moran still hears from the people she met there.

"I can't tell you how many nights I'll be online and someone is up over in Africa. They'll tell me, 'You don't know how large of an impact you've made here. We thank you every day,'" Moran said.

She has heard that they use the Web for research on medical issues or farming. They're setting up accounts. They're emailing documents that might have taken days to otherwise reach their destination. Some are even on Facebook.

The students never dreamed they'd actually have a chance to see their designs put to use.

"I had no idea that something we worked on in a class would become such a reality," Donajkowski said. "I remember the day I heard there was interest in redesigning the station and making a few to actually deploy in Africa. My heart jumped."

"When we started working on this project in the very beginning we were told that we would have the ability to make an impact on people's lives. I think that prospect really motivated all of the students," Ervin said. "When we landed in Nairobi, that's when it all became real. Our hard work had finally gotten us somewhere."

This project is dubbed IMAGINE Africa, for IMplementing A Global Internet NEtwork in Africa.

Also contributing to this project are Darren McKague, a research investigator and adjunct lecturer in AOSS, as well as the staff of the Wilson Center and the U-M Plant Operations Division. The College of Engineering also provided support for this project.

Is This Another Tech Bubble Bursting?

Bitcoin Is Failing Its Original Mandate

How to Teach Mathematical Disciplines for IT Specialties