The advent of three-dimensional (3D) printing is already yielding benefits in many fields by improving the speed and efficiency of product development, prototyping, and manufacturing, while also enabling true on-off customization to suit individual needs. While this is certainly a boon for manufacturers, 3D printing holds even greater promise when considering the possibilities for creating body parts or tissues to replace or repair organs or limbs that have worn out, become damaged, or have been lost to due injury or disease.

Indeed, significant ongoing research is being conducted at the university level into the use of 3D printing to create a variety of replacement parts for aspects of the human anatomy.

Unlike standard two-dimensional printers that affix toner to sheets of paper, 3D printers create objects by putting down a layer of a powdered substrate, heating it to harden it, and then repeating the process, layer by layer, building the item up to create a completed object.

The notion of using 3D printing (also known as additive manufacturing) to replace parts of the human body, a process known as bioprinting, was born out of a process initially developed 20 years ago, when surgeon Anthony Atala and his team at Boston Children's Hospital started to build novel tissues for regenerative medicine by hand. In this process, cells were harvested from patients, then painstakingly layered on top of one another to create handmade "scaffolds"; then the cells would grow and multiply, eventually producing functional tissues, including skin, bladder, and cartilage. 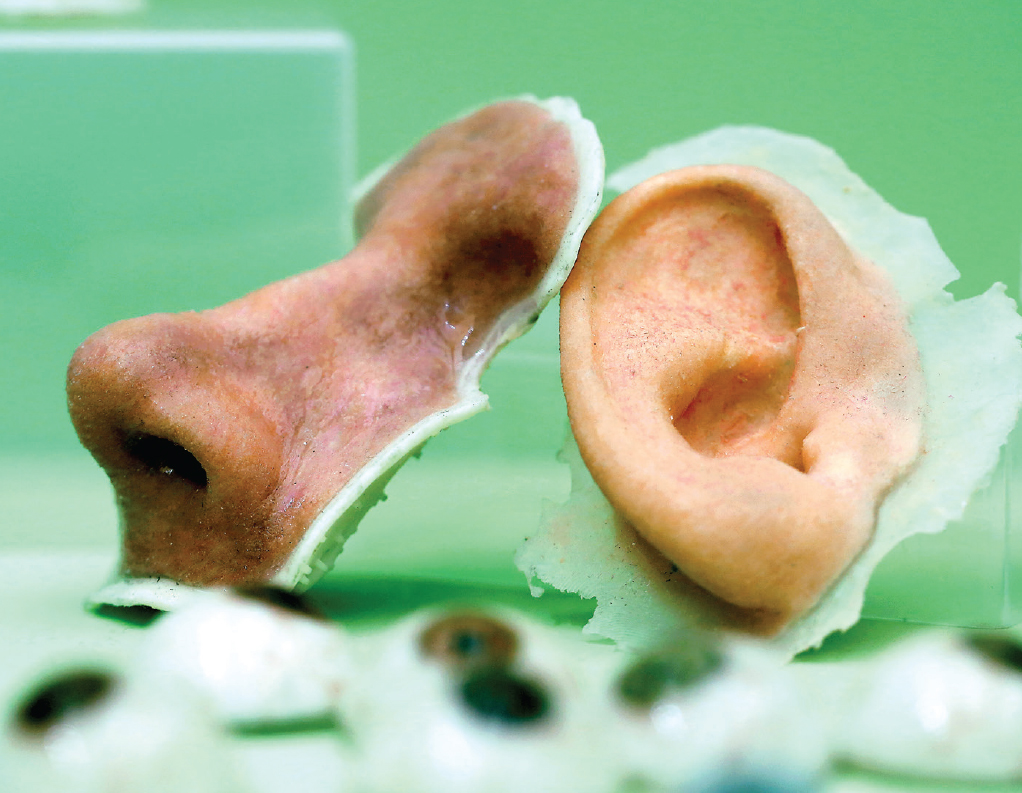 The process was far too slow and labor-intensive to be practical, so Atala's team, which had relocated to the Wake Forest Institute for Regenerative Medicine in Winston-Salem, NC, reconfigured standard desktop inkjet printers so they could use the inkjets to shoot out cells. The idea behind bioprinting is to use a small nozzle to precisely control the placement of cells, and the biomaterials around the cells, to form a structural framework, while also creating a construct that can deliver nutrients to ensure the cells' growth.

One of the key considerations with bioprinting is the need to maintain a 3D structure. The liquid "inks," which contain cells and structural biomaterial such as collagen, must gel as quickly as they are deposited, to maintain their form. The printers, with multiple nozzles, allow for the simultaneous printing of multiple cell types, structural biomaterials, and other chemicals. This, of course, requires significant pre-planning calculations to be made focused on cell density, type, and proportions of other supporting biomaterial prior to the printing, although according to researchers, much of this can be modeled by observing existing tissue taken from patients, and then replicating that structure with biomaterial.

More recently, Wake Forest University's Sang Jin Lee and his team have been working on the development of an integrated tissue-organ printer that can fabricate stable, human-scale tissue constructs of any shape. To ensure the shape of the tissue construct is correct, clinical imaging data is fed into a computer model of the damaged or missing tissue, and that model data is then translated into a program that controls the motions of the printer nozzles, which dispense cells to specific locations. The printer also incorporates micro-channels into the constructs, which allow the precise diffusion of nutrients to the printed cells, ensuring their survival.

The key benefit to using 3D printers is the ability to create complex parts relatively quickly and efficiently. "Using 3D-printing techniques, we can easily build complex structures," Lee says, noting that in a clinical situation with real patients, "you need more complex tissue and more control; 3D printing can provide that."

The Wake Forrest University team has successfully fabricated mandible and calvarial (skullcap) bone, cartilage, and skeletal muscle, and expects to conduct additional clinical trials over the next three to five years to demonstrate the effectiveness of its process.

Researchers on Long Island, NY, have addressed 3D bioprinting in a different manner, using relatively inexpensive consumer-grade 3D printers to print replacement body parts, including bone, cartilage, and a trachea. Indeed, Todd Goldstein, a 3D bioprinting researcher and director of Northwell Ventures 3D Printing Laboratory, Manhasset, NY, has printed tracheas made of living cells, using a Makerbot Replicator 2, a 3D printer that has been modified to print bio-material, at a cost of under $2,000.

Goldstein modified the Makerbot printer with a syringe that dispenses bio-ink, a material made of living cells with a viscous consistency. The nozzle that comes standard on the machine is used to emit an organic plastic called PLA (polylactic acid), which creates the scaffold of the trachea. The material costs just a few dollars, and is biodegradable in the body so only the body part is left after implantation is completed.

Goldstein says his team's work is mostly focused on bone, cartilage, and trachea printing, due to the current limitations surrounding the efficient and effective printing of constructs that support blood vessels.

The printing of complex body parts is likely still several years away. The soft tissue required to mend organs can be challenging to bioprint.

"The biggest issue on the whole right now is blood supply," Goldstein says. "You can't make the constructs too large without running into the issue of having a necrotic core (an area of dead cells) in the middle. Just like our body needs blood circulating all the time, so do these living tissues."

Studies have shown the printed tracheal tissue was just as strong as the tracheal tissue found naturally in mammals, and since the success of printed tracheas, the team has gone on to print other types of body parts, including bone and cartilage. These parts are particularly strong candidates for 3D printing because each individual will require uniquely sized parts. Furthermore, because bone, cartilage, and tendons don't require a blood supply, they can be implanted without the possibility of rejection.

Indeed, that is why the printing of more-complex body parts is still likely several years away. Creating pieces of soft tissue to mend organs such as the liver, kidney, and heart, can be quite challenging to bioprint, given the need to support constant, consistent blood flow.

"The biggest challenge is creating blood vessels that will work immediately," Goldstein says. "When you bio-print cells, if they don't have a blood supply, they'll be dead in five hours or less."

Goldstein acknowledges that at present, "there isn't a good solution for that right now. That's why a lot of research is going into 3D-printing small capillaries and a vascular network that can support larger 3D-printed constructs, like the liver, kidney, or heart."

What makes Feinberg's work unique is his approach to printing soft materials, such as arteries, which need to be supported while being printed so they don't fall apart. Feinberg and his team developed a method of printing soft materials inside a support bath material, which creates one gel inside of another, thereby allowing the structure to be printed while also being supported in the correct position.

"My lab has developed a number of novel 3D-printing approaches, where we put these gels inside of a support gel," Feinberg says. "We fill up a container with one gel, then drop a needle in the middle, and then print another gel with the [structure] material."

Another key challenge that Feinberg highlights is, "What you actually print is not what you're going to want in the end." He explains that the initial living tissue that is printed will need to be cultured and grown into the final structure that will be implanted into a human. "That is a total unknown right now, because we don't have good computer models for that process yet."

Feinberg contrasts bioprinting body parts with printing static parts used in manufacturing, where it is possible to model how a part will wear or function over time, based on previously known data from materials science and engineering work. "In bio-printing, the cells are highly variable, the biomaterial is also highly variable, and the interaction of the cells and material over time is just not understood at all," Feinberg says. "That's a huge area that needs improvement."

As a result, it is unlikely that 3D printing of biomaterial will become commonplace within the next few years, due to the significant amount of research and medical trials that need to be conducted.

There also are challenges around maintaining sufficiently high quality control, for both safety and health issues, as well as in keeping regulatory bodies, like the U.S. Food and Drug Administration, happy. Researchers agree additional tools are needed for assessing the quality of printed constructs so they are developing properly, and in the case of living tissue, sourcing and acquiring cells on which to model 3D-printed cells can be time consuming, expensive, or both.

It is unlikely 3D printing of biomaterial will become commonplace over the next few years, due to the research and medical trials still needed.

"There's broader challenges to bio-printing," Feinberg says. "We need a lot of cells, and some cells are just hard to come by, or very costly to get. For example, heart cells don't actually divide normally, and there's no real stem cell population to generate them in the adult heart." While Feinberg says it is now possible to use embryonic cells to grow new ones, it remains very costly to do so.

Wake Forest's Lee agrees, noting that the real challenges lie around printing complex organs. "We are trying to mimic original tissue as much as possible," Lee says. However, "for complex organs like the kidney and heart, we need better imaging scans and more cell types," Lee says. "Unlike simple tissue like bone or cartilage, the kidney requires more than 30 cell types."