A movement is afoot to vastly broaden available bandwidth by transmitting from LEDs (light-emitting diodes) using a technology known as Li-Fi, or Light Fidelity.

Rather than tapping Wi-Fi's radio frequencies, Li-Fi embeds data in the light waves emitted by LEDs. It leverages the digital nature of LEDs—which, after all, are semiconductors—by deploying a signal processor within a light fixture to rapidly modulate frequencies, loading full-on Internet data onto them. The modulations are so fast that they are imperceptible and flicker-free to the human eye, but a photoreceptor in a smartphone or laptop sees the signals and gathers them for conversion from photonic to electronic.

Bingo. The Web, delivered via light.

If seeing is believing, then be on the lookout for a public demonstration by pureLiFi, the Edinburgh-based LiFi pioneer that is working hard to commercialize the not-yet-ready-for-prime-time technology. The company is preparing to strut its stuff in Barcelona at the annual Mobile World Congress Feb. 27-March 2.

pureLiFi is hoping to repeat the success of a live demo by its chief operating officer Harald Burchardt at the LuxLive 2016 lighting exhibition in London late last year. There, Burchardt wandered under two specially equipped LED ceiling luminaires while holding a Microsoft Surface Pro tablet computer; the lights communicated with a USB dongle attached the tablet, delivering unfettered Web service. As Burchardt strolled back and forth, the lights took turns reaching the dongle, depending on which of the two was closer. 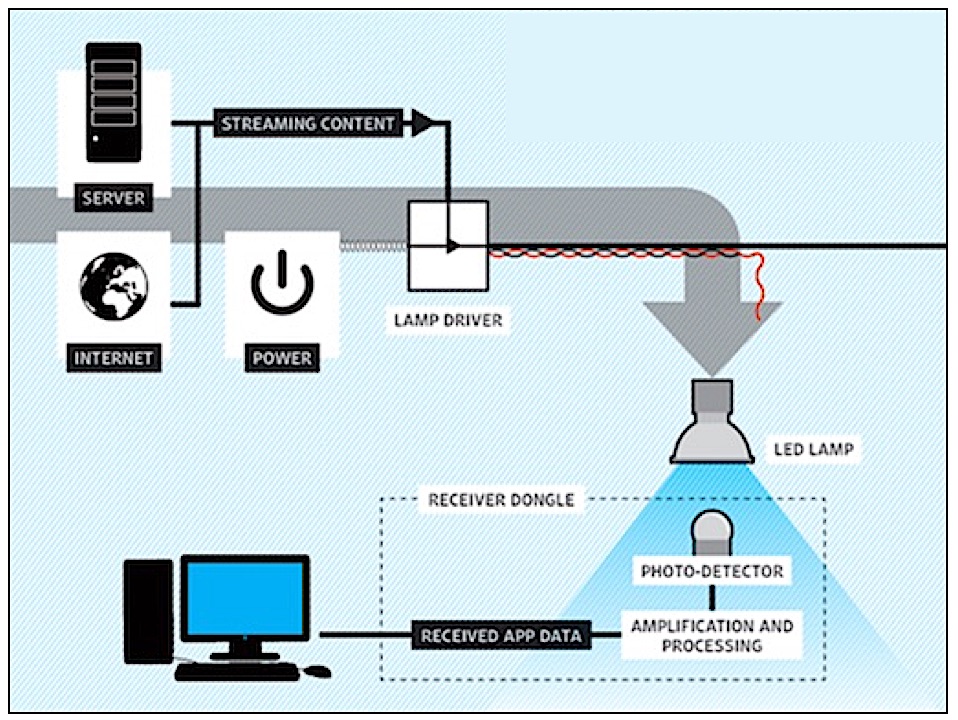 It was a marvelous technology display. It even had a hint of Marconi about it, proving that after years of transmitting via one medium, another is also possible. This time, however, the transition was not from wired to wireless, as it was at the end of the 19th century; rather, Burchardt showed “wireless” data no longer relies only on the radio frequencies of Wi-Fi, Bluetooth, cellular transmitters, and the like. A whole new type of spectrum, that of visible light, could open up for Internet delivery.

In a data-obsessed world increasingly facing bandwidth constraints, it is the opening up of the visual spectrum perhaps more than anything else that is driving development of the technology by a number of companies, including lesser lights like pureLiFi , as well as lighting industry giants such as Holland's Philips Lighting, which late last year bought the tiny French company Luciom for an undisclosed sum to buoy its Li-Fi capabilities.

“There are about 30 GHz of spectrum available to wireless communications,” Burchardt said at the London event, referring to the radio frequencies used for AM and FM radio broadcasting, television, cellphones, Wi-Fi, Bluetooth, ZigBee, and more. “But there are 300 THz of spectrum available for visible light; that's exactly 10,000 times more in light than in radio.”

As pureLiFi acknowledges, Li-Fi's advantage reduces to 1,000 times, not 10,000, if you count radio's extremely high frequency (EHF) band, which runs from 30 GHz to 300 GHz, where signals tend not to travel far and can drop when they run into something as common as oxygen. The relatively new “WiGig” radio technology operates in the EHF band, and while it is much faster than Wi-Fi, it will not travel as far.

It is the Wi-Fi function, in particular, that Li-Fi enthusiasts are eying. They see LiFi as a means to expansively complement Wi-Fi by providing Wi-Fi-like two-way Internet in public locations by using LED lighting infrastructure as well.

Li-Fi proffers other benefits as well. It does not interfere electromagnetically with other radio signals, the way Wi-Fi and cellphones can. It is also potentially more secure than Wi-Fi, at least in indoor settings, because light waves do not travel through walls into the tinkering hands of would-be hackers, as radio waves can. While some people claim that Li-Fi is also faster than Wi-Fi, speeds can vary; generally, Li-Fi seems to be at least on a par with Wi-Fi speeds.

Burchardt pointed out that in pureLiFi's approach, Li-Fi capacity could exceed Wi-Fi's, because each lighting unit serves the role of today's Wi-Fi routers, allowing facilities operators to take advantage of many more transceivers per area.

For all its potential, Li-Fi is not yet ready for mass adoption.

While pureLiFi has announced trial installations, and one Li-Fi vendor, France's Oledcomm, is working with the Paris Metro to install it in that city's underground rail system, neither provided interviews for this article.

Oledcomm's Paris Metro project, news of which first surfaced last year, appears to have bogged down. No one from Oledcomm or the Metro's parent organization, the RATP, would comment for this article

pureLiFi's trial deployments include commercial buildings in Paris; none could be reached for a progress report. A pureLiFi spokesperson said the company's users are currently bound by non-disclosure agreements. “As you can imagine, with new technology there are issues with confidentiality,” the spokesperson said.

In late November, pureLiFi said it is working with Singapore to trial Li-Fi. The city-state waived fees it would normally charge for the use of frequencies in such a trial. The announcement came a few months after Singapore's state-owned investment company, Temasek, led a Series B round of financing in pureLiFi; the Temasek funds comprise a large portion of the £9-million ($11.2 million) raised by pureLiFi to date.

A spokesperson for the Info-communications Media Development Authority of Singapore (IMDA), which regulates telecommunications and media in Singapore, said the organization “recognizes that Li-Fi has the potential to complement existing wireless networks to cater to society’s growing demand for high-speed broadband connection.  …Through the trials conducted by the industry, IMDA hopes to gain insights to the characteristics of Li-Fi technology and the technical considerations for deployment. With this information, IMDA will then be able to develop a conducive regulatory framework that will facilitate commercial deployment of such a technology. IMDA also hopes that the trials will identify other interesting and practical applications of Li-Fi.”

Neither pureLiFi nor IMDA offered any insight on how the trials are progressing.

It would hardly seem surprising that a nascent technology such as Li-Fi would have teething pains. One of the main challenges appears to be costs related to miniaturizing systems so laptops and other gadgets can house Li-Fi transceivers internally, without using dongles such as Burchardt and pureLi-Fi have been demonstrating.

“Today, the cost needs to come down by a factor of 50 to 100 to be competitive,” van den Bussche said. While internal radio transceivers cost around $25 to $30 in volume and can include multimodal options such as Wi-Fi, Bluetooth, and ZigBee, Li-Fi stacks cost more than $1,000 and often over $2,000, he said.

In the old chicken-and-egg conundrum, Li-Fi costs will decline as usage increases and manufacturers can hit greater efficient economies of scale.

But usage has to increase.

pureLiFi declined to elaborate on its specific costs, but said it is making progress.

“From 2015 to 2016, pureLiFi shrunk the technology by 14 times,” the pureLiFi spokesperson said. “pureLiFi is currently working towards miniaturization of Li-Fi technology. Ultimately the end-goal is to have Li-Fi in every mobile device. This means that the technology will be affordable for integration into handsets, tablets, and laptops. Ultimately the end-consumer will see minimal or no cost associated with Li-Fi, as the goal is to have Li-Fi imbedded in every wireless mobile device. I’m sure we all remember the days when Wi-Fi and Bluetooth were dongles; Li-Fi is going through the same evolution.”

Another impediment relates to line-of-sight requirements. For Li-Fi to work, gadgets have to be able to see the light, at least to some extent. At the LuxLive demonstration, pureLiFi's Burchardt explained that techniques involving reflectors and other tricks can alleviate some of that, but conceded such rigging will undermine performance.

There are other challenges too. Not all vendors, like pureLiFi, have worked out how to hand over transmission from one light to the next as the user wanders. At the same time, it is not clear how many devices a single light can support in the pureLiFi scheme.

Some industry observers also wonder if patent disputes are bubbling. pureLiFi claims co-founder and University of Edinburgh Chair of Mobile Communications Harald Haas is the “father of LiFi.” Besides pureLiFi, Oledcomm, and Philips/Luciom, vendors include Charlottesville, VA-based VLNComm, Estonia's Velmenni, and others. French company Lucibel is among the vendors specializing in luminaires that house Li-Fi hardware and software. Lucibel has itself partnered with pureLiFi and, according to one source, others. Lucibel did not reply to email queries.

A one-way technology called visible light communication (VLC) has made more inroads to date than two-way Li-Fi has.

As noted in CACM, a number of retailers are embedding VLC in LED ceiling lights to communicate to in-store shoppers, offering them promotions, information, and navigation around aisles. U.S. LED lighting company Acuity claims to have installed one-way “indoor positioning” systems based on VLC and other lighting-related techniques in 40 million square feet of retail space, having acquired VLC specialist ByteLight two years ago. Retail giant Target is experimenting with the technology in around 100 stores, although it has never revealed its supplier. Philips has a one-way VLC pilot under way with the aswaaq chain in Dubai, and with a Carrefour store in Lille, France.

Yet even one-way VLC is not yet a proven case. As Toric’s van den Bussche noted, big brands have yet to see a definitive business case. “There's plenty of information where, if you have a promotion at the edge of a row or in the middle of a walkway, everyone knows that it will increase your turnover on that product,” he said, referring to conventional retailing. “But what is the effect of having a promotional coupon coming to your phone? Brands aren't convinced yet that there's a business model.”

Meanwhile, more two-way Li-Fi implementations are expected to take hold. The U.S. Golden State Warriors professional basketball team plans to use it for outdoor Internet outside the new arena it plans to open in San Francisco next year according to some reports, although others suggest the technology will be used for one-way communication.

Li-Fi costs should continue to come down as usage grows. An anticipated investment by Philips in its recently acquired Luciom team is expected to help Li-Fi scale up. While Luciom has other technologies, it is its Li-Fi capabilities that Philips is believed to have coveted.

“We are committed to innovation and continue to explore new and emerging technologies,” is all a Philips spokesperson would say.

Venerable lighting companies like Philips are looking for information technologies like Li-Fi to help build a new business model for the lighting industry, which in the new era of long-lasting LEDs has had to ditch its century-old model of selling replacement bulbs.

PureLiFi co-founder Haas is known to laud his hero, telephone inventor Alexander Graham Bell, and to recount how Bell professed that the photophone, not the telephone, was the favorite of his inventions. The flawed photophone, created in 1880, carried voice communications over beams of sunlight, and was a precursor to fiber-optic communication, which didn't emerge until a century later.

Li-Fi boosters hope they won't have to wait nearly as long.

Mark Halper is a freelance journalist based near Bristol, England. He covers everything from media moguls to subatomic particles.

Dynamic Analysis in the Browser