If you could meet Ada Lovelace or John von Neumann, what would you ask them? Two hundred  young researchers from over 50 countries got to answer that question with modern-day counterparts at the fourth annual Heidelberg Laureate Forum (HLF), which gathered 21 of the world's most celebrated minds in math and computer science for presentations, workshops, and informal discussions.

The laureates included 13 ACM A.M. Turing Award recipients, as well as six with Fields Medals, three holding the Abel Prize, and one each with the Silver Plaque of the International Mathematical Union and the Nevanlinna Prize (some, including Turing Award recipient Robert Tarjan, have received more than one honor). Physics Nobel Prize laureate Brian Schmidt opted to stay for the entire event after giving an invited talk on "The State of the Universe."

Modeled on the Lindau Nobel Laureate Meetings, the week-long, invitation-only event is funded by the Klaus Tchira Foundation. This year's event drew 600 complete applications, from which 100 researchers each from math and computer science disciplines were selected by panels of scientsts nominated by the three award-granting organizations: the Norwegian Academy of Science and Letters, the International Mathematical Union, and ACM.

In her welcome address, ACM president Vicki L. Hanson affirmed her organization's "strong committment to the next generation of computing professionals, which is one of the reasons we're so excited to be a part of the HLF." 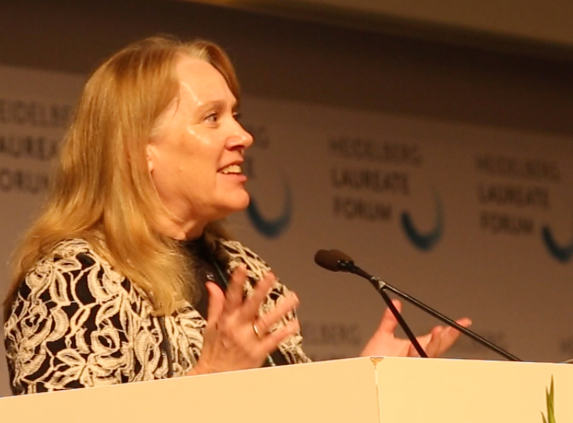 Each weekday morning except Wednesday, the program started with four 45-minute talks by laureates. Wolfgang Yarlott, an American Ph.D. student at Florida International University, found himself unexpectedly inspired from the very first talk, by 1986 Turing Award recipient John Hopcroft. "I'm using natural-language processing to examine culture and narratives," Yarlott said. "I'm in sort of a niche field: it's machine learning and natural-language processing, but sort of off in a corner. I found Dr. Hopcroft's talk incredibly interesting because he talked about hidden structures, which I think I could exploit to better get at what I'm actually looking for, which is unique cultural artifacts." 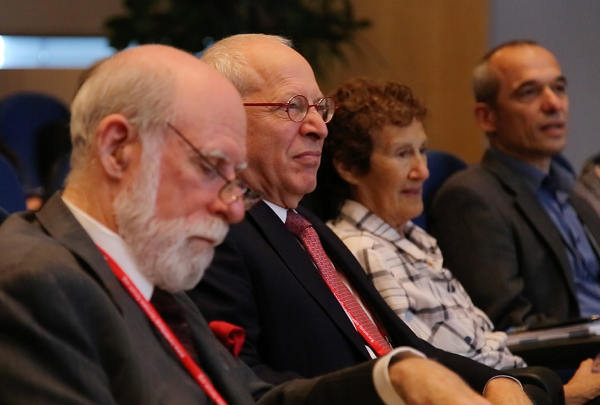 Afternoons featured face-to-face interactions including workshops, a poster session, and freeform mingling for both laureates and young researchers. Tuesday afternoon was given over to panel discussions about this year's "hot topic," artificial intelligence, with Turing Award recipients Vint Cerf (2004) and Raj Reddy (1994) as panelists. Wednesday was a day off, as laureates visited schools, and the young researchers explored relevant institutions, followed by a boat ride on the Neckar River.

It was the casual conversations that stood out in some young researchers' minds. "I was very surprised that the laureates are so approachable and so nice," said Tim Baarslag, a post-doctoral researcher from The Netherlands. "At first I thought maybe if I could meet one or two that would be awesome, and now I have I think the chance to meet most of my heroes. I just sat with John Hopcroft at lunch, and Stephen Cook (Turing 1982) was across from me, and Vint Cerf was also there, just having a conversation, and it was great." Dinner programs, including one at the famed Heidelberg Castle, provided further chances for serendipity into the evening hours.

The event has gained increasing attention from both the mainstream media and the scientific community, with this year's including the participation of Heidelberg University and the Heidelberg Institute for Theoretical Studies as partners.

Additionally, the organizers revealed the decision that the Forum would continue past its original five-year trial period, announcing dates for future Forums through 2022.

Andreas Reuter, scientific chairperson of the HLF Foundation, expressed pleasure at how the symbiosis between the laureates and researchers has developed. "The young scientists report that they found cooperation partners for projects, or got an idea for a project which previously they didn't have," he said.

"As for the laureates, Vint Cerf once said he thinks visiting a conference is worth his while if he goes away with at least three new ideas that he wouldn't have otherwise. And he's been at each HLF from the beginning, so that seems to work."

Tom Geller is an Oberlin, Ohio-based writer and documentary producer.

The Turing Test Is Obsolete. It's Time to Build a New Barometer for AI

Charles Babbage and the Loom