It is no secret Amazon is obsessed with speeding the pace of its deliveries; several recent service introductions for faster delivery underscore this point. For instance, Amazon Prime Air is the company's plan to fill the sky with drones to deliver orders within 30 minutes after being placed. Another attempt to enable more-immediate consumption is Amazon Prime Now, which allows denizens of select cities to submit an order and have a bicycle messenger knocking on the door with their goods within an hour.

Amazon has also filed some patents that indicate some of the innovative delivery ideas the company has conceived. One is "anticipatory shipping," delivering products to customers before they even place an order. According to the patent filing, Amazon is predicatively anticipating what their customers want, based on their previous order patterns; packages would wait at shipping hubs or on trucks until an order arrives, and then be immediately delivered.

Early this year, Amazon filed another patent which maps out a method for using industrial three-dimensional (3D) printing (also known as additive manufacturing, digital fabrication, rapid prototyping, and stereolithography). First seen in the mid-1980s as a means of rapidly developing prototypes, 3D printing is a speedier, cheaper alternative to machining metals, plastics, and other materials from which mock-ups might be fabricated. The technology takes a virtual design (typically a CAD drawing) and virtually "slices" it into layers; the device then constructs each layer sequentially, building layer upon layer until the item is complete.

Amazon’s patent outlines how the company intends to use 3D printing and mobile manufacturing hubs to get goods to customers fast. Essentially, when a customer orders an item online at the Amazon website, it would then be manufactured on demand using 3D printers, either in local warehouses or on trucks en route to the customer's doorstep. There could be a multitude of benefits to this: Amazon would need to stock less inventory, reducing the need for warehouse space (and workers), which in turn would reduce costs; additionally, delivering orders more quickly would increase customer satisfaction.

While not mobile, on-demand 3D printing services located at transportation hubs are already becoming a reality. Shipping-giant UPS has partnered with Atlanta, GA-based CloudDDM to create a 3D printing factory within UPS' worldwide hub in Louisville, KY -- which also happens to be the world’s largest package handling facility. The DDM in CloudDDM’s name stands for Direct Digital Manufacturing, and that is what it brings to the table; CloudDDM’s facility at UPS’ shipping hub in Louisville contains 100 3D printers that allow customers to manufacture one-off prototypes, or mass-produce thousands of the same part. Since CloudDDM has an "end-of-runway" location and UPS handles all of the logistics, it can knock six hours off the turnaround time on 3D printing. "There is going to be significant disruption to the supply chain, but there is also going to be great opportunity. That is why we partnered with UPS," says CloudDDM co-founder Rick Smith. "Use cases start to explode. If you are able to 3D-print at the same cost as conventional manufacturing, why would you not?" Smith says, adding, "it is going to take time, but it is going to be one of the most significant manufacturing developments in quite some time." 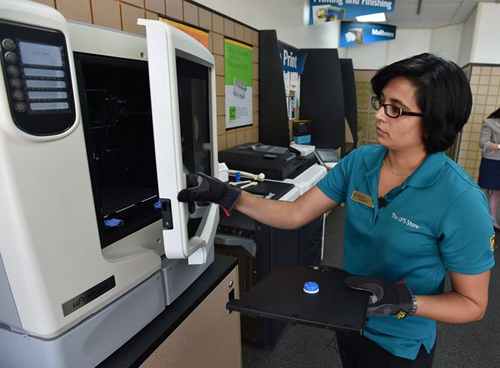 Three-dimensional printing in a UPS Store.

Says Tim Greene, research director for Hardcopy Solutions at technology research firm IDC, "A lot of the technology we are seeing to date has been targeted towards the consumer side of the market. But what is exciting is that other technology solutions such as selective laser (sintering, an additive manufacturing technique) are designed to deliver products that are functional, not just prototypes. That is why so many companies are interested in playing a role in the supply chain; they are not just being a mechanism in the delivery of products, but in manufacturing itself."

The U.S. Postal Service (USPS) is also investigating 3D printing on demand as a means of inserting itself deeper into the supply chain. A new report from the Office of the Inspector General (OIG) of the USPS recommends the service turn its postal processing centers into 3D printing hubs in order to generate substantial extra revenue for the cash-losing agency. "The U.S. Postal Service is particularly well-positioned if the 3D on-demand market takes off. They have the last mile to almost every destination in the U.S.," says Charlie Crum, USPS director of Mission Operations and one of the authors of the OIG report.

"Postal facilities can act as shipping nodes that can get 3D products into the hands of consumers more quickly," adds Christopher Backley, a public policy specialist at USPS OIG who co-authored the report. Yet, "The U.S. Postal Service is keeping an eye on the market, but nothing specific has happened yet," says Backley. "They’re trying to figure out what to do; they are waiting on developments."

O’Reilly Media CEO Tim O’Reilly, a long-time proponent of 3D printing, says on-demand 3D printing is one of several recent advancements that have helped to dramatically reduce costs. "Without the tooling costs of injection molding or the engineering complexity of machining, product creators can iterate rapidly through many different prototypes to arrive quickly at an ideal design. Printing services like Proto Labs have already become an important part of the prototyping process."

O’Reilly believes 3D on-demand hubs and service bureaus will gain traction in the market. "A few years ago, the future was a printer on every engineer's desk. We've seen some outstanding desktop printers emerge, like the SLA machines from Formlabs, but for higher-volume work, on-demand services look like they'll be the model for the long term. That reflects the cost, complexity, and production advantages of the highest-end printers, as well as advancements in business processes: service bureaus can use sophisticated CAM software to quote orders and manage production, then fabricate parts and ship them overnight - and frankly, the bar for on-demand delivery of many products ordered over the internet is starting to be ‘same day’. At that rate, there's not much to be gained from maintaining a printer in your office."

What About 3D Printing on the Truck?

What about Amazon's patent filing for 3D printing on the truck en route to delivery? "I don't know that the juice is worth the squeeze," says CloudDDM's Smith, who explains, "that technology is 50 years away. When printing in layers, the object needs to be completely level. It would be almost impossible to do today." 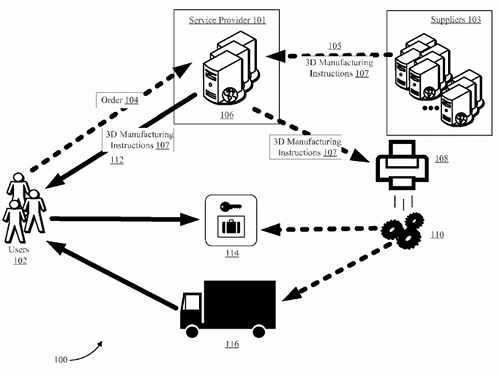 To USPS OIG's Backley, 3D printing on the truck is "an interesting notion, but most observers would agree there is a lot of advancement in both technology and materials that needs to happen. I can see this occurring in the future, but right now it’s not practicable. You need to have the right conditions – temperature and humidity – I have a hard time imagining a conducive environment for 3D printing inside a moving truck."

USPS’ Crum adds, "There are a lot of technological hurdles that need to be overcome. Is it really worth the effort? It is fascinating, but I am not sure how they would do that."

Says IDC's Greene, "I certainly would think it would be a stretch right now to locate in an environment like that. Precision equipment shouldn’t get bounced around."

To date, rules issued by the U.S.Federal Aviation Administration have made it all but impossible for Amazon to deploy a fleet of drones to deliver packages (at least until those rules are revised, late next year or early in 2017), and there has been no indication the Internet retailer plans to develop the anticipatory shipping system outlined in its patent. Even if Amazon never develops the capacity to provide on-demand 3D printing on trucks, it appears the company will always be seeking innovative ways to get orders into the hands of its customers more quickly.

John Delaney is a freelance technology writer based in Brooklyn, N.Y.

How AI Could Accidentally Extinguish Humankind