The risks of privacy invasion and identify theft are no longer restricted to the relatively infrequent break-ins to supposedly secure databases by hackers, foreign governments, or high-tech criminals. All a nefarious person needs today is a digital camera like the one found in the cellphones we all carry; snap a photo, and even people in the background can be easily identified by doing a search by image on Google or Facebook. From your name, hackers can often harvest your habits, associates, email address, physical address, telephone number, and sometimes even your Social Security and credit card numbers using a combination of public and phishing compiled databases, according to Isao Echizen, a professor at the National Institute of Informatics (NII) in Tokyo.

"Our faces are a type of ID which can be easily shared in the cyber world and linked to profiles with face recognition algorithms," Echizen said.

Echizen wants to nip such invasions of privacy in the bud before they become epidemic, with his PrivacyVisor. He claims to have identified the common principle by which facial recognition programs do their magic, and has devised a simple pair of sunglass-like spectacles that mask your identifying features so you cannot be identified.

Echizen has been working on foiling face recognition algorithms for a number of years. In 2013, he published details about a method of masking the Haar-like features almost universally used by facial recognition software.

He then began creating spectacles with embedded light-emitting diodes (LEDs) to illuminate the eyes and nose, but has evolved to a passive design of masking the Haar-like features used to identify faces, namely the eye and nose regions that appear darker when compared to the cheeks. The PrivacyVisor makes the eyes and nose region brighter than the cheeks, thus preventing facial recognition systems from identifying one’s face.

"The purpose of the PrivacyVisor’s technology is to establish a method that prevents identification of a person being photographed without causing physical discomfort," Echizen said. "Now we can all take control of our own personal data by equipping ourselves with eyewear specially designed to make the face in captured images undetectable by face detection algorithms."

The PrivacyVisor does that by using an upward-sloping front frame with a wraparound, semitransparent white sheet fitted over the frame. A semi-transparent white camouflage pattern of holes puncture the sheet making the area around the eyes and nose appear brighter than normal so facial detection algorithms cannot detect the wearer's face. The upward-sloping frame also reflects incoming light frontward, making it much brighter on the area around eyes and nose than ordinary glasses, which are downward-sloping. To the user, however, it very lightly obscures vision, allowing people to converse and interact in a normal manner. 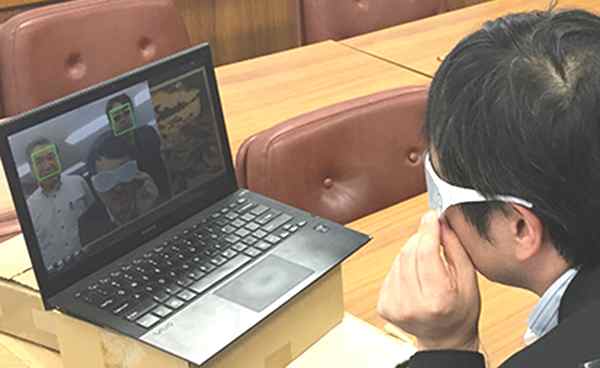 The PrivacyVisor was funded by a Kickstarter-like crowdfunding site in Japan called Faavo, which achieved its goal (two million yen, about $17,000) in about two weeks.

Despite its quick funding, not everyone believes the PrivacyVisor will be successful, citing the oddball way it makes people appear to each other perhaps being acceptable in some cultures, but not in others.

"I am not sure if many people will want to buy the PrivacyVisor. Perhaps some celebrities may; however, I am sure it will cause a very interesting controversy," said facial recognition expert Shin'ichi Satoh, director of the Digital Content and Media Sciences Research Division at NII. He suggested misuse, like using the PrivacyVisor to shield one’s identity while robbing a bank, "may happen, but I believe the chances are slim.  If one wants to do something malicious without being detected, there are much more aggressive ways to hide oneself.

"The aim of the PrivacyVisor is to hide the wearer from being detected, but still let them enjoy social activities, since it does not prevent other people from identifying their friends and communicating with them using facial expressions and gestures."

Echizen acknowledges the PrivacyVisor could come to be considered a security threat at banks and airports, which now depend on facial recognition software to spot known bank robbers and terrorists, respectively. He says regulatory bodies like the Federal Aviation Administration and the Federal Deposit Insurance Corporation should regulate or prohibit its use under certain circumstances.

Echizen has licensed the PrivacyVisor to Japanese eyeglass frame maker Sabae, which plans to start selling it in Japan in mid-2016 for 30,000 yen (~$250); distribution in the U.S. and Europe is slated to begin later in 2016 or early in 2017.

How Ukraine Has Defended Itself against Cyber Attacks