Can scientists and artists work together, learn from each other, and create beauty from nanoscale structure and function?

Those questions are being explored in the Cornell Council for the Arts Biennial, "Intimate Cosmologies: Aesthetics of Scale in An Age of Nanotechnology." The inaugural Biennial at Cornell University is a platform for scientists and artists from the cutting edges of their respective disciplines to blend their strengths and interests in the form of exhibitions, symposia, and more.

"Creativity is not owned by any particular field or discipline, but at a research university, at a macro level, we are all engaged in a kind of high-level creativity," said media art professor and biennial director Stephanie Owens.

All the exhibitions have a nanoscale theme, in an effort to explore the boundaries of scale for artists – "this invisible, intangible realm," Owens said.

Among the most striking examples is a project by Robert Hovden, a Ph.D. student in applied and engineering physics, whose day job involves studying two- and three-dimensional materials at the atomic scale with electron microscopes.

For the Biennial, Hovden explores issues of intellectual property by displaying copyrighted invisible paintings. Using a focused ion beam, a sort of multitool for nanoscale etching, he inscribed famous works of art onto industry-standard silicon wafers,

"I was excited that the [Cornell Council for the Arts] was willing to support an abstract idea like this," Hovden said. "The ethical lines of plagiarism and copying are blurred because we do this all the time, even when downloading bits onto the computer. Really all the information when you visit a website is being copied onto your hard drive, at the nanoscale … we are always copying these things without permission," he said.

Art and artistic expression below the wavelength of light is plentiful throughout the Biennial. Featured in the middle of Cornell’s Arts Quad is a 46-foot structure resembling a needle designed by Korean artist Kimsooja, the Biennial's artist-in-residence. 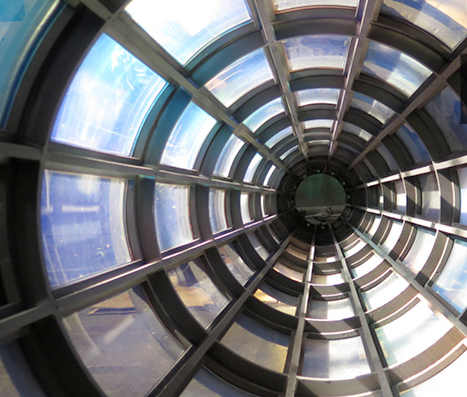 The iridescent effects of the material she used are rooted in nanoscale phenomena. Her collaborator was Uli Wiesner, a renowned materials scientist whose lab makes functional materials of out polymers.

In the lab, Wiesner and his students helped Kimsooja create hundreds of panels of block co-polymer films with a specific refractive index, inspired by butterfly wings.

In the process of this gargantuan creation, Wiesner was struck by some unexpected revelations about his own work. "One thing I learned from this intersection with Kimsooja is that her work is all about emotions and feelings," he said. "And in science, at first sight, you think, well, where is the place for that?" However, he realized, "In science, and in the process of doing science, everything is about emotion."

Juan Hinestroza, a fiber scientist who worked on an exhibition with design professor So-Yeon Yoon and chemist Ruya Ozer, said he became a better chemist by being involved in the Biennial. "There is equal complexity in designing a molecule, and in designing a dress, or a house, or a building," Hinestroza said. "Perhaps, because you are not involved in those activities, you disregard them." He continued, "As scientists, we usually take a big problem and divide it into small pieces … but designers see the final piece. They don’t know how to get there, but they can envision it."

Hinestroza, Yoon, Ozer, and their students designed an educational exhibition in which metal organic frameworks grown onto cotton fibers fluoresce red or green in the presence of ultraviolet light. Hinestroza’s lab makes these functional fibers – materials that can be used for things like wearable poisonous gas sensors, or clothing that repels bacteria.

For Yoon, the challenge was artistic expression within the invisible realm, which stretched her abilities as a designer. Using Hinestroza’s field emission scanning electron microscope images, Yoon created videos for the exhibition that show, in breathtaking detail, the infinitesimal scale at which Hinestroza and Ozer’s nanorods work to create color change.

Using the composition and structure of metal organic frameworks at the nanoscale as an artistic medium was a "luxury" made possible by her scientist friends, Yoon said. After all, designers are constantly drawing inspiration from nature, she said, and that includes phenomena at scales too small to see.

Anne Ju is a science and technology writer in Ithaca, NY.

R&D or r&d: What's the Difference?