Google and Edx Put ‘youtube For Courses’ Platform on Hold

The MOOC.org online course creation platform, announced with great fanfare by Google and edX a year ago, promised to let individuals create and host their own courses. While the platform has led to some expansion of edX's course providers, the "YouTube for courses" (as edX CEO Anant Agarwal calls it) has yet to take shape; that is now "likely to happen some time in the fall," says Agarwal.

Until the announcement of MOOC.org, courses offered at edX were created by a limited selection of university partners. The proposal to open the platform to individual course providers attracted a lot of attention, but also raised some eyebrows. Chronicle of Higher Education technology editor Jeff Young says, "I was really curious about that aspect—it does seem in some ways contradictory with the edX project. They've worked with top-tier universities. How they would make these two worlds play together?"

In the months since the announcement, the open source Open edX platform has reaped a lot of benefits from the Google partnership, according to both Agarwal and Google. "We see Open edX as an innovative solution for course creation and over the last year have worked alongside edX to contribute to Open edX," says a Google spokesperson. "A few examples include adding an authentication library to Open edX, which enables Google login as well as other federated log-ins, making Google+ Hangouts publicly available for course integration, as well as close integration with other Google Apps and various tools." 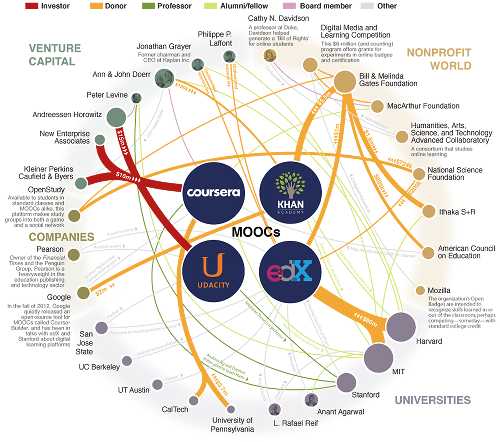 As for the MOOC.org site itself, edX has used it as a way of finding out what users might want, and moved to address those desires in other ways. "We took a poll on MOOC.org and asked, 'How would you like to use the platform?'" Agarwal explains. They received more than 5,000 responses. "What we found is that the people who came into MOOC.org fell into roughly four categories. So we took a phased approach."

First, edX heard from organizations that wanted the same relationship as the company's existing partners: "A number of universities and foundations and others simply wanted to offer their courses on edX," says Agarwal. "They wanted what we were doing with the partners we already had," which included getting the benefit of edX's training and support. To address this group, the company its membership to open it to a broader swath of course providers. The expanded membership structure was announced in March, and organizations that have taken advantage of the opportunity include the Smithsonian Institution, the Learning by Giving Foundation, and the International Monetary Fund (IMF).

The second group of users wanted what Agarwal calls "open source hosting," to host their own material on their own servers while using edX's open source course delivery platform. Examples of this category include Stanford University and xuetangx.com, which hosts the Open edX software on servers in China and offers courses in Mandarin Chinese.

A third category asked to be able to create the appearance of hosting their own courses without incurring the IT and server overhead required—"let's call it a 'hosted white label platform,'" says Agarwal. "A number of universities, corporations, and others wanted someone to host the platform for them under their branding." To address this category, edX began hosting such courses for a few clients; examples include Tenaris, a South American steel manufacturer that uses the platform for corporate training. The IMF started out in this category, but became a member of edX when the membership structure opened up.

edX has also allied with some partners that can offer the white label hosting service. "They're approved by edX, have a relationship with edX, but they will host the platform for you," says Agarwal. "We began promoting that option about six months ago." Such partners include Knowdl and Rean Cloud.

Finally, there was the group that attracted the most attention—individuals and organizations that wanted a place to create courses and make them available to the public on their own. When the platform is finally opened to that group, the courses will likely be hosted at MOOC.org—"it's a nice domain name," says Agarwal—but the company is still working out the business model, what the site will look like, and other details.

Google remains committed to the partnership, says its spokesperson: "We continue to contribute to the Open edX code base and are in contact with edX for MOOC.org. We are excited where edX is going, and see edX as leaders in open online education."

The delay probably offers edX some ancillary benefits, says Young. "In a way, it emphasizes that edX is focused on their platform." By addressing different use cases, says Young, edX has had the chance to experiment with the platform, which could prove crucial when it comes time to let people create their own courses.

Logan Kugler is a freelance technology writer based in Clearwater, FL. He has written for over 60 major publications.

One Man's Dream of Fusing A.I. With Common Sense