Specialists Gather in Praise of Logic

It was the largest scientific gathering in the history of logic; more than 2,000 researchers, academics, and students came together at the Vienna University of Technology (TU Wien) July 9-24 for the Vienna Summer of Logic conference to present important results, consider emerging trends, and offer new challenges in symbolic logic.

The scientific mega-event consisted of almost 100 sessions and workshops, a multifaceted public outreach program, and the first "Olympic Games of Logic" ever. Most importantly, the Summer of Logic gave impressive evidence of the relevance and the impact of logic today.

"It was an absolutely amazing scientific event," said Rice University’s Moshe Vardi (who is editor-in-chief of Communications). "The richness of this meeting was unparalleled in the history of logic and in my own career."

The Vienna Summer of Logic, organized by the Kurt Gödel Society, had three tracks representing the major currents in this field: computer science, artificial intelligence, and mathematical logic.

This year’s Federated Logic Conference (FLoC, an aggregation of several mathematical logic and computer science-related academic conferences) was part of the Vienna Summer of Logic, which combined a total of 12 major conferences, 81 workshops, and 1,781 scientific talks, nearly double the number offered at the previous FLoC.

The Vienna Summer of Logic saw the launch of the first "Olympic Games of Logic" (with the motto "Citius, Maius, Potentius," Latin for " Faster, Bigger, More Powerful"), featuring competitions between cutting-edge implementations of logical methods with real-life applications, such as SAT solvers. The winners received medals with an engraved portrait of Kurt Gödel. These Games started a new academic tradition: like the sporting Olympic Games, they are set to take place every four years, as a part of FLoC.

A goal of the Vienna Summer of Logic was to connect the general public with logic and computer science, and to convey the importance of this field. A public exhibition at the Academy of Fine Arts Vienna portrayed the life of Kurt Gödel "and the Origins of Logic in Vienna," while an extremely well-attended series of panel discussions called "Logic Lounge" offered logicians the opportunity to present their science to the public. In addition, public lectures were staged on the history of logic in the 20th century. 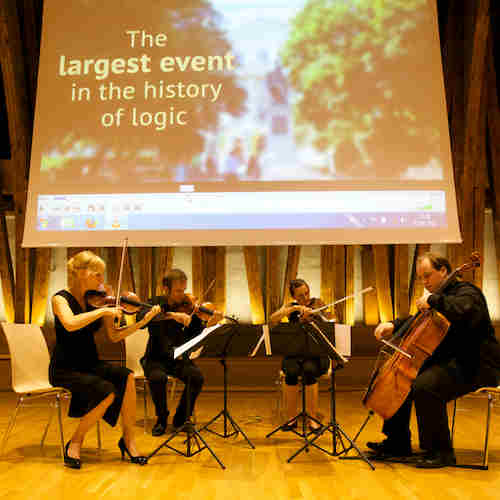 Vienna has a proud tradition in logic. In the Vienna Circle of logical empiricism led by Moritz Schlick in the 1920s, logical methods were applied to philosophical theorizing. This groundbreaking movement was significantly influenced by the work of Gottlob Frege, Bertrand Russell, David Hilbert, and Ludwig Wittgenstein’s Tractatus Logico-Philosophicus (Latin for "Logical-Philosophical Treatise").

The Vienna Circle motivated the fundamental theorems derived by Kurt Gödel around 1930 in Vienna, regarded as some of the most important mathematical results of the 20th century.

Over the last few decades, mathematicians and computer scientists working on logic in Vienna have re-connected with this notable past, and have put Vienna back on the global map of logic. "The Vienna Summer of Logic honors and commemorates the great minds of the past by presenting the progress of modern logic in a place which helped shape the early history of the field," said Helmut Veith, a professor at Vienna University of Technology (TU Wien) and CMU, and one of the event’s organizers.

At its core, the Vienna Summer of Logic served the purpose of connecting the leading minds in a variety of logical sub-disciplines.

"It has been a thoroughly enjoyable and intellectually stimulating mega-gathering of inquiring minds," said Nachum Dershowitz of the University of Tel Aviv). Tobias Nipkow of TU München added that the Vienna Summer of Logic was "the most exciting conference I ever attended, and a tough act to follow."

Read more about the Vienna Summer of Logic here.

Florian Aigner is a science editor in the Department of Public Relations of the Vienna University of Technology.

Automation and the 'Winner Take Most' Effect

AI or Intelligence Augmentation for Education?