A satellite on a "Repeat Ground Track Orbit" (Repeat Orbit for short) passes the same points on earth on every orbit at a known repeat period. Equatorial orbits (satellites that orbit the equator) are obviously Repeat Orbit but others can be too if they are timed just right. For example, if an orbit took 24 hours (well, 23 hours, 56 minutes and a little over 4 seconds) then a polar orbit would be a Repeat Orbit.

So, if the orbit period is T, the coverage times of a single satellite is a sequence of disjoint begin-end times bi, ei.

The orbit designer can specify that satellites are placed in orbit at certain time differences between them, for example, satellite A may be m1 minutes before satellite B in the orbit and B may be m2 minutes before C, and so forth.

An easy lower bound on the required number of satellites so that at least one satellite is in contact with at least one ground station at all times is: 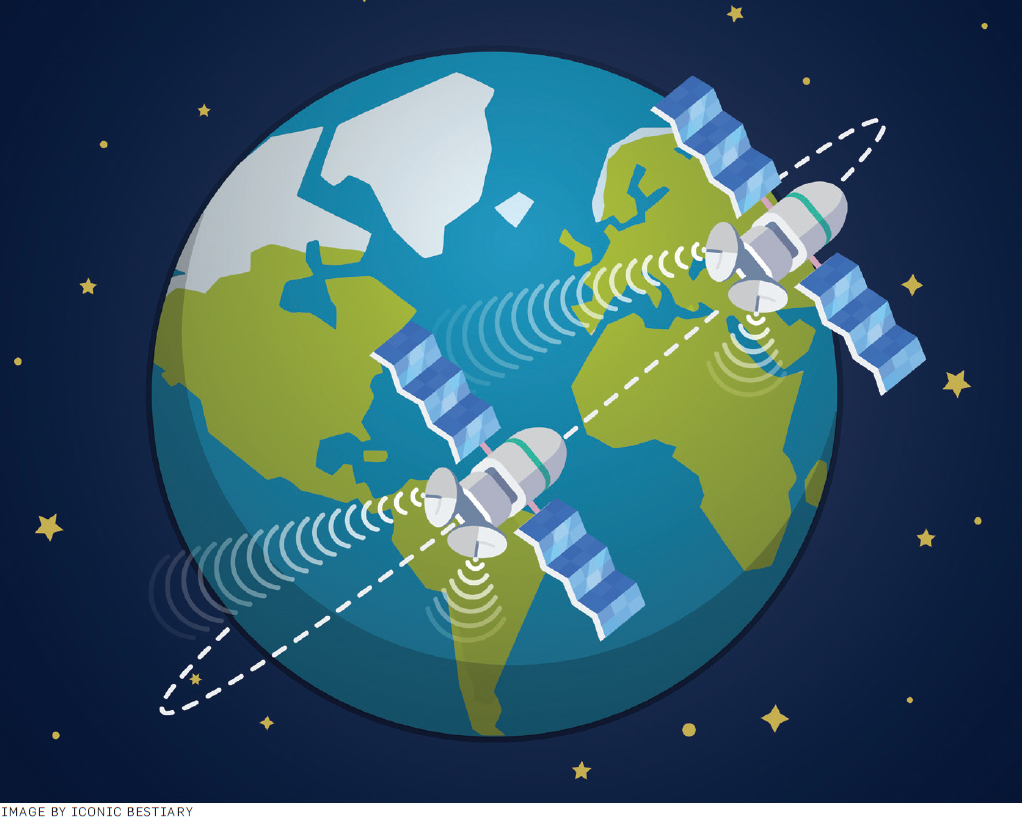 Figure. If the coverage map is 10..60 for a 90-minute orbit, when in the orbit should each of two satellites start in order to give full coverage?

This expression is the orbit time T divided by the total coverage times during an orbit. Note that because the last interval must begin before T but might end in the next orbit, we allow the last end point to have a value greater than T.

An optimal design (one requiring the fewest satellites) may have no satellite starting at time 0 in the period.

Warm-Up: Suppose the coverage map is just the single interval 10..60 for a 90-minute orbit. When in the period should the satellites begin?

Satellites can be characterized by the intervals within their orbital periods during which they are in line-of-site communication with at least some ground station.

Achieving the optimal bound may not always be possible though.

Warm-Up 2: Suppose satellite A starts the orbit at time 0. Suppose further that the second satellite B starts at time 31 in order to cover minutes 31 to 46. Would there be gaps in coverage?

That particular schedule did not work, but might another one work better?

Question 2: Can you add a third satellite to achieve full coverage?

Solution to Question 2: With respect to the design of Warm-Up 2, adding a satellite C that starts at 61 is one of many solutions.

Now that you understand the problem, here are some upstart questions, some of which might be NP-complete.

Upstart 1: Given a coverage map, can you find a minimal set of satellites and their time offsets allowing no gaps.

Upstart 2: Given a coverage map, can you find a minimal set of satellites and their time offsets allowing k gaps of up to p minutes each.

My NYU colleague Ernest Davis pointed out the simplest greedy algorithm—choose the offset that covers the most uncovered time—is in fact a (very) special case of the greedy algorithm for the set-cover problem, which is known to be within a log factor of optimal. It is easy to construct examples where the greedy algorithm gives a solution that is close to twice optimal, but we do not know of anything between those two bounds.

Davis and Scott Aaronson of the University of Texas, Austin, TX, also looked into the specific solution where, at every time, exactly one satellite can communicate with the ground. It turns out this is a difficult problem that has been extensively studied and not entirely solved; it is called the problem of "translational tiling."

Virtual Reality Has Arrived in the Art World. Now What?

It's Too Late for Meta to Win over Washington