There is one perfectly flexible but unbreakable rope attached to two posts on a large but unkempt lawn. The posts are 1,000 meters apart and the rope is 1,100 meters long. So there is some slack in the rope.

A randomower is a driverless lawn-mower that moves randomly and is able to change direction by an arbitrary angle at any time. Fortunately, it can be clipped to the rope so it will not wander off too far. You are trying to use this random lawnmower to cut at least part of the grass between the posts. Let the rope's zero point be at post A and its end point (1,100 meters away along the rope) at post B.

Suppose you wanted to cut the grass to clear a path, that is, a line segment at least the width of the lawnmower itself, between the two posts. It is OK if more grass is cut to the side of the path, but you want to ensure you have a straight continuous path. The first challenge is to do this with the minimum number of attachments.

Warm-up: What is the smallest number of attachments necessary to mow a straight line segment (and, optionally, other grass) from post to post? 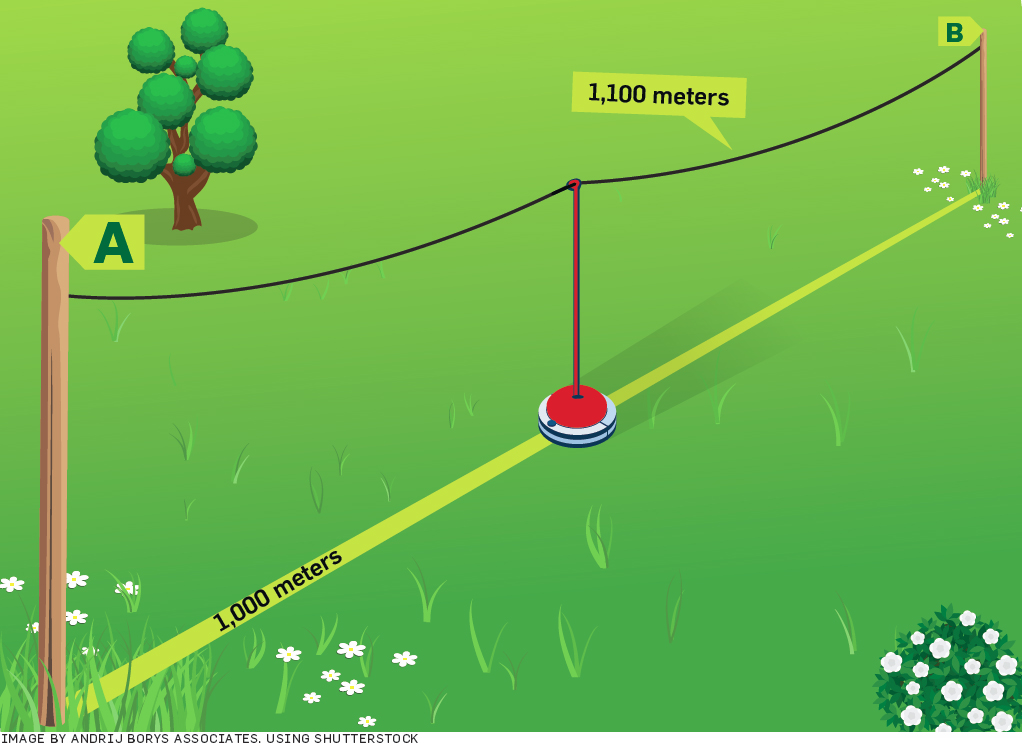 Figure. What is the maximum area this randomly moving lawnmower (randomower) can mow, while staying attached at a single point on the rope?

Now, let's reset the lawn to its unkempt state and ask a few other questions. If we were to attach the randomower to a single point along the rope, where should we attach it to cut the greatest area of grass? It might seem that near an end might be best, though symmetry suggests the middle.

Warm-up 2: Given some attachment point p = 400 meters from post A, what would be the maximum width of the mowed area?

So, now we can ask where would be the best place to attach randomower to achieve the largest area.

Challenge: What would be the area of the mowed grass if you attached the randomower to the 550-meter point along the rope?

Solution: Denote by Pup and Pdown the most extreme points on either side of the line segment between A and B when attaching randomower to the 550-meter point along the rope. To compute the area, we must consider the pie-shaped area defined by A and the arc from Pup to Pdown and subtract from that the area of the triangle defined by A, Pup, and Pdown. Then we do the same thing starting from B.

Suppose randomower is attached at 550 meters along the rope. Let point P be the point exactly between A and B. Consider the right triangle defined by post A, point P, and point Pup. The distance from P to Pup is sqrt((5502) - (5002)) or 50 * sqrt(21) on each side of the line segment, which is approximately 229.

Given this geometrical intuition, you are now prepared for Upstarts.

Upstart 1: If there are k attachments available, where should you put them to mow the greatest amount of area?

Upstart 2: How many attachments are needed to draw a segment of width w for some w less than 70 and where should those attachments be placed?

Upstart 3: Suppose A and B play a game in which each wants to use attachments that cut as much of the lawn as possible. They take turns as follows: A makes the first attachment. Then B makes two. Then A makes two. This goes on until each makes the same number of moves (A determines when to make last move by making a single attachment). Each player gets credit for every part of the lawn that is first mowed by randomower due to an attachment by that player. Please find a winning strategy for some player.

Dennis Shasha (dennisshasha@yahoo.com) is a professor of computer science in the computer science department of the Courant Institute at New York University, New York, NY, USA, as well as the chronicler of his good friend the omniheurist Dr. Ecco.