Home/Magazine Archive/August 2017 (Vol. 60, No. 8)/Is the U.S. Education System Ready For CS For All?/Full Text
Education

Is the U.S. Education System Ready For CS For All?

The increasing focus on K-12 computer science (CS) education in the last few years has been driven by two key factors: producing enough computing professionals to support the workforce and drive innovation, and ensuring that this workforce is sufficiently diverse to represent all perspectives. However, the diversity gap persists. Stereotypes and educator biases start young, as early as preschool.1, 2, 3 One way Google is contributing to CS education efforts is through new research that identifies structural and social barriers, as well as strategies to overcome them.

This column presents insights derived from the Google-Gallup national research. With CS education relatively young in the K–12 space, our multi-year study sought to understand the context of K–12 CS education. Over two years, we surveyed about 16,000 nationally representative students, parents, teachers, principals, and superintendents across the U.S. in the fall/winter of both 2014–2015 and 2015–2016. Students, parents, and teachers were surveyed via telephone while principals and superintendents were surveyed online via an email invitation. We also designed the study with a focus on diversity—particularly girls, Blacks/African Americans, and Hispanics/Latinx. We wanted to uncover any structural barriers as well as social perceptions and biases that may be affecting these groups. 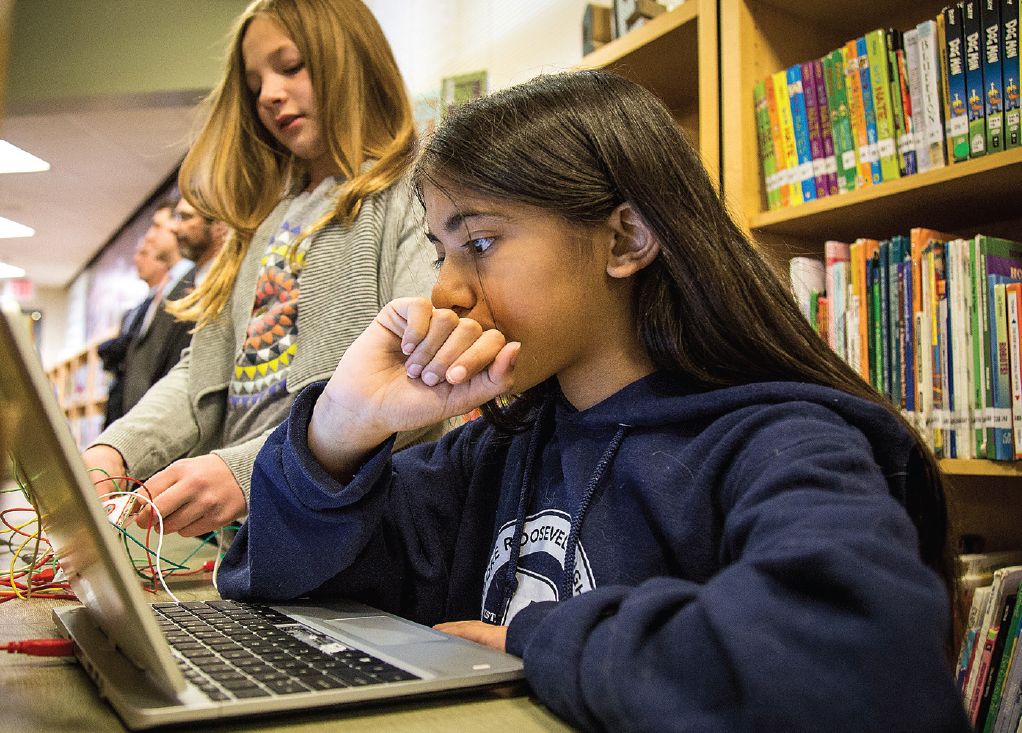 We found that overall, there was large demand and interest in CSa education among students, parents, and educators. Specifically, 82% of students were at least somewhat interested in learning CS, with Black and Hispanic students 1.5 and 1.7 times as likely as white students, respectively, to be very interested in learning CS.b Among parents, 91% wanted their children to learn CS, with 84% indicating CS is at least as important as required subjects like math, science, history, and English and 24% indicating CS is more important than these required subjects. Approximately 60% of educators agreed that CS should be required if available. In fact, lower-income parents and teachers at schools with greater proportions of students receiving free-/reduced-lunch were more likely to value CS learning.

Interestingly, we also found that regardless of race/ethnicity or gender, 80% of students who have learned CS said that they learned CS in a class at school, about twice the rate of any other means of learning, including on their own, through afterschool clubs, online, or in any other program outside of school. This data strongly suggests formal education remains the best way to ensure widespread and equitable access to CS learning.

These findings point to proactive ways that computing professionals (both industry and academic) can support and advocate for CS education.

Despite the high demand and interest among parents, nearly half of administrators (principals and superintendents) cited a lack of demand from parents as a barrier to offering CS. In fact, less than 8% of administrators believed parent demand was high and less than 30% of educators agreed that CS was a top priority at their school or district. We found that even though 91% of parents wanted their child to learn CS, less than 29% of parents reported they have expressed support for CS to their schools. This lack of direct parent engagement indicates that parents feel unprepared or unable to effectively advocate with school administrators on behalf of their children.

The stereotypes played out in who is and is not encouraged—only 26% and 27% of girls reported being told by a teacher or parent, respectively, that they would be good at CS compared to 39% and 46% of boys. Girls were also less likely to see role models in the media, with 31% of those who see CS in the media saying they never see someone "like me" engaged in CS, nearly twice the rate of boys. In a previous study,4 we found that encouragement was the biggest factor influencing whether girls intended to pursue CS or not. In fact, our Google-Gallup study found that girls not only had lower confidence in learning CS (48% of girls vs. 65% of boys were very confident they could learn CS), they were also less likely to be aware of CS learning opportunities outside of classes at school and were less likely to learn CS at all (50% of girls vs. 59% of boys). Anyone can help challenge these stereotypes by promoting broader perceptions of those who engage in CS and building more inclusive environments in computing.

While we see large support for CS education among students, parents, and educators, many barriers stand in the way. What can ACM members do? Education is a deeply rooted system, so solutions need to tackle these challenges from both the bottom up and the top down and through structural and social modes.

Our Google-Gallup research uncovered a number of persistent barriers that hamper the education system's readiness of CS for All students, and these findings point to proactive ways that computing professionals (both industry and academic) can support and advocate for CS education. To tackle structural barriers and increase access, companies and computing professionals can speak up and advocate for CS in their communities and local schools to amplify students' and parents' interest and value of CS learning. From the top down level, they can call state legislators and ask for support for CS in their state — for example, share state data (see https://goo.gl/EjiVFp), Google's policy advocacy brief (see https://goo.gl/gzVOlf) and resources on code.org/promote (see https://code.org/promote).

However, increasing access alone will not enable all students to learn CS; we need to also remove social barriers. To ameliorate social challenges and enable diverse students to take advantage of available opportunities, computing professionals can spend time with teachers and students, particularly those who would otherwise not engage in CS. They can also avoid unintentionally supporting stereo-types with comments about who and what is nerdy or geeky. Rather, it is important to emphasize computing as advancing a variety of industries, from healthcare to agriculture to the arts, as well as the diversity of backgrounds of the people who practice computing. As influential adults, we can each do the small gesture of encouraging students no matter where they come from or who they are, and supporting them through positive, inclusive environments.

This is only the beginning of the journey. Increasing access to CS learning is an early needed step, but without individual and societal support to remove social barriers, the diversity gap will persist in our education system. Computing professionals can play an essential and active role in making CS accessible for all students. They can advocate with school leaders and help empower and enable young people. Each of us has the power to help build and strengthen the computing field by encouraging and welcoming all K-12 students.

a. The survey provided a definition of CS and reminded respondents multiple times throughout: "Computer science involves using programming/coding to create more advanced artifacts, such as software, apps, games, websites and electronics, and computer science is not equivalent to general computer use."

b. Students indicated whether they were "very," "somewhat," or "not at all" interested. The full research report from which this column was developed is available at http://atg.co/cseduresearch.

To Make AI Fair, Here's What Must Be Done