In the movie Star Wars: The Empire Strikes Back, Luke Skywalker is given a mechanical hand that moves and perform functions as well as his real hand. Konrad Kording, an avid Star Wars fan, has no doubt that advances in brain-machine interfaces (BMIs) will make this bit of science fiction a reality; he just doesn't know when.

"We have applications for one channel and a few channels," says Kording, a neuroscientist and professor of Physical Medicine and Rehabilitation, Physiology, and Biomedical Engineering at Northwestern University in Evanston, IL. "The question is, what are the BMI applications with hundreds of thousands of channels, and no one knows that at the moment." The channels he's referring to are electrical wires or optical connectors that can be attached to the brain and can be controlled and measured.

"The blind will see, and the amputated will move with limb replacements as well as you and me," Kording predicts.

A BMI is also sometimes referred to as a brain-computer interface (BCI), a mind-machine interface (MMI), or direct neural interface (DNI). The bottom line is such systems facilitate a direct communication pathway between an enhanced or wired brain and an external device.

BMIs are nothing new. Kording points to one of the earliest simple brain machines, the cochlear implant, which was invented in 1961. Deep brain stimulation, a surgical procedure to implant a hair-thin electrode wire in the part of the brain responsible for abnormal movement, is being used in treating diseases like Parkinson's and epilepsy. "What they all have in common," he says, "is that [they are] low-dimensional brain machine interfaces," meaning there are not many wires or channels going into the brain.

Research has been under way for several years to study and facilitate BCI applications in the public, private, and educational sectors. 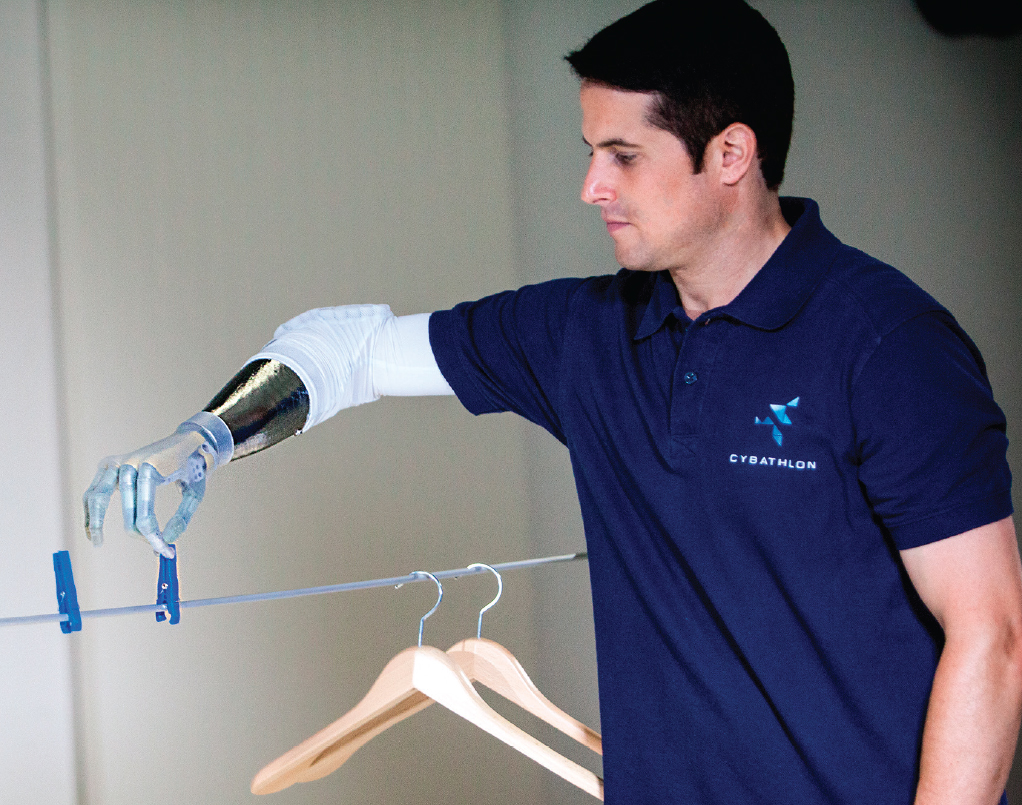 Most brain-computer interface research focuses on reading signals from the brain to the computer, usually EEG (electroencephalogram) or fNIRS (functional near-infrared spectroscopy), notes Robert Jacob, a computer science professor at Tufts University, Medford, MA. EEGs can be invasive, as when a patient's head is cut open to insert electrodes, whereas fNIRS is always non-invasive, he says. "There are other ways of reading information from the brain to the computer, like fMRI or MEG [magnetoencephalography], but these are generally too clumsy for reasonable BCI applications," Jacob says.

Most of this work used to be targeted at helping physically disabled people, but now, it is "spreading into more mainstream applications, where the brain information provides an extra channel of input from the user to the computer, in addition to the keyboard, mouse, etc.," Jacob says.

The research organization BrainGate (http://www.braingate.org) has been working to develop and test BCI devices to restore the communication, mobility, and overall independence of people with a spinal cord injury, brain-stem stroke, or Amyotrophic lateral sclerosis (ALS). The Intelligence Advanced Research Projects Activity (IAR-PA), part of the U.S. Office of the Director of National Intelligence, sponsors research programs using multidisciplinary approaches "to advance understanding of cognition and computation in the brain."

In 2013, then-President Barak Obama announced $100 million in funding for the Brain Research through Advancing Innovative Neurotechnologies (BRAIN) initiative to help neuroscientists understand the origins of cognition, perception, and other brain activities. The thought was the research could lead to new and more effective treatments for conditions like autism and mood disorders, as well as people suffering from brain injuries. As part of its mission, the BRAIN initiative will develop and deploy neurotechnologies to further understanding of the links between brain function and behavior.

This prompted federal agencies like the Defense Advanced Research Projects Agency (DARPA) to get involved, with the formation of the Neural Engineering System Design (NESD) program to enhance research capabilities in neurotechnology and provide an interface for new therapies.

So it was only a matter of time before BCI began receiving greater commercial attention from the likes of billionaire entrepreneurs like Elon Musk and Bryan Johnson. Musk, CEO of Tesla and SpaceX, is backing Neuralink, a BCI venture to create devices that can be implanted in human brains to eventually improve memory and interface with computer systems. Johnson, who founded online payments company Braintree (which was acquired by eBay in 2013 for $800 million), has invested $100 million into startup venture Kernel, whose goal is to enhance human intelligence with brain implants that can link people's thoughts with computers.

"Once one or two billionaires do something, everyone wants to be involved," observes Kording. "If I was a successful business person with the chance to build something really, really cool and be part of something that's really, really exciting, what's more interesting than the brain?"

That interest has spiked growth in the global BCI market, which was valued at $723.64 million in 2014 and is expected to grow at a compound annual growth rate (CAGR) of over 10% through 2022, according to San Francisco-based Grand View Research.

"Rising occurrence of target disorders and neurodegenerative conditions are expected to propel market growth over the forecast period," the firm notes. "R&D efforts have led to pioneering in the engineering of headset development, which provides treatment for impaired cognitive function."

Healthcare applications make up by far the largest vertical segment, and accounted for over 50% of the market in 2014, followed by communication and control, entertainment & gaming, and smart home control, according to the Grand View report.

Portland, OR-based Allied Market Research is forecasting the BCI market will reach $1.46 billion by 2020, with a CAGR of 11.5% over that period.

The key factors driving this sector's growth are increasing focus on integrating the technology into various healthcare and military applications, as well as on developing communication technology for the disabled and geriatric populations, according to market research firm Future Market Insights, Valley Cottage, NY. The firm anticipates there will also be a growing focus on utilizing BCI to control Internet of Things (IoT) devices, smart home applications, and various virtual reality applications.

Fannie Liu, a Ph.D. student in the Human-Computer Interaction Institute at Carnegie Mellon University, agrees with the research, but stresses that use of BCIs right now is fairly limited.

"Industries have been focusing on gaming and medical applications, particularly for disabled or paralyzed individuals," she says, "though research in this field has shown potential in a variety of areas, such as communication, therapy, and controlling computer tools and devices."

Liu, who is working closely with her advisor, Geoff Kaufman, an assistant professor at the Institute, adds that while several applications are possible, BCI systems still face challenges in striking a balance between the usability and accuracy of both hardware and software before they are likely to be adopted by mainstream users. "For instance, heart rate monitors, another type of biosignals system, could only become more widespread with the existence of practical and decently accurate wearables like chestbands and watches, alongside the development of a number of fitness apps," she says.

BCI systems face challenges in balancing the usability and accuracy of hardware and software before they are likely to be adopted by mainstream users.

Already, systems allowing for gesturing and voice input have created new and intuitive ways for people to interact with computers without the need for the more traditional combination of keyboards and mice, Liu notes.

"Brain-computer systems push this a step further, with the goal of more directly using the brain to convey our intentions, rather than having an extra, physical step translating those intentions to text, speech, or gestures." This, she says, could make our interactions easier, faster, and ideally more natural.

Not only can these systems support human-computer interaction, but potentially human-human interaction as well, Liu says. Her work is investigating whether "we could potentially use BCI to better understand and communicate with each other," by clarifying our underlying thoughts and feelings.

In addition to Neuralink, a slew of other startups are also hoping to capitalize on the BCI market. Among them is NeuroPace, a medical device company aimed at improving the lives of patients suffering from epilepsy, which the company says affects approximately 1% of the population worldwide. NeuroPace has developed a medical device called the RNS System, which was approved by the FDA in November 2013 and which uses responsive neurostimulation (RNS) technology to monitor and control seizures in patients with drug-resistant epilepsy, according to CEO Frank Fischer. RNS is an approach to treating medically uncontrolled partial onset seizures, and works by continuously monitoring brain activity, detecting abnormal patterns, and in response, delivering imperceptible electrical pulses to normalize the activity before an individual experiences a seizure.

The RNS System can be used on individuals 18 and older to monitor and respond to brain activity in real time, preventing epileptic seizures at their source, Fischer says. The system costs $37,000, which includes the implantable device, leads, and remote monitor.

Liu is investigating whether "we could potentially use BCI to better understand and communicate with each other" by clarifying our underlying thoughts and feelings.

Both Kording and Liu caution that it will take years before BCIs become more widespread, with Liu observing that existing systems require a lot of setup. "Users need to be equipped either invasively through surgical implantation or noninvasively with several sensors or hardware that can take a while to calibrate." As a result, right now, both options "are not practical for everyday use," she says.

Although more usable consumer-grade devices have come out in the last decade, they tend to be less accurate, she observes. "Future iterations of BCI would likely continue to be noninvasive, but with new methods that can enable the recording and processing of stronger and better signals from the brain."

Major hurdles like privacy concerns also need to be addressed. Liu says her research has found people are reluctant to allow systems to tap into their brains and understand their intentions, as they may feel their inner thoughts can be read and revealed to anyone with access to the system. "BCI systems need to protect users' privacy if they are ever to become prevalent," she says.

How to keep implants in the brain, particularly if a device involves wiring, also needs to be determined because the brain can reject them, adds Kording. "At the moment, we don't have ways of interfacing with the brain in ways where devices will last a lifetime."

Scientists and researchers also need to deal with issues involving the heat BCI devices give off, and how to analyze and control the data they produce. Unlike the devices being developed by Musk and others, these are the higher-dimensional, more complex BCI systems, he says.

In addition to heat concerns, if the devices are not encased properly, they could potentially corrode and damage the brain, Kording adds.

"So there are lots of problems, but lots of opportunities," and neurotechnology is helping keep technology so interesting, he says. "In some way, neurotechnology is the final frontier, because if we understand how the brain works, we can understand a lot of the things that ultimately affect us and make us be humans." It is also probably the hardest area to figure out, Kording says.

"Understanding any other part of science is probably easier than understanding the brain and arguably, less exciting."

Forget Zoom School. For Some Students, Class Is in Session in VR