In a mythical land of rhetorically encouraged antagonism, different factions manage to co-exist, though poorly. Imagine a set of red and blue hill towns connected by a network of roads. People in the red towns deal well with one another. People in the blue towns deal well with one another. But when a person from a red town travels through a blue town or vice versa, things can get unpleasant. The leaders of the red and the blue towns get together and decide the best way to resolve their differences is to perform a series of swaps in which the inhabitants of k red towns swap towns with the inhabitants of k blue towns with the end result that a person from a blue town can visit any other blue town without passing through a red town and likewise for a person from a red town. We call such a desirable state "partitioned peace." The goal is to make k as small as possible.

Warm-Up 1. Given the configuration in the figure here, what is the minimum number of swaps needed to achieve partitioned peace? 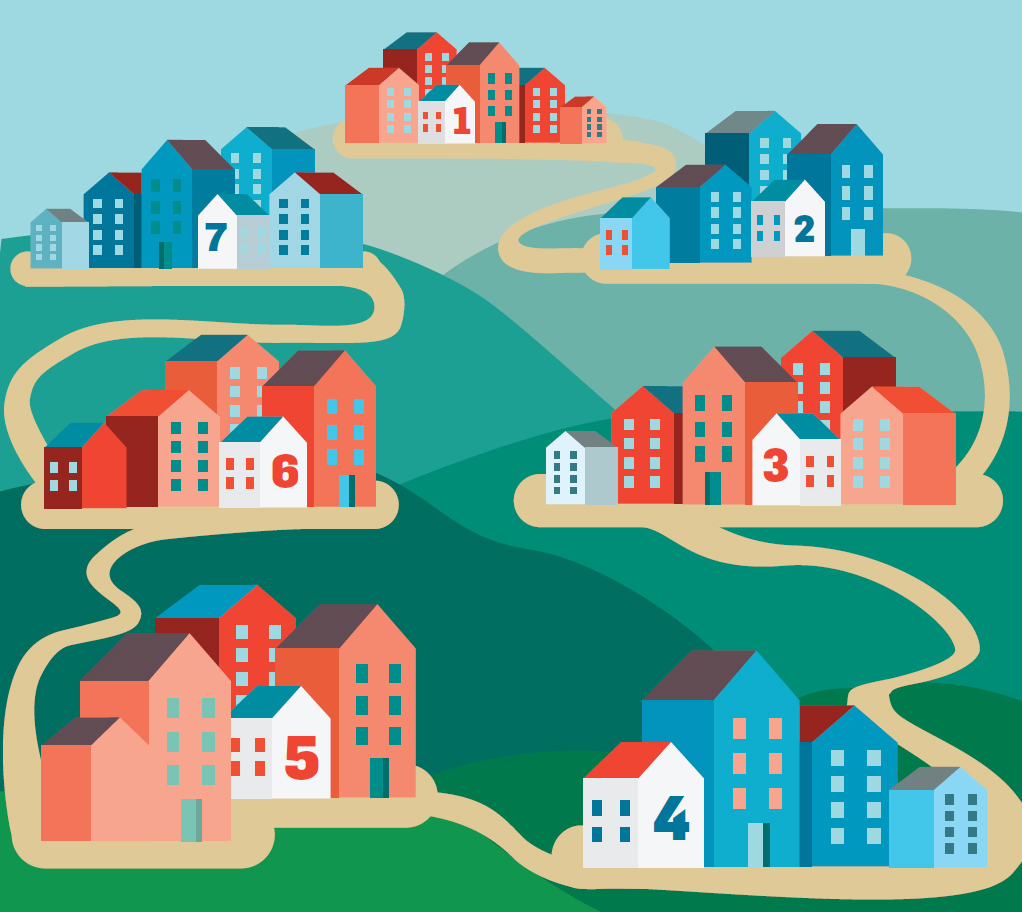 Figure. What is the minimum number of towns you can exchange so red and blue travelers never need to cross the other color's towns?

Because exchanging town populations is painful for the people who must move, the leaders seek other arrangements; they are willing to build, for example, a certain number of roads to reduce the number of swaps.

Warm-Up 2. Given the configuration in the figure, what is the minimum number of swaps needed to achieve partitioned peace if you were able to build a single new road?

Can you create an algorithm that will perform a minimum number of swaps to achieve partitioned peace?

Challenge: So far, we have considered only a very simple configuration of towns; now consider that the red and blue towns alternate like the squares of a four-by-four checkerboard. Every town is connected to all its vertical and horizontal neighbors. You may build eight new roads between diagonally neighboring towns. Where should the roads go? And after the roads are built, which towns should swap populations to minimize the number of swaps needed to achieve partitioned peace, where the swaps are between towns directly connected by roads? The goal of any solution is to minimize swaps. 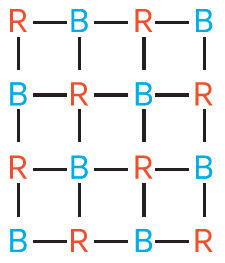 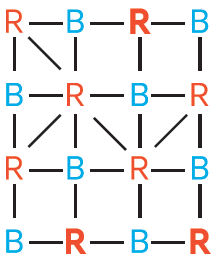 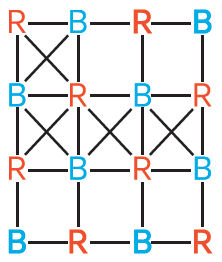 The two sides then need just three swaps: red and blue on top and the pairs on the bottom.

Upstart 1. Suppose you are given an arbitrary planar graph of connections and an arbitrary red/blue coloring of nodes. You are also given a budget of r planar edges you can add. Can you create an algorithm (and implementation) that will perform a minimum number of swaps to achieve partitioned peace? If so, please explain it in pseudo-code and send links to platform-independent software.

Upstart 2. Now consider the same question as in Upstart, 1 but allow non-planar edges.

Dennis Shasha (dennisshasha@yahoo.com) is a professor of computer science in the Computer Science Department of the Courant Institute at New York University, New York, as well as the chronicler of his good friend the omniheurist Dr. Ecco.

All are invited to submit their solutions to upstartpuzzles@cacm.acm.org; solutions and discussion will be posted at http://cs.nyu.edu/cs/faculty/shasha/papers/cacmpuzzles.html

Copyright held by the author.
Request permission to (re)publish from the owner/author

With an Internet of Animals, Scientists Aim to Track, Save Wildlife

Proposal: A Market for Truth to Address False Ads on Social Media