Computer science is Duke University's fastest-growing major, with 49 first and second majors in the class of 2011, to 252 in the class of 2018, more than a five-fold increase. It's also the major with the highest average salary immediately after graduation, according to data from the National College Scorecard.

Duke's classes of 2011 to 2018 had on average 9 percent Black graduates and 6 percent Hispanic graduates, less than than the U.S. population as a whole. 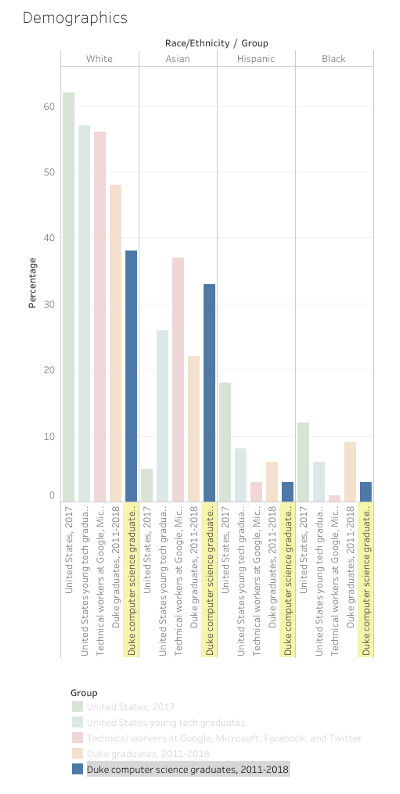 In February, Duke senior Paloma Rodney wrote in The Chronicle about informal groups perpetuating the culture of computer science as being an all-boys club. She pointed out that all 16 members of the team behind GTHC, a student-developed app, were male, a worse total than the 26% of women who make up the technical workforce in the United States. 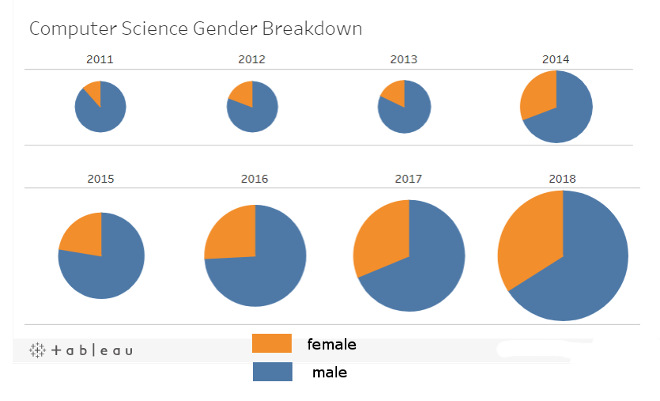 Data show racial and gender disparities. Between 2011 and 2018, Duke awarded a total of 1,067 computer science degrees. Of those, 9 went to Black women, and 10 were awarded to Hispanic women — less than 1 percent of all computer science majors for each demographic.

In the same time period, 321 white men and 257 Asian men received computer science degrees. More importantly, those numbers have been growing rapidly, while the number of Black and Hispanic women studying computer science has fluctuated between zero and four every year.

The Percentage Project, run at Duke by Women in Technology, has attempted to put numbers to some of these experiences. In a survey of undergraduate students, the project found that at Duke, women and non-binary students are less likely to feel comfortable asking questions during lecture and more likely to feel like they have to prove themselves before being taken seriously in academic settings.

What students choose to major in is just one part of a broader pipeline into tech — one that includes everything from the AP courses available to students in high school, to being exposed to coding prior to Duke, to the dropoff as students progress within the major, to the professional choices students make even after receiving their degree.

And tech isn't just a lucrative career. Tech has increasingly relevant social implications along lines of race and gender that dictate what news and search we see, how crime and policing are enforced, the accuracy of facial recognition software, and who systems are fundamentally designed for.

A discussion on achieving racial equity at Duke will have to include conversations about technology and its role in society.

Author Amy Fan graduated in 2020 with a B.S. in Mathematics from the Trinity College of Arts and Sciences at Duke University.