The 6th edition of the annual ranking for top scientists in the area of computer science and electronics offers the academic community visibility and exposure to the influential research contributions made by those at the forefront of computer science.

For the 2020 6th edition of the ranking, more than 6,000 scientist profiles were examined with several indicators and metrics reviewed in order to consider each scientist's inclusion in the ranking. The position in the ranking was based on H-index value from Google Scholar. Only scientists with an H-index >= 40 were considered. The second verification step included a manual examination of each scientist's list of publications on DBLP to ensure they are indeed authors of a significant number of computer science-related publications. The final step involved verification of awards and fellowships of each researcher.

The full ranking for the 2020 list of top computer scientists is published online.

The other leading countries continue to be the United Kingdom with 55 scientists, Germany with 38 scientists, Canada with 37 scientists, and Switzerland with 34 scientists. However, Germany has seen a steady decline in the number of leading scientists since 2018 when they had 44 scientists listed. A smaller, but still visible decline was noted for France, which had 17 scholars on the list in 2018 and only 14 in 2020. For other leading countries, the numbers have stayed consistent across the last three years with only minor, insignificant fluctuations.

Asia has seen a significant increase in the number of scientists present on the list with 55 scientists listed in 2020 in comparison to 37 in 2018. A noticeable increase was also present for Israel (from 18 to 21).

The country associated with a scientist is based on their affiliated research institution according to Google Scholar, not on their actual nationality. 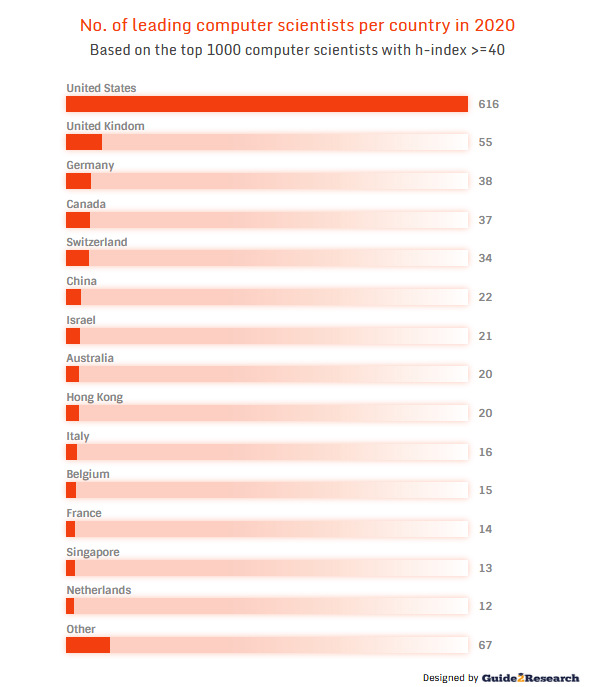 In the 2020 rankings, MIT overtook Stanford University as the leader for the first time, with 44 scientists affiliated with that university included in the ranking (4.4% of the whole list). No scientist from these two institutions made it to the top 1% though, where the only institution with more than one scholar is Carnegie Mellon University (with two scholars).

MIT saw a steady rise in the last three years with 33 scientists on the list in 2018 and 44 in 2020, while Stanford's numbers didn't change much. Other institutions with a significant rise in numbers are the University of California, Berkeley (from 24 to 35), and Princeton University (from 9 to 14).

The most significant decline was noted for Microsoft Research, which had 25 scientists in 2018 and 12 in 2020.

Among 14 leading institutions, 11 are universities based in the U.S., three are based in Europe (École Polytechnique Fédérale de Lausanne, ETH Zurich from Switzerland, and KU Leuven from Belgium), and two are private companies (Google and Microsoft). 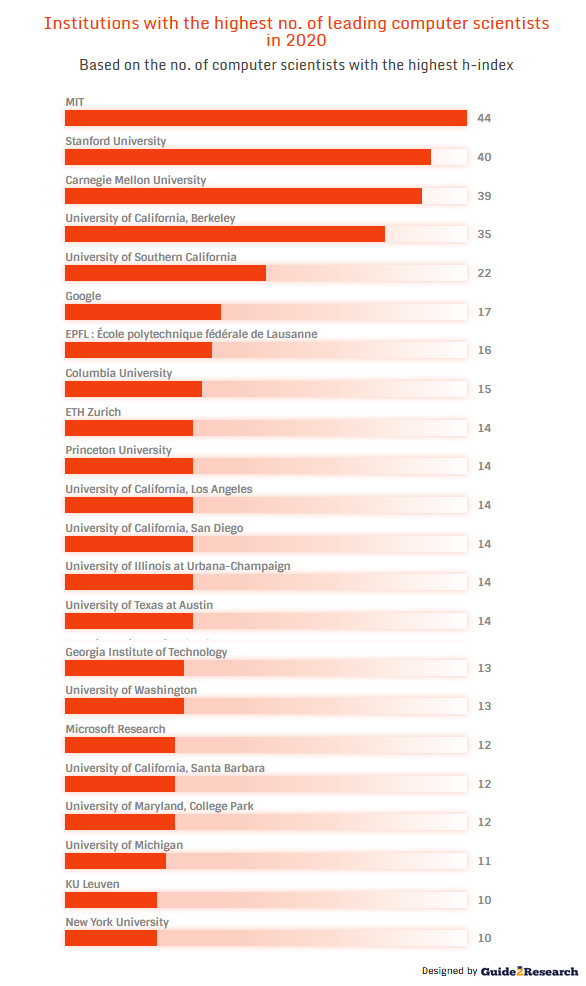 For the third consecutive time, Professor Anil Jain, from the Michigan State University, tops the list of leading scientists with a high H-index of 188. Professor Jain is known for his seminal work in biometrics.

In Europe, Professor Andrew Zisserman from the University of Oxford is ranked first in the region with a world ranking of 11.

In Asia, Professor Guanrong Chen from City University of Hong Kong tops the list with an H-index of 149 and world ranking at 16.

For Oceania, Professor Rajkumar Buyya from the University of Melbourne in Australia, is on top of the list with a world ranking of 27.

Professor Carlos A. Coello Coello, who is affiliated with the Center for Research and Advanced Studies of the National Polytechnic Institute in Mexico, is the first in South America on the list with a world ranking of 314.

The average H-index for the top 1% of scientists is 167 against an average of 85 for all 1,000 scientists included in the ranking.

The scholar with the lowest index value who made it to the ranking in 2020 has an H-index of 66, a significant increase from 56 in 2018, which shows a positive trend in the overall development of the scientific community.

The average number of articles indexed in DBLP for the 1% scientists in the ranking is 560 against an average of 327 for all 1,000 scholars.

The 6th edition of the ranking is dedicated to the memory of Professor Thomas S. Huang who passed away on 25 April, 2020. Professor Huang ranks at the 12th position worldwide, and 9th for the United States. He was a recipient of many prestigious awards, including the IEEE Jack S. Kilby Signal Processing Medal for 2001.

The methodology used to create the ranking is published online.