Since I started the post by talking about New York yesterday, I’ll talk about it today as well. The city seems to have its own magic: you can sleep for five hours a day here and feel more energetic than you were elsewhere. No wonder analysts on Wall Street could work 14+ hours per day and still survived the pressure. It can be good or bad, but I appreciate it and wish I were living in New York: I can never have enough time to work.

So, among what interested me in today’s paper presentations is the couple of presentations on new types of cursors on the screen. We have been using the mouse to operate our computers for decades now, but have not seen much change in the way we use it in practice. Recently we seem to have shifted to the "“Touch" era, yet both the mouse and the touch have a lot of space for improvements.

The first of these couple of papers is “Enhanced area cursors: reducing fine pointing demands for people with motor impairments” presented by Leah Findlater from the Information School. Leah and colleagues created a number of mouse cursors to help computer users with motor impairs to press small buttons in various applications such as Word. One of their designs require the user to first determine an area in which their desired button exists, and then, with all the buttons enlarged and aligned in a circle, cross over the button to select it. A couple of other designs that Leah came up with include magnet-like cursors, where the user first determines the area where the button is located, and then move the cursor towards the button. While doing so, the cursor tends to adhere to the button closest to it so as to enhance the selection process. 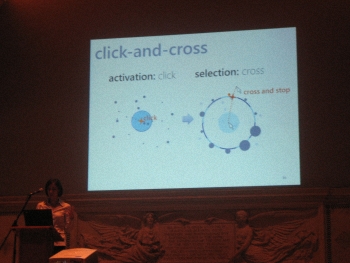 The other paper that fell in this range is "The Satellite Cursor: Achieving MAGIC Pointing without Gaze Tracking using Multiple Cursors" by Chun Yu et al. from Tsinghua University. The problem that Yu was trying to solve is to reduce cursor pointing time on large displays. Their solution, then, is to create a cursor close to every button on the screen, but the tilt angle from each cursor to their closest button is unique. When the user wants to point at a particular button, they need only look at the area containing the button and its correlated cursor. Although the user manipulates all cursors on the screen, only their desired button is selected because of the differences in cursor-button angles, thus reducing the distance traveled by each cursor.

There are of course plenty of other great papers presented today, such as "Chronicle: capture, exploration, and playback of document workflow histories" by Grossman, Matejka and Fitzmaurice from Autodesk. Their system records the full history of art pieces created in CAD software for other users to review. Thus, users are able to learn how a masterpiece is created, and thus master the skills from such procedures.

I would like to conclude today's blog with another quote of the day, which is one of the users' comments on Grossman's Chronicle system, since although the comment is exaggerated, it is indeed what HCI scientists are striving to achieve:

"The only things it doesn't do is wash the dishes and do the laundry."

About the author:
Langxuan "James" Yin is a Ph.D. candidate at the College of Computer and Information Science at Northeastern University. James' research is focused on creating conversational virtual characters tailored to cultural minorities that improve the target population's health and promote their health behaviors. He is also an active webcomic artist.