The Complicated Issues of Computing Education in Qatar

At the beginning of May, the ACM Education Board visited Qatar University. The goal was to meet with stakeholders and plan for developing computing education in the Middle East and India.  John Impagliazzo, Emeritus Professor from Hoffstra University and longtime Education Board member, is now at Qatar University and organized the meeting.  We went with Dame Wendy Hall, ACM President, and John White, ACM CEO and Executive Director.  The trip was amazing -- enlightening and confounding. 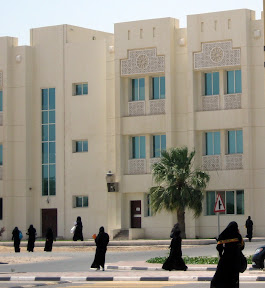 Qatar University has a significant gender imbalance in their computer science program, but opposite of the United States and much of the Western world.  They are 70% female.  The professors at QU explained that being a computer scientist isn't a well-respected job in Qatar.  The men go for the "Engineering" labelled degrees, which lead to higher-paying jobs.  The QU faculty explained that the computing jobs in Doha (capital of Qatar, home of QU and of the majority of Qatar's population) are mostly about adapting and customizing applications (explicitly not making their own applications) from elsewhere to make them fit in Qatar and the Middle Eastern culture.  The QU CS faculty are planning to add more Information Systems and Information Technology into their curriculum, to better prepare their students for the available jobs.

Then we got to meet the female CS students at QU.  These women totally embrace "geekiness."  They are pushing their faculty to let them build applications sooner in the curriculum.  QU offers no programming competitions.  These women are looking up international programming competition problems, to push themselves!  I was amazed at how eager these women are, how much they want to program "robots, animation, mobiles--anything!  We want to be challenged!"

On the next day, we visited Education City, home to satellite campuses of six American Universities.  Built by the Qatar Foundation, the goal is to change Qatari culture into a "knowledge-based society" where people build their own intellectual property and not just adapt Western ones.  Qatar has oil wealth now, but knows it won't last forever.  They're investing now for a future society with a culture focused on knowledge creation and innovation. All around Education City are these huge free-standing signs encouraging Qataris to Innovate! and Learn!

CMU Qatar has a Computer Science program that is 50/50 female and male! They emphasize developing “a Geek culture,” because they wanted to encourage that sense of wanting to learn and digging in to figure it out yourself which they saw as missing from the local culture. Classes at CMUQ are co-ed, integrating men and women.  Not all CMUQ students are from Doha, while most of the women at QU are from Doha, and have no interest in leaving Doha.

Why are the women of QU not going to CMUQ?  They told us because they want segregated classes.  They don't want to go to classes with men.  QU has a women's campus and a men's campus.  Many women at QU will never go to the men's campus.

When we met with the CMU Qatar faculty, they told us that they want to see more "computer science" curriculum in Doha, and less information systems and information technology.  That's what the Qatar Foundation wants, to see more about creating new technologies, not adopting, adapting, and managing existing ones.  Are there jobs for that in Doha?  "Maybe not now, but there will be!"

But will the new jobs be there in time for these students who won't leave Doha?  How quickly can culture (and industry) change, to embrace innovation over adaptation?  The CS women of Qatar University are eager to program, hungry to build new applications, but just as intensely value their gender-segregation and staying with their families in Doha.  It's a complicated and fascinating problem, of the challenges of changing the culture of a nation.

I don't see where is the complication is this issue? there is what we can call The Humanitarian commons and the cultural privacy. Science and technology are a humanitarian common that all cultures can Integrate within their society without much implications. However there are cultural privacies that any culture won't sacrifice. For example in the age of the renaissance in Europe; they copied and translate most of arabic books on medicine , mathematics , chemistry etc.. but Renaissance Europe didn't translate muslim books on Quran , Islamic law , islamic philosophy etc.. why? because these knowledges are a cultural privacy for Muslims. so Europeans were not interested in integrating these knowledges into their western societies. on other hand islamic math and medicine of the middle ages were Global Commons so European took them without much problems.

We should respect the privacy of other different cultures. Your current superiority in Science @ technology doesn't give you the right to change other nations' cultures. A Muslim woman should not sacrifice her religious beliefs and duties To become a real computer scientist woman.
I hope westerners could understand this important issue of cultural privacy and stop their attempt to impose forced cultural changes to other nations under the pretext of bringing them the so called enlightenment of Western culture.

I agree that a Muslim woman should not sacrifice her religious beliefs and duties to be a real computer scientist. The women we met in Qatar plan to stay true to their religious beliefs and duties AND become a computer scientist. That's what makes for interesting complications and issues. For example, the women want to innovate and build new applications, but they also want to stay home with their families in Doha. The Qatar Foundation is developing businesses that will focus on innovation and new applications. But will those jobs be ready for these women when they graduate?

I see the changes in culture and educational opportunity in Qatar as coming FROM Qatar. The Qatar Foundation created Education City and invited the ACM Education Board. I agree that the Western world should not be imposing change. However, we should provide support for changes when asked.