Continuing on my musings about ways to encourage girls to study computer science and other STEM subjects, I move on to consider the exciting emerging field of computational crafts, or e-textiles. If you’re new to this topic, have a look at Leah Buechley’s work  and prepare to be wowed. It’s the combination of craft work with electronics with programming. If that sounds boring, here are some examples to bring it to life: a tapestry that changes colour according to the weather or a bracelet which notifies you of incoming tweets.

As a female in computer science, I am quite often asked “how can we get girls interested in programming?” as if being female gives me some special insight into the mind of my clan. How would I know? I like programming already! I am the converted who doesn’t need preaching at. However, computational crafts is something I can get excited by because I find it so appealing to my soft squidgy flower-loving feminine side. The fact that it involves not just making beautiful artefacts but ones which display meaningful information delights my geeky hardcore so-called masculine side, thus uniting the conflicted aspects of my disjointed female computer scientist soul. (Have I offended enough people with this revolting caricature yet?)

I was lucky enough to have a great student this year who was also interested in the potential of computational crafts to encourage girls to take an interest in computer science, particularly programming. Emma Jane decided to develop a programmable bracelet which would enable teenage girls to communicate with each other in secret, based on the Buddy Beads project. The idea is that Alice has a bracelet which has input and output devices on it, such as accelerometers, switches, lights and buzzers. You can get very tiny, attractive versions of these (see http://www.aniomagic.com/) which you can embed in beads or sew into soft circuits with conductive thread. Alice’s bracelet is coupled with Berta’s bracelet and they communicate wirelessly using an Arduino Xbee component. So when Alice wants to attract Berta’s attention to a hot boy (or gadget or equation – let’s not prejudge these teenagers!) she presses switch 1 on her bracelet. The girls have previously specified (or even programmed) that switch 1 on Alice’s bracelet should be mapped to a yellow flashing light on bead 1 of Berta’ s bracelet so Berta is able to interpret Alice’s message and respond if she chooses. Emma Jane made prototype bracelets/armbands from felt (as shown below) and wrote an interface to enable teenagers to specify the conditions linking input on one bracelet to output on another. 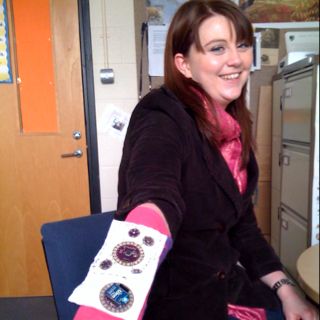 She then took the bracelets along to a local secondary school where 13 twelve year old girls tried them out in pairs. She interviewed them about their opinions of the bracelet and whether they would like to be able to make their own in class. Interestingly she had a strong positive reaction from the most able female students who were very excited by it. As a measure of their enthusiasm, they reported it was “even better than Scratch”, their previous gold standard.  The less able female students were not so interested or enthusiastic. This does require further investigation with more students but it seems promising because my current concern in recruiting students to CS degrees is to attract more females and the very brightest among school leavers. This is partly because of the bizarre UK situation where universities have a limit of the number on students we can admit and get fined for over-recruiting, even in STEM areas. We can take lots of students, but we can work to ensure we get a mixture of high quality students with different backgrounds.

It seems that there are great opportunities to develop these ideas further. There are some problems which need to be overcome, though. One is that the kit is relatively expensive, which is one reason that Emma Jane’s students were not able to make their own bracelets – we could only afford 2 prototypes for a student project. It’s certainly too expensive to give every child the components to keep after a workshop. It’s also hard to find components which are small enough to fit on jewellery and which look attractive. Another is that sewing soft circuits is extremely fiddly and the components are not always reliable. So the pleasure of the craft work is undermined by the same kind of frustration that accompanies programming when you’re tracking down a bug except that the bug here is probably a giant knot of frayed conductive thread. It’s also time consuming to make a bracelet from starters and it needs some advanced knowledge to work with the Xbees for example. So you could spend a day running a workshop but only get to the main CS content towards the end. We need ways to scaffold the CS learning, e.g. by pre-making some of the trickier craft aspects while still enabling the girls to express their creativity in the design of the bracelet and emphasising the programming aspect. All of which I am happy to experiment with. It’s too cool an idea to waste.

A Pandemic Benefit: The Expansion of Telemedicine

Why Zoom Is Terrible

The Advantages of Teaching Soft Skills to CS Undergrads Online