Mobile phones are a way of life in Japan, and this aspect of the culture manifests itself in many ways.  Among the more remarkable are the ubiquitous QR codes (quick response codes) that adorn a sizable percentage of billboards, magazines, and various other printed media.  In brief, these two-dimensional barcodes offer camera phones with the appropriate software an opportunity to connect with web-based resources relating to the product or service featured in an advertisement.  Encoding a maximum of 4,296 alphanumeric characters, or 1,817 kanji, QR codes are a forerunner of ubiquitous computing technology and portend great things to come.  It's a relatively simple (if exciting) exercise to enumerate possible applications for this technology, and much has been said on this front already. 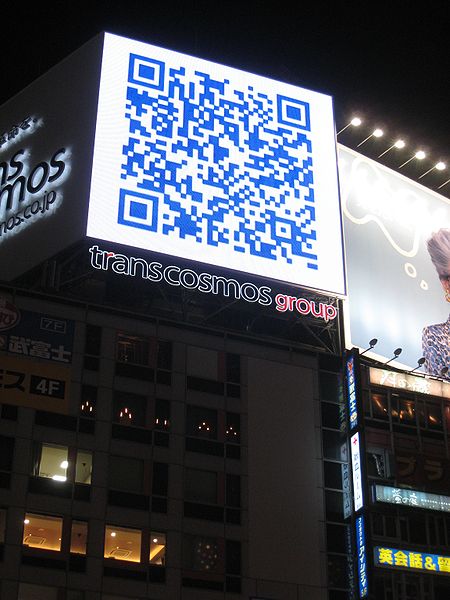 What's remarkable to me is, for all our similarities, how widely divergent American and Japanese urban cultures can be.  The market penetration numbers aren't that strikingly different, a March 2008 study showed that over 84%of Americans own a cell phone, where a Wolfram Alpha query shows that 83% of Japanese own a mobile.  The differences in practice, however, could not be more pronounced.  In terms of mobile phone use, walking the streets of Japan is like being on a college campus all of the time. It's not unreasonable to estimate that every fifth person is interacting in some way with a mobile device, and here's the rub on this point- Americans make calls on their phones, the Japanese interact.

Ubiquitous web access and widespread support for the mobile platform, in addition to the vastly increased data transfer capabilities, mean Japan is a society in which cell phones are a practical mobile computing platform.  QR codes have blossomed in this culture not only because they're immensely useful to both organizations and consumers, but because the cultural soil is ripe for their adoption.  QR has been met with lukewarm response in the US, and I fear it may be yet another mobile technology to which we get hip three to five years behind the curve.

Irrespective of this, the applications of QR codes in Japan are at times astounding.  For many high-dollar corporations such as Luis Vuitton and Coca Cola the QR code is the ad (art?) itself.   Often times, QR is the actual content, made of something unexpected, or even a medium for digital activism.  Because of it's robust digital format, creative marketers have a lot of wiggle room when it comes to creating eye-catching, market-driven applications of this technology, and like ubiquitous translation technology, it's the widespread use of internet-enabled phones that underlies this technological paradigm shift.

Images in this article are licensed under Creative Commons Share-A-Like 3.0.

Deadlines of the Digital Turn