Did Albert Einstein Calculate on the 'Millionaire' in Zurich?

As I learned in July 2018, in 1897 ETH Zurich (then the Swiss Federal Polytechnic) was the world's first university to have a copy of the legendary four-species calculating machine Millionaire. The Swiss engineer Hans W. Egli was the manufacturer of the very powerful rack and pinion calculator, which had a unique multiplying block and was later widely used (also in the U.S.). The first marketable series of 12 units was produced in 1896 at Maistraße 4 in Munich, where Egli had its own workshop. In 1898 he returned to Switzerland and opened a workshop in Zurich.

Purchase of the Millionaire

Figure 2: The purchase of the Millionaire is confirmed in another document (possibly a press release). Source: 50 years Egli Rechenmaschinen-Fabrik AG, Zurich, October 1943, page 1.

No information on the acquisition of a Millionaire can be found in the minutes of the board of ETH Zurich. This is surprising, as such machines were very expensive in those days. At that time, the Polytechnic was mainly working with (analog, logarithmic) slide rules.

As can be seen from the reference list in the manual for the Millionaire, the life insurance department of Bayerische Hypotheken und Wechselbank had two units in 1904. The Eidgenössische Materialprüfungsanstalt (Empa), founded in 1880, and the agricultural chemistry laboratory of the Swiss Federal Polytechnic each had a machine this year. The "material administration" of the Polytechnic (1897) probably meant the Empa.

The owner of the operating manual for the Millionaire preserved in the Computer Science Library of ETH Zurich was the (then) "Institut für Fernmeldetechnik an der ETH" (Sternwartestrasse 7, Zurich). Accordingly, such a machine was also used here.

In October 1943, an anniversary celebration took place on the Bürgenstock (central Switzerland) with the entire staff of the manufacturing company. This was reported in the article "50 years Egli-Rechenmaschinen-Fabrik AG" by the newspaper "Volksrecht" of October 14, 1943. The Metallarbeiter-Zeitung had also acknowledged the occasion. On November 20, 1943, the director Oscar Bannwart of H. W. Egli AG, Zurich (Wollishofen), sent two group photographs taken on the Bürgenstock to the Swiss Metal and Watch Workers' Association (source: letters from the Swiss Social Archives, Zurich).

The Millionaire was a fast, technically very sophisticated direct multiplier, but the device also mastered the other basic arithmetic operations. In contrast to conventional mechanical calculating machines, a single crank turn was sufficient for multiplication with a single-digit multiplier. Several copies of this heavyweight device have survived and are still fully operational today. Detailed step-by-step operating instructions can be found in volume 1 of the book "Milestones in Analog and Digital Computing." The ETH machines are probably no longer in existence.

The first models used setting levers for entering numbers, after 20 years they were replaced by keys. A German trading company had proposed the peculiar name "Millionaire," as can be seen from the draft of the anniversary publication (page 4). The machine contains cams and is therefore a mixture of analog and digital technology. From 1913, H. W. Egli AG in Zurich also manufactured a stepped drum calculating machine called Madas (with automatic division and, later on, also automatic multiplication). 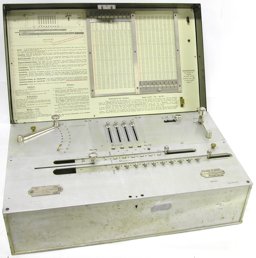 Albert Einstein studied mathematics and natural sciences at the Swiss Federal Polytechnic from 1896 to 1900 in order to become a teacher. He obtained Swiss citizenship in 1901. During 1909–1911 he was an associate professor at the University of Zurich, and during 1912–1914 a full professor of theoretical physics at the ETH Zurich. It is uncertain whether the subsequent Nobel Prize winner used the Millionaire for calculations. No references were found in the collection of the Bernisches Historisches Museum (Einstein Museum), in the Albert Einstein Archives of the Hebrew University of Jerusalem, in the minutes of the board of ETH Zurich and in Einstein's collected papers. To the best of my knowledge, however, the minutes of the ETH board do not mention the Millionaires, even if several of them were evidently in operation at ETH Zurich. For comparison: Norbert Wiener does not mention his test with Torres Quevedo's chess automaton in his memoirs, Curt Herzstark writes nothing about the twelvefold Curta, a mechanical parallel calculator, and Konrad Zuse forgets some dark sides in his self-biography.

Development of Millionaire and Madas

1922    Madas with keyboard for manual or electric drive

1927    Madas with semi-automatic multiplication, key presetting both of multiplier and multiplicand

Egli was the only Swiss manufacturer to take part (without interruption) in the Mustermesse in Basel for 52 years, from 1917 to 1968. A few years later, the company disappeared. The firm had missed the entry into electronics. The inglorious demise may explain that apart from patent documents, there are hardly any documents in the archives. Whether the jubilee publication is available somewhere and whether it came out at all, is open. Research in domestic and foreign library catalogs and archive holdings remained without success. Databases of leading science museums, which have Egli machines, apparently do not contain any corresponding entries: London (Science Museum), Mountain View, California (Computer History Museum), Paris (Musée des arts et métiers), Washington (National Museum of American History). Enquiries to archives in Zurich (Stadtarchiv, Staatsarchiv, Archiv für Zeitgeschichte, Schweizerisches Sozialarchiv), Basel (Schweizerisches Wirtschaftsarchiv), Köniz BE (PTT-Archiv) and Munich (Deutsches Museum) were without result. The draft for the anniversary publication is therefore rare.

Dating the two manuals for the Millionaire

The operating instructions contained on page 13 a reference to the year of publication (around 1905 or 1908):

"Some machines have been in permanent use for over 7 years (1897) without requiring the slightest repair so far."

"Many machines have been in permanent use for 10 years (1897) without requiring the slightest repair so far."

Herbert Bruderer is a retired lecturer in didactics of computer science at ETH Zürich. More recently, he has been an historian of technology.

AI Becoming More Conversational. But Will It Get More Honest?