Hundreds of people gathered in the theater at the Rushmore Plaza Civic Center in Rapid City, S.D., on Monday (May 22) as students, coaches, and community members attended the 2017 ACM-ICPC Opening Ceremony.

Due to tornado warnings, South Dakota Governor Dennis Daugaard was not able to make the event. Melody Schopp, the South Dakota Secretary of Education, spoke in his place.

Schopp, who was a teacher for 23 years before going to the Department of Education, reminisced on how far programming has come.

"At my first teaching job, I taught programming on a Commodore 64," she said as the audience laughed. "We did our programming on cassette tapes that we'd have to save to play back."

She ended her talk by welcoming the ICPC competitors to Rapid City and encouraging them to visit sights around the area such as Mount Rushmore, the Crazy Horse Memorial, and the Black Hills National Forest. "We welcome you and hope that you take advantage of doing some sightseeing in our great state," Schopp said. "We have the world-famous four faces — Mount Rushmore. Every time I go there I am just as proud as when I first saw it."

"I do want to tell you right off the bat — I am not responsible for the weather. That is still being controlled by the former mayor," Allender joked, after rainy and turbulent weather affected some sightseeing activities. "I am responsible for the hospitality. I trust you will find it pleasing and if so, we'd like to hear from you. Rapid City is one of the cities that people have legitimately approached me and said 'Why is everyone so friendly here?' They look you in the eye, they tell you 'Good Morning' or 'Good afternoon.' That's the way Rapid City is. This is the real United States."

Also featured at the ceremony was a traditional Lakota drum and dance performance. The dancers were adorned in colorful traditional outfits as they whirled and spun to the steady beat of the drum. 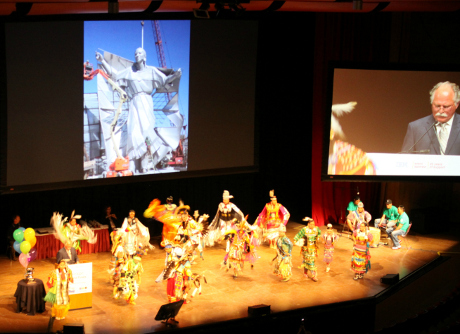 As the day came to a close, contestants exhibited a healthy mix of nervousness and excitement as Wednesday's World Finals draws closer.

There Are Too Few Women in Computer Science and Engineering