The Life of a Computer Pioneer

On March 26, the German computer scientist Friedrich L. Bauer, one of the last of the founders’ generation, inventor of the stack concept and key contributor to Algol 60 and the birth of software engineering, passed away. In this guest editorial, Walter Gander from ETH Zurich goes over the achievements of this grand old man of German computer science.
— Bertrand Meyer

Germany has lost its doyen of computer science. The informatics pioneer Friedrich L. Bauer, inventor of the stack and key contributor to Algol and to the foundation of software engineering as a scientific discipline, passed away on March 26, 2015.

The first computers were calculating machines designed to solve engineering problems faster and with fewer errors. Not surprisingly, many of the pioneers of computer science started out as numerical analysts. Such was the case with Bauer. In the famous photo from the Gatlinburg Conference on Numerical Algebra Algebra (1964), we can see Bauer together with other founders of modern numerical analysis. 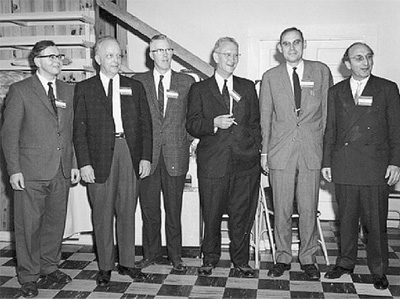 The Swiss computer pioneer Heinz Rutishauser is not in the picture since he could not travel to the conference, but Bauer had known him since 1952 [4] when  Rutishauser's habilitation thesis [7] incited Bauer, then  an assistant in theoretical physics at the Ludwig-Maximilians-University in Munich, to approach him. They were both building computers (in Zurich the ERMETH, in Munich the PERM) and developing foundational concepts of programming languages and compilers.

With Klaus Samelson, Bauer invented the stack data structure, today a mainstay of computer science; they showed how to use a stack (which they called a "cellar," Keller in German)  for parsing and evaluating mathematical formulae, and constructed "Stanislaus," a stack-based formula calculator. Bauer presented the stack principle and its application to the translation of programming languages at the 1959 IFIP Congress in Paris. In 1988, the IEEE honored him with its Computer Pioneer Award for this invention.

Bauer and Rutishauser were active members of the Programming Committee of GAMM (German society for applied mathematics), founded by Rutishauser in 1955 with the goal of proposing an algorithmic notation for the translation of formulas, and hence to define a programming language. The first session organized by Rutishauser took part in Lugano in 1957, with Bauer as one of the four authors of the resulting report [8]. Eventually ACM in the U.S. joined this effort, which led, after more meetings, to ALGOL 60 [9], the "Latin of programming languages" and the basis for many of the subsequent developments in the field.

Bauer was elected as a regular member of the Bavarian Academy of Sciences in 1968. In 2004, he was awarded the Merit Medal of the Academy.

Subsequently Bauer concentrated his research interests in programming languages and methodology, software engineering and mathematical logic. One area that always fascinated him is cryptology. After his retirement in 1989, he worked intensively on it and wrote a successful book: Decrypted Secrets: Methods and Maxims of Cryptology [2].

Also after his retirement, Bauer dedicated considerable effort and creativity to the German Museum (Deutsches Museum) in Munich, installing a unique computer exhibition on the third floor, with 700 exhibits over 1,400 square meters. Among the exhibits is Konrad Zuse’s legendary Z4 computer, the only operational computer on the European mainland in the early 1950s, then installed at ETH Zurich.

His interest in the history of computer science led Bauer to write regular posts, always informative and entertaining, for the "Historical Notes" column  in the Informatik Spektrum magazine of the German computer society, later collected into a book [3].

The 39 names on the list of his PhD students at the Mathematical Genealogy site (http://genealogy.math.ndsu.nodak.edu/id.php?id=21232) read like a who’s who of today’s German academic computer science.

Professor Bauer could look back on a long and successful life. He helped shape computer science (informatics) as the newly emerging science after the war. Bauer was one of the last renaissance men in computer science, from the first relay and tube machines to the laptop, from the early attempts at processing mathematical formulae to the most advanced programming languages of today, and from the small programs of the 1950s to the full extent of modern software engineering.

[1] The Gatlinburg photograph can be generated in Matlab with the commands: load gatlin, image(X), colormap(map),caption.

Inorganic Growth In Tech: Getting Shredded with Acquisitions