The advent of Internet communication technology has many benefits for humans and has enabled us to communicate remotely with other humans through the Internet. However, was the Internet communication really invented exclusively for people, or do you think your dog should be a part of it too? Should your cat join your weekend teleconference, or should you be able to hug your pet remotely?

The First International Congress on Animal Human Computer Interaction (AHCI 2014) was started to allow animals to also benefit from Internet communication. The Congress aims to establish a new forum for research to invent and investigate how animals could also be a part of the 21st century Age of Internet more extensively. Another fundamental motivation of the Congress is to improve animal welfare and support animals, which can suffer from the lack of contact with humans. 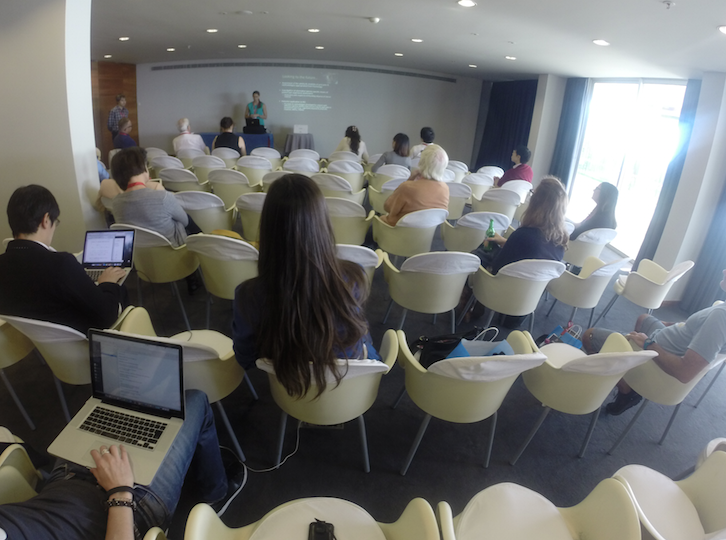 The Congress was held recently at Vida Mar Resort in Funchal, Madeira (Portugal) as a part of the Advances in Computer Entertainment (ACE) 2014 Conference. The venue is located in the beautiful island of Madeira, a part of the Portuguese Archipelago. Around 25 people who also attended the ACE 2014 conference attended the Congress.

The Congress started with opening talks by its chairs, Adrian David Cheok of City University London and Oskar Juhlin of Stockholm University, Sweden. The fledgling event featured six talks based on accepted papers, and closed with a panel discussion about the future of animal human computer interaction (AHCI). 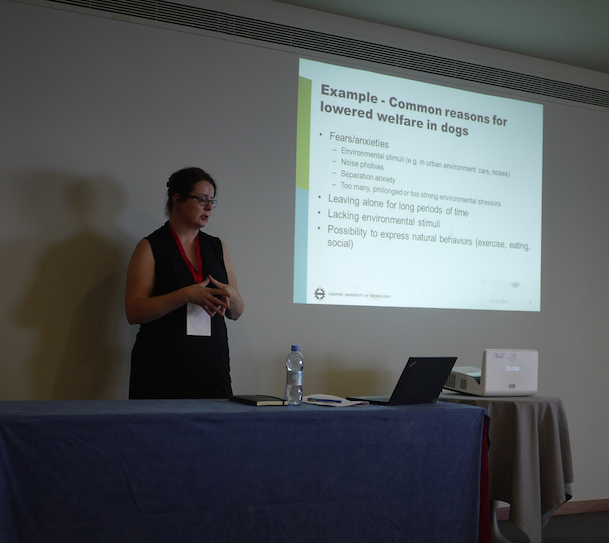 A talk by Heli Väätäjä of Tampere University of Technology in Finland was mainly about animal welfare, and a framework for tactile interaction in animal human computer interaction. Touch has a calming effect on both humans and animals. Touch also plays an important role in interaction, which Heli described as a mutual or reciprocal action or influence. She referred to early work by Adrian D. Cheok and colleagues on remote tactile communication between humans and pet chicken, questioning whether the chicken was actually aware of being observed during the interaction and pointing out that the chicken should be aware it is part of an interaction. She proposed a framework that should be considered in AHCI, which includes components like intention, awareness, input, and output. 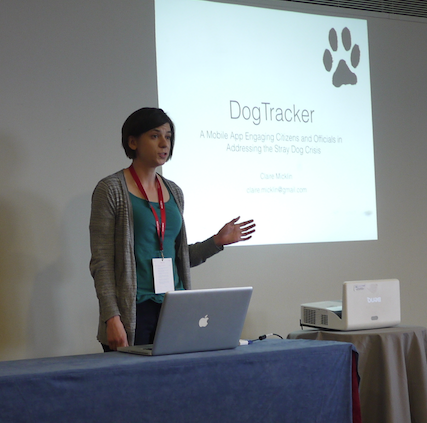 Claire Micklin of Carnegie Mellon University’s Human-Computer Interaction program focused on the issue of stray dogs; as a result of general lack of awareness, she said, there are hundreds of millions of strays dogs worldwide that sometimes will attack humans, spreading diseases like rabies. Micklin proposed tackling the problem with a mobile app that allows people to report sightings of stray dogs. DogTracker, the name of the proposed app, started out as a two-week project created for a course on interaction design. The proposed app could help animal welfare/control officials locate the strays and understand their movement patterns. Ideally, the app could lead to a greater awareness of our responsibility for the stray dog problem and ultimately lead to public support for stronger laws on this matter. 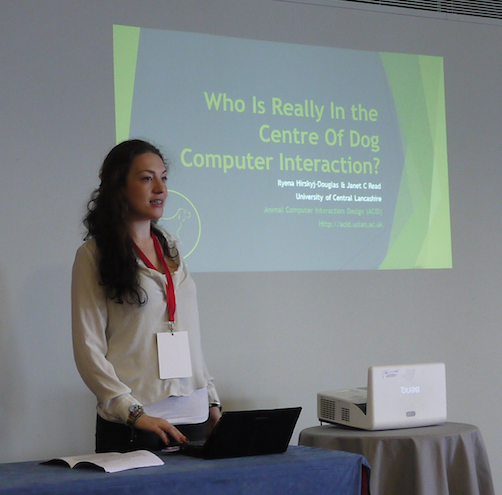 Ilyena Hirskyj-Douglas, a doctoral student and lecturer at the University of Central Lancashire spoke about the issue of who is really in the center of human-dog-computer interaction. She said the problem of current animal human computer interaction that it is still human-centred; as the animals involved in the interaction are not being informed of the interaction, whose needs are really being met? Hirskyj-Douglas emphasized that to shift to a more dog-centered system, we need to let dogs explore the technology and be naturally motivated to use the technology itself. 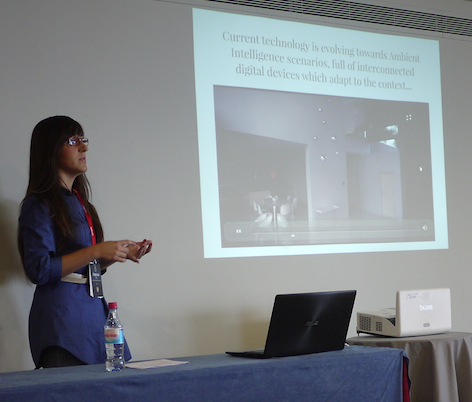 Patricia Pons, a Ph.D. student at the Department of Computer Systems and Computation of the Polytechnical University of Valencia, Spain, spoke on the topic of Animal Ludens: Building Intelligent Playful Environments for Animals. Pons said we should focus on animal’s most natural behavior: to play. A proposed playful environment is a promising scenario to provide animals the same benefits in AHCI as HCI has brought to humans. It learns from the animals’ behaviour and automatically adapts to the animals’ needs by creating playful activities for different purposes. She addressed the need to study the fundamental game phases of initiating the game, transition between stages, and termination of the game, which will be present in the environment. Factors like colors, smells, sounds, and movements also need to be considered in building the environment. 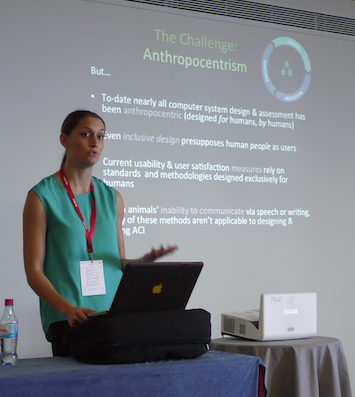 A discussion of Challenges Related to Nonhuman Animal-Computer Interaction: Usability and 'Liking' was presented by Sarah Ritvo, a graduate student in the Department of Psychology of York University. She addressed the challenge of anthropocentrism, observing current AHCI system design has been for humans, by humans, with usability and user satisfaction methodologies designed exclusively for humans, because of animals cannot provide or refuse consent to participate in such a system. Her study also provided an assessment of 'liking' in nonhuman animal computer interaction, and addressed the dilemma that since animals cannot directly communicate internal sentiments, 'liking' assessments tend to rely on preference and is presumably based on stimulus of being either the choice that is least aversive or most desired.

A talk on Grounded Zoomorphism: an evaluation methodology for ACI design was delivered by Ilyena Hirskyj-Douglas on behalf of the authors of a study on the topic that proposed a method for a playful, digitally-mediated human-animal interactions. A video game called Felino, in which cats and humans play together to catch/tap different objects on a single tablet was developed as a validation method. Cats participating in this research showed playful behavior, as well as the ability to recognize different objects as they showed different levels of interest in different objects in the game. 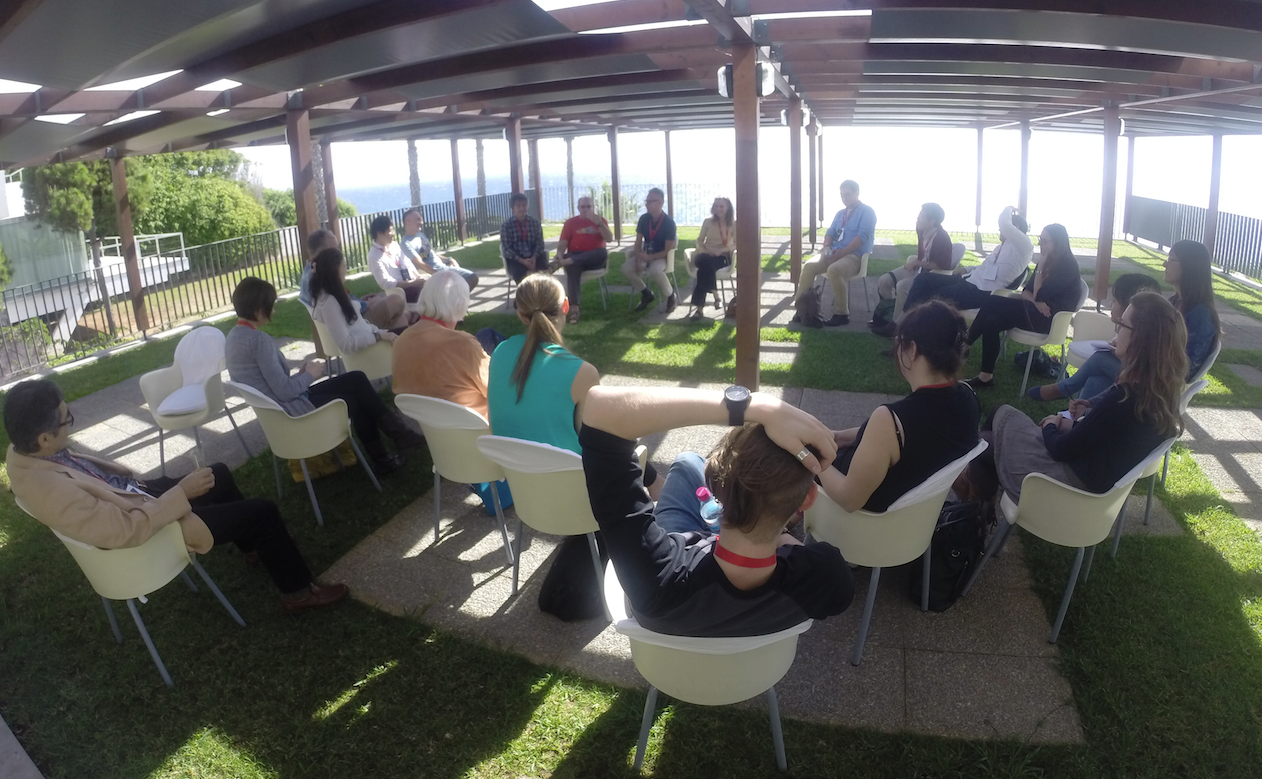 The final session of the Congress was a panel discussion session about the future of AHCI.  One of the common points that we can see from the talks is that in designing an AHCI system, it is important to consider animal welfare. We also need to shift current system design from human-centered to animal-centered, so the animals can benefit from the interaction.

There are some challenges to understand what exactly the animals need in the interaction, and we need to see beyond our perspective as humans. The key point is to explore how humans and animals engage with each other in the interaction. Everyone at the Congress was excited about upcoming developmenst in this new and emerging field of animal human computer interaction, and agreed to continue to study this field.

Let's Not Dumb Down the History of Computer Science