It's the Turing Centenary Year. Why not plant a sunflower to celebrate? Manchester University, Manchester Science Festival and the Museum of Science and Industry are asking people to grow sunflowers and count the number of spirals in their seed heads in order to test Turing's theory that the seeds grow in Fibonacci sequences. 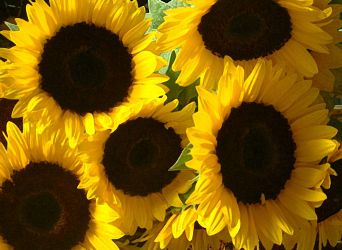 Turing was greatly interested in mathematics in nature, studying geometric patterns in flowers from an early age . At the time of his death in 1954 he was working on a problem in phyllotaxis: whether the seed patterns in sunflower heads (and other plants such as pine cones) conform to Fibonnaci sequences. If this were the case, what could it tell us about the growth of plants? Within the centre of a sunflower, there are interlocking spirals in clockwise and anti-clockwise directions. The number of spirals in each direction (referred to as the plant's parastichy numbers) are usually consecutive Fibonacci numbers. The ratio of one Fibonacci number to the next is an approximation of the aesthetically pleasing golden ratio, which might explain why people like admiring flowers.  You might wonder why sunflowers bother with the maths – why not just grow random numbers of spirals? One theory is that growing them in Fibonnaci sequences allows for more efficient packing of seeds, hence more baby sunflowers, hence greater evolutionary advantage.

As far as we know, the last empirical work on sunflowers was conducted in 1939, when J C Schoute scrutinised 319 seed heads.  Now the team in Manchester (where Turing did his work on phyllotaxis) have hit on a fantastic idea to run a citizen science project to involve members of the public in helping to finish off one of Turing's last projects.  It should result in a dataset of thousands of seed heads, which may be deeply exciting to phyllotaxologists everywhere.  Hopefully the family friendly activity of planting a flower will whet the curiosity of young people, and introduce them to the rest of Turing's work.  These beautiful flowers planted in Turing's memory will be a fitting tribute to the man to whom Computer Science owes so much.

Designing Quantum Materials on the Computer

Not Your Grandmother's Textbook Exercise