Human companions of felines will be relieved to know that the CHI community are looking out for them. As revealed in Noz and Jinsoo's 2011 CHI paper, cats can now be included in digital gaming experiences. If your cat has an iPad, and you have an iPhone, you're all set. Just download an app and a little mouse darts about the iPad screen for your cat to chase. In multi-player mode you can control where the mouse runs on the iPad using your iPhone. (See here for a video demo.) Naturally, accessibility is considered—the researchers have “designed the interface to support cat's colour acuity” in order to cater for colour blind cats (i.e., the entire species).

The CHI community have a noble history of supporting interspecies interaction. In 2006 Teh, Lee and Cheok unleashed Poultry.Internet on the world. As the authors put it: “In order to bridge the ever-increasing divide between human and pet, we propose a remote multi-modal interaction system between poultry pet and human. This system allows humans to provide affection and interact with their poultry friends anytime, anywhere through the Internet.” This paper has my favourite caption of all time: “user touching doll and chicken remotely”. I will leave you to imagine the photo for yourself, based on the information that it involves a blue harness for the chicken and a man fondling a motorised yellow squeezy blob. It plays out like this. Man is at work. Chicken is at home. Man misses chicken. Chicken misses man. Man fondles yellow blob, blue chicken jacket vibrates on chicken. Chicken feels less lonely. Chicken moves around yard at home. Yellow blob motors around man's desk. Man is much comforted. Readers who are wishing that they too had a poultry friend may be interested to learn that the researchers went on to develop a similar system called Huggy Pajamas for parents who miss their children.

Laudable as these pioneering projects are, I feel that the field needs to develop species appropriate interaction design methodologies. The cat researchers did naturalistic observations of cat owners at play with their pets using the iPad app. They interviewed the owners, but not the cats. Surely we need to hear from both users, regardless of species? I propose the Purr-o-meter by which cat satisfaction is assumed to be proportional to the volume and frequency of throat vibration in the feline. And it appears to me that the cats were not equal design partners in this game. According to Druin's methodology for working with children, users can be equal design partners, informants or testers. Here the cats (and chickens)for that matter were merely testers, doomed to merely use products but have no input into their design. At the next CHI conference I will be looking out for a paper describing the design process of an intergenerational AND interspecies design team.

In the mean time, here is a picture of one of my cats playing an iPad cat game. 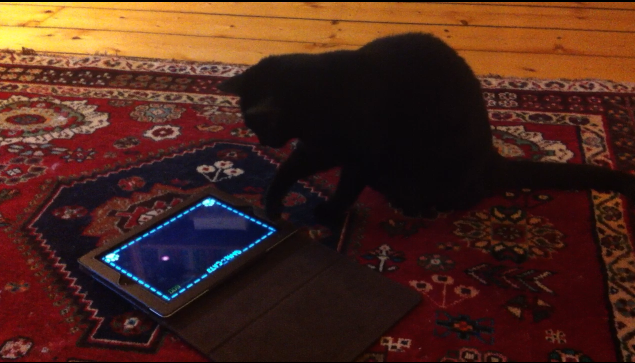 Optical Adversarial Attack Can Change the Meaning of Road Signs

Polarized Scientific Views Are Worse Than Ever