Not a thing normally in their space.  No IOT dimension indicated.

Today IBM announced they are collaborating with the U.S. Air Force Research Laboratory (AFRL) on a first-of-a-kind brain-inspired supercomputing system powered by a 64-chip array of the IBM TrueNorth Neurosynaptic System. The…

What the best way to shop using Augmented Reality?   Apple and IKEA team up.  Planning for the advanced AR capabilities in future I-Phones.

Apple Team Up With IKEA To Create AR Shopping App

Apple users will soon be able to seeRebecca…

I'm in San Francisco for the ACM conference celebrating 50 years of the Turing Award. I'll post on STOC and the Turing award celebration next week. Today though we remember another member of Bletchley Park, Joan Clarke, born
…

Job of the Week: Computational Scientist at the University of Oregon

The University of Oregon High Performance Computing Research Core Facility (HPCRCF) is seeking a Computational Scientist in our Job of the Week. The HPCRCF is a new facility located on the campus of the UO in Eugene, Oregon. …

Google to Stop Reading Your Email for Targeting

Somewhat surprised at this.  Probably the most obvious thing, after search,  that Google does that is the base of much of its considerable revenue.  It has been often criticized.  At the same time so much indicative data has

Watching How the Giants Buy AI

Below reminds me of our own attempts to buy AI during the last explosion.  And we did, buying some considerable equity positions.  Of course the scale was far less than Google's acquisitions.   Ultimately these investments lost…

Secret Algorithms and Rule of Law

Challenges posed in Technology Review.  Slightly different from what was posed in the 80s.   But unsolved.

Very broadly, if we don't know what an algorithm does,  how do we know that it obeys laws?   And in what context of data…

A paddleboarder had a run-in with an injured giant squid. Video. Here's the real story. As usual, you can also use this squid post to talk about the security stories in the news that I haven't covered. Read my blog posting guidelines…

The Secret Code of Beatrix Potter

Interesting: As codes go, Potter's wasn't inordinately complicated. As Wiltshire explains, it was a "mono-alphabetic substitution cipher code," in which each letter of the alphabet was replaced by a symbol­ -- the kind of thing…

We are not far from generating very convincing faces of people.  And if you put these on humanoid robots?   Give them Generative AI?   In the Verge:

" .... As we get better at making, faking, and manipulating human faces with…

I examined some early attempts at using online methods for buying home furnishing, usually with online camera interaction.  The idea of selling furnishing online is reemerging.  How does the Browser-Buyer change occur?   Piece…

One Stop Systems Showcases GPU and Flash Appliances at ISC This week in Frankfurt, One Stop Systems showcased all-new HPC Appliances at ISC 2017. "One Stop Systems offers a wide variety of GPU and Flash appliances to support a range of customer needs,” Said Steve Cooper, CEO of One Stop…

Elon Musk, Making Humans a Multi-Planetary Species, New Space. June 2017, 5(2): 46-61. Reportedly, Ikea is working on augmented reality software that would allow you to see the furniture in your home before buying it. Current…

Amazon has been issued a patent on security measures that prevents people from comparison shopping while in the store. It's not a particularly sophisticated patent -- it basically detects when you're using the in-store Wi-Fi…

Podcast Brent Gorda on the State of Lustre at ISC 2017

In this RichReport podcast from the German Autobahn, Brent Gorda gives us a Lustre update from ISC 2017 in Frankfurt. "On the latest Top500 list, Lustre leads the pack with 9 systems out of the Top 10."

Kim McMahon on her role as Diversity Chair at ISC 2018

Are you ready? ARM-based HPC systems will be available by the end of 2017. At ISC 2017, Penguin Computing and Bull both announced that they will deliver products tailored for the HPC industry. Both companies systems will feature…

The Association for Computing Machinery‘s (ACM) celebration of 50 years of the A.M. Turing Award is tomorrow and Saturday (June 23-24th, 2017) in San Francisco, CA. You can watch the live stream of the celebration here starting…

Just announced Oded Goldreich is one of the top researchers in cryptography, randomness, and complexity theory. Today Ken and I wish to thank the Knuth Prize Committee for selecting Oded as the winner of the 2017 Knuth Prize.…

Brought to my attention again.   Should this be the place to start for any project that claims to generate value?  Even doing a simplified model can act as a prototype from which to build from.  To test prototypes with people…

Smart Wireless Communication is the Cornerstone of Smart Infrastructures

Very nice idea from  IFTTT about giving access to public data across devices.  I am an active IFTTT user.  Plan to test with public data.

Franz Dill | June 22, 2017 at 10:33 AM From Computer Science Teacher - Thoughts and Information From Alfred Thompson

Recently I came across this cartoon and shared it on Facebook. 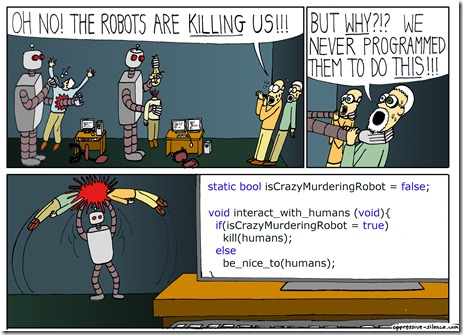 Responses were interesting. The newer one was to programming the more likely people seemed to be to explain why the if statement wasn’t working correctly. The more… Alfred Thompson | June 22, 2017 at 09:07 AM From The Eponymous Pickle

Similar in type to 'generate and test' methods.
GAN network   Generative adversarial network    Imitative.
for creating new things that are like another.

AI Combing Through Your Data

An approach we worked on.   A kind of dynamic data mining approach.  Find the best leverage, estimate value.   Look for new combinations of data and analytic value.   The computing power is here now.

AI Can Comb Through Your Data…

According to a recently declassified report obtained under FOIA, the NSA's attempts to protect itself against insider attacks aren't going very well: The N.S.A. failed to consistently lock racks of servers storing highly classified…