Neural networks are good at identifying faces, even if they're blurry: In a paper released earlier this month, researchers at UT Austin and Cornell University demonstrate that faces and objects obscured by blurring, pixelation…

Video: How ORNL is Bridging the Gap between Computing and Facilities "Starting in 2015, Oak Ridge National Laboratory partnered with the University of Tennessee to offer a minor-degree program in data center technology and management, one of the first offerings of its kind in the country. ORNL…

Ultimately you will need AI/Cognitive to drive complex analytics.  People alone cannot control the complex process, especially when you need to circle back to get new illustrative data.  Here a panel on the topic reported on.…

Video refereeing could be a major own goal for footballhere's why

Ajax's 5-0 cup victory against fellow Dutch premier division side Willem II on September 21 saw a first in football: the official world debut for a video assistant referee in a competitive game.

The playwright  Edward Albee passed away earlier this month at the age of 88. I had never actually seen any of his plays so I took the opportunity to watch the 1966 movie Who's Afraid of Virginia Woolf? based on the play.

Health as a social movement

Last week, the UK innovation charity Nesta launched a new report, Health as a Social Movement: The Power of People in Movements. It illuminates the value and role of health social movements and aims to foster debate, experiments…

Firm hopes to be 1st with skill-based slots

A New York firm hopes to be the first in the world to install skill-based slot machines on casino floors in which the main determining factor in how much a player can win is his or her ability to play the game.

Had not heard the term 'Tribal Knowledge'.  But OK, call it a means of sharing key knowledge within a company, from its own internal experts, external sources, written documents, external consulting and beyond.   And effectively…

Brian Krebs writes about the massive DDoS attack against his site. In fact, the site is down as I post this.... "Deep learning developers and researchers want to train neural networks as fast as possible. Right now we are limited by computing performance," said Dr. Diamos. "The first step in improving performance is to measure it, so we…

A market place for artificial intelligence solutions.  Open AI.   Mentioned previously, have not seen any implementations using this as yet.  What aspects of such systems are 'open'?   The algorithmic elements or how they are…

Short NYT piece that mentions a number of AI software efforts.  But this seems to be a mix of analytics and data science with Cognitive/AI.   True these two domains will often be mixed in application, but they should be separately…

In an effort to reach its target audience of influential business executives in New York City, Thomson Reuters is

" ... Improve Business Operations with the IoT .... The Internet of Things can help you improve business efficiency, control intelligence from a wide range…

To kick off the start of Smart Cities Week, the White House has announced that it is expanding its Smart Cities initiative, by adding over $80 million dollars in new federal investments and doubling the number of participating… "As more organizations turn to high performance computing to process large data sets, demand is growing for scalable and secure data centre solutions. The source, availability and reliability of the power grid infrastructure … Today DDN Japan announced that the University of Tokyo and the Joint Center for Advanced High Performance Computing (JCAHPC) has selected DDNs burst buffer solution IME14K for their new Reedbush supercomputer. " Many problems… In this podcast, the Radio Free HPC team discuss Henry Newmans recent editorial calling for a self-descriptive data format that will stand the test of time. Henry contends that we seem headed for massive data loss unless we act…

Rich Brueckner | September 26, 2016 at 10:00 AM From Computer Science Teacher - Thoughts and Information From Alfred Thompson

We celebrated my grandsons second birthday yesterday. Somehow I couldnt get into putting this post together afterwards. It felt like work. Having grandchildren changes perceptions. But now I am at work and have things to avoid… Today Quantum Corp. announced that two of Europes premier research institutions are using the companys StorNext workflow storage as the foundation for managing their growing data and enabling a range of scientific initiatives…

[Book] The Stuff of Bits

Why we use Terraform and not Chef, Puppet, Ansible, SaltStack, or CloudFormation

If you search the Internet for infrastructure-as-code (IAC), its pretty easy to come up with a list of the most popular tools: Chef, Puppet, Ansible, SaltStack, CloudFormation, and Terraform. Whats not easy is figuring out which…

Was recently re-introduced.  http://www.kmworld.com/  Had read it for years, but not recently.

A Creeping Model Of Computation

Local rules can achieve global behavior Sarah Cannon is a current PhD student in our Algorithms, Combinatorics, and Optimization program working with Dana Randall. Sarah has a newly-updated paper with Dana and Joshua Daymude

Why and How is Watson a Cognitive System?

Jim Spohrer sends along a link to a talk by Rob High, IBM Chief Technology Officer, Fellow and Vice President,  Does a good job of discussing why Watson is cognitive, unique, and why it differs from previous attempts at delivering… 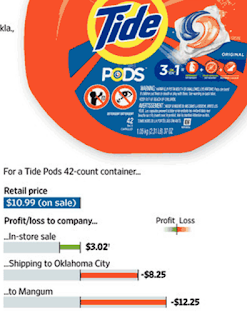 In particular an interesting example, because I buy Tide Pods via Amazon Dash.

Robots and Assistants Will Replace Tasks in Jobs

This is obvious.  Jobs are a set of tasks.  Tasks are what are replaced.  Course it can often mean that they will do the job faster and better, needing fewer people to do the jobs. Employers will be pressured by costs to do that… Over at the ANSYS Blog, Tony DeVarco writes that the company worked with SGI to break a world record for HPC scalability. "Breaking last years 129,024 core record by more than 16,000 cores, SGI was able to run the ANSYS provided…