Years goal is to improve email capabilities.  Was just introduced to the Notion AI system.   In particular because it can be linked to the Echo voice system.   Also the capabilities embedded in Cortana and Siri.  Like in all

Jim Spohrer of the Cognitive Systems Institute has started a useful curriculum, click through the below for  more information.   I recently passed along this comment:

... The most common question I get is: What is this 'cognitive'…

Some obvious solutions, but improved usability will also be important.   Many improved sensory approaches too.  These methods also align with memory applications also in line with the needs of anyone.

Wearable solutions for the… In this video from the Nvidia Booth at SC16, Jonathan Symonds from MapD presents: How GPUs are Remaking Cloud Computing. "This video discusses how price/performance characteristics of GPUs are changing the nature of cloud computing…

More hotel chains thinking about the usefulness of virtual assistants.   Notably includes Watson, and looking at the notion of conversation via a humanoid bot called Nao, and a system called Wayblazer.   Must such bots be humanoid…

Reality on Your Table Spaces 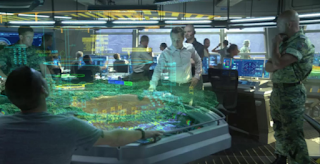 Saw a similar idea which showed architectural drawings represented in front of a client on a table.   This will likely advance to provide both demonstration level and even immersible realities.  Games are a good start to work… Franz Dill | December 24, 2016 at 12:53 PM From insideHPC

A new supercomputer has been deployed at the Jülich Supercomputing Center (JSC) in Germany. Called QPACE3, the new 447 Teraflop machine is named for "QCD Parallel Computing on the Cell. "QPACE3 is being used by the University…

Beauty Meets HPC: An Overview of the Barcelona Supercomputing Center "The multidisciplinary research team and computational facilities –including MareNostrum– make BSC an international centre of excellence in e-Science. Since its establishment in 2005, BSC has developed an active role in fostering…

I like the fact that the word  'Analytics' is used, its not just data science, its what we do with it.   Its not all about science its about understanding process and decisions.

How advanced analytics can drive productivity

A while ago, Brian Burg commented on Twitter that he would like to see more discussion of marketing in academia. I decided I'd rather write a meta-post about how we need to talk about how marketing is affecting our evaluation…

Merry Squidmas. As usual, you can also use this squid post to talk about the security stories in the news that I haven't covered....

What is the Blockchain and Why is it So Important?

What is the Blockchain and Why is it So Important?
" ... Simply put, the Blockchain is a shared single version of the truth of anything digital. It is a database… Today the HPC Advisory Council announced key dates for its 2017 international conference series in the USA and Switzerland. The conferences are designed to attract community-wide participation, industry leading sponsors and subject…

The call for nomination for the 2017 Godel Prize is up.  The call is available at http://madhu.seas.harvard.edu/Announce/Goedel2017CFN.html and will be up on the SIGACT web page shortly.  Here's much of it -- key date, February… In a step that brings silicon-based quantum computers closer to reality, researchers at Princeton University have built a device in which a single electron can pass its quantum information to a particle of light. The particle…

We know more than we can tell. We all know what a democracy is… We know that France, Canada, the USA, Japan… are democracies… Russia and China are not democracies. However, I have never seen a definition of “democracy” that fits…

Powerful Resilience through  Rituals?   Your Conscious Mind Is An Overconfident Storyteller  a thoughtful piece.   Lately have been looking at the power of storytelling and narrative, so this made me think of confidence in our… In this Chip Chat podcast, Diane Bryant, EVP/GM for the Data Center Group at Intel, discusses how the company is driving the future of artificial intelligence by delivering breakthrough performance from best-in-class silicon,…

This reminds me of swarm robotics, which have a similar approach to scale.  And an approach that cooperated towards a goal. In this video, Dr. Kelly Gaither from TACC describes how 20 students identified by XSEDE's community engagement team participated in a four-day long cohort experience themed around social change at SC16. "The objectives of the…

" ... Maple, a David Chang-backed restaurant in New York City, doesn’t have any tables, cash registers, or waiters. Instead, its customers order meals through its website or mobile app, and a fleet of

Crowdstrike has an interesting blog post about how the Russian military is tracking Ukranian field artillery units by compromising soldiers' smart phones and tracking them. News article....

ING DIRECT Australia has published yesterday and at the end of November no less than 10 articles in a paid section of The Guardian on the value of customer experience and human-centred design, entitled “Being human in a digital…

Was just introduced to Carmine Gallo and his book: Storytellers Secret.

From TED Speakers To Business Legends, Why Some Ideas Catch On And Others Don’t

Wanted to re-introduce people to the Cognitive Systems Institute, an IBM Almaden research sponsored group to which I belong and contribute.    Includes connections to many students and practitioners and research groups.   I often…

" .... Applying machine learning to AML ( Money laundering)  has been challenging due to the limited availability of…

Would you eat a 3-D printed pizza?

NIST is Continuing to Work on Post-Quantum-Computing Cryptography Standards

NIST is accepting proposals for public-key algorithms immune to quantum computing techniques. Details here. Deadline is the end of November 2017. I applaud NIST for taking the lead on this, and for taking it now when there is…