I interviewed Emmanuel Schanzer in my last series. But like so many things, Bootstrap, the program he directs has grown and expanded. A number of teachers in this series teach using Bootstrap curriculum as well. So an updated…

As always with useful commentary at the link.

Will Amazon conquer digital advertising platforms next?   By Kiri Masters in Retailwire

We took an early look at using a camera interface to 'search',  say how much inventory there was on a shelf, or if an ad could be seen in a magazine, or order a product from an ad without any code.  Gooogle Googles was considered…

Do you plan for direct value delivery, people augmentation, to replace people, or to provide outright magic ?

Planning for AI
What you need know before committing to AI.

Do you have your AI strategy? If you don't…

European Commission to invest €30 billion in Research, Science, and Innovation

Today the European Commission plans to spend €30 billion of the EU research and innovation funding program Horizon 2020 during 2018-2020, including €2.7 billion to kick-start a European Innovation Council. "The program marks …

Industry Analysis: AI and Deep Learning – the Voice of the Market In this video, Dan Olds from OrionX presents insights from their Q2-Q3 2017 Survey on Artificial Intelligence/Machine Learning/Deep Learning - one of the industry's most comprehensive AI/ML/DL surveys to date with more than 144…

Was involved with tests of this concept a number of times, it seemed the idea thing for the smart home, cosmetics aisle.  Several makers had this available, but it seems not to have stuck.   Good video at the link,  This uses…

Since Wal-Mart is the largest private employer this is of considerable interest.   How will this use of robotics ultimately influence retail and other industries? Volume of labor versus quality?    Ultimately labor is a bigDigital…

Interesting piece in the HBR that combines human and AI methods.  Like the direction:

How can companies use machine learning to efficiently…

SAS Blog on the Internet of Things

The Internet of Things is happening now    By Randy Guard

If you’ve been waiting for the buzz to settle around the Internet of Things before deciding how to invest in this new technology space, now’s the time to stop waiting.…

Gilad Shainer gave this talk at the HPC Advisory Council Spain Conference. "The latest revolution in HPC is the move to a co-design architecture, a collaborative effort among industry, academia, and manufacturers to reach Exascale…

On the Google Blog.   I recall we had talked about this game as un-solvable, but we were not thinking like a twelve year old.

Job of the Week: HPC System Administrator at Purdue

Whats Behind the AI Hype?

Podcast and text from Knowledge@wharton

What’s Behind the Hype About Artificial Intelligence?

Apoorv Saxena, lead product manager at Google and co-founder of the AI Frontiers conference that will be held in Santa Clara, Calif.,… 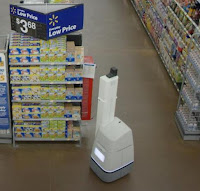 Now have seen several applications of store roving and shelf scanning robotics.   The need to get yet better data about the state of retail continues to expand.   Only way you can completely optimize your layout.  Make sure

Another company to watch with robotics and analytics background.

Will Hitachi grow its ecosystem to include AI developer tools and robotics?

By Mark Albertson  in SiliconAngle

Impressive customer testimonials and a strategy for…

Researchers in the British Virgin Islands have sunk a giant squid made out of steel mesh to serve as an artificial reef. As usual, you can also use this squid post to talk about the security stories in the news that I haven't…

Earlier this month, Deputy Attorney General Rod Rosenstein gave a speech warning that a world with encryption is a world without law -- or something like that. The EFF's Kurt Opsahl takes it apart pretty thoroughly. Last week…

The cost of moving HPC workloads to Iceland is coming down in a big way. Today Verne Global and Tele Greenland announced that the 12.4-Tbps upgrade to the Greenland Connect subsea cable system with three new 100-Gpbs connections…

SC17 Session Preview: “Taking the Nanoscale to the Exascale”

Brian Ban continues his series of SC17 Session Previews with a look at an invited talk on nanotechnology. "This talk will focus on the challenges that computational chemistry faces in taking the equations that model the very …

Today German officials signed a contract for the long-term financing of a new supercomputer for DKRZ. The new machine will be used for climate research. "We need to understand much better how climate changes influence our way…

Convincing the CFO to Invest in Loyalty
by Len Llaguno

In my previous articles, we talked about the biggest struggles for loyalty finance professionals along with the challenges being faced by accountants when booking loyalty

Andres Gómez Tato from CESGA gave this talk at the HPC Advisory Council Spain Conference. "With the explosion of Deep Learning thanks to the availability of large volume of data, computational resources are needed to train large…

Rich Brueckner | October 27, 2017 at 11:20 AM From ACM-W supporting, celebrating and advocating for Women in Computing

Did you know that we’re on Facebook too? As we get ready to highlight your stories of successes, we want to invite all of the ACM-W chapters to join us on Facebook. You can find our group here: https://www.facebook.com/groups…

AI and Quaiity of Life

Elitzer isn’t alone in his thinking. His firm is part of a group, including Microsoft, Accenture…

http://radiofreehpc.com/audio/RF-HPC_Episodes/Episode163/RFHPC163TapeDecline.mp3   In this podcast, the Radio Free HPC team asks the question: Is the Cloud Killing the Tape Market? The issue came up this week that Spectra Logic…

Self-driving cars and humans must learn a common language

For all the intricate technology required for autonomous cars — the sensors to replicate eyes and ears, the computers and algorithms to serve as the car’s brains, the high-definition 3-D maps to guide them — there’s another factor…

If you have read this blog for any time you know I am a long time follower of Smart Homes.  I also managed the technical aspects of Procter & Gamble's Home and Store innovation centers.    We looked at many home technology applications…