Car sharing on campuses improves quality of life, takes cars off the road

You don't need to be a rocket scientist to figure out why UC Berkeley has designated parking areas for Nobel Laureates: if there's one thing harder to snag than a Nobel prize, it's a parking space on a UC campus.

Fighting crime at the intersection of science and social justice

During the past decade, law enforcement agencies across the country have confronted the alarming trend of sex trafficking. The crimes often take place in hotel rooms, with perpetrators widely sharing photos of the victims online… "Aligning ourselves with an organization like Microsoft further supports our mission of enabling companies to manage their application workloads whether on-premise or in a hybrid or cloud context like Microsoft Azure,” said Gary…

"These application development awards are a major first step toward achieving mission critical application readiness on the path to exascale,” said ECP director Paul Messina. “A key element of the ECP’s mission is to deliver …

Talk by the Former Head of French SIGINT

For former head of French SIGINT gave a talk (removed from YouTube where he talked about a lot of things he probably shouldn't have. If anyone has 1) a transcript of the talk, or 2) can read the French articles better than I…

Stealthy destroyer ready to set sail to join US Navy

The largest and most expensive destroyer ever built for the U.S. Navy once headed to sea in a snowstorm during builder trials. Now, it's heading into the remnants of a tropical storm as it leaves Maine for good. 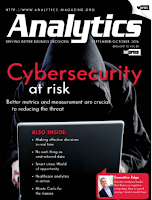 The cover story of the September/October issue of Analytics magazine focuses on the threat to Cybersecurity and using better metrics and measurement to address the growing risks. You can also read about making effective decisions…

Yet another leaked catalog of Internet attack services, this one specializing in disinformation: But Aglaya had much more to offer, according to its brochure. For eight to 12 weeks campaigns costing €2,500 per day, the company…

The pilot in last month's Emirates airliner crash landing in Dubai tried to take off again after a brief touchdown and had already begun raising the landing gear when the plane ultimately hit the ground, according to preliminary… Hailing from Norway, big-memory appliance maker Numascale has been a fixture at the ISC conference since the company’s formation in 2008. At ISC 2016, Numascale was noticeably absent from the show and the word on the street was…

Function signature: how do you order parameters?

Most programming languages force you to order your function parameters. Getting them wrong might break your code. What is the most natural way to order the parameters? A language should aim to be generally consistent to minimize… Submissions are now open for the ISC 2017 conference Research Paper Sessions, which aim to provide first-class opportunities for engineers and scientists in academia, industry and government to present research that will shape…

A researcher at Ben-Gurion University of the Negev (BGU) has developed a new methodology to track and manage rumors during emergencies, and proposes guidelines for first responders and agencies on how to handle the rumor dissemination…

Sensors as Awareness of Things

CWorld writes about what they call 'Awareness of Things' gadgets.  I mentioned one of them,  the 'Dot' recently.   A kind of cheap primitive beacon that can can provide focused information to your devices, like a smartphone.ThermoPeanut… Today Movidius announced that the company is being acquired by Intel. As a deep learning startup, Movidius's mission is to give the power of sight to machines.


The post Intel Acquires Movidius to Bolster AI appeared first on… Rich Brueckner | September 6, 2016 at 11:00 AM From The Computing Community Consortium Blog

The BD2K Guide to the Fundamentals of Data Science

The National Institutes of Health (NIH) Big Data to Knowledge (BD2K) program is pleased to announce The BD2K Guide to the fundamentals of Data Science, a series of online lectures given by experts from across the country covering…

Good piece on the topic in IBM's  Irving Wladawsky-Berger's blog:

A collection of observations, news and resources on the changing nature of innovation, technology, leadership, and other subjects ...

The Uncanny Valley of Chatbots

In 1970, roboticist Masahiro Mori coined the phrase “uncanny valley” (不気味の谷 in the original Japanese) to denote the phenomenon that when a…

With Intel Scalable System Framework Architecture Specification and Reference Designs, the company is making it easier to accelerate the time to discovery through high-performance computing. The Reference Architectures (RAs)…

The Intercept has published a 120-page catalog of spy gear from the British defense company Cobham. This is equipment available to police forces. The catalog was leaked by someone inside the Florida Department of Law Enforcement… "This release will allow aerospace stress analysts to do their tasks in a much more efficient manner. We really focused on understanding the desired workflows and creating an environment to easily move between CAD models, CAE…

Rich Brueckner | September 6, 2016 at 07:00 AM From Computer Science Teacher - Thoughts and Information From Alfred Thompson

Peter Vogel has been creating a list of tech terms for his ICT students for more than 20 years.  He edits and updates the list just before school starts for him in Vancouver BC Canada. .He discards terms no longer in the vernacular…

Quite a considerable effort.  Depends on the quality and consistency of the results.  Also the domain of language being summarized.  Similarities to language translation semantics.  Note too the large scale text datasets being…

Where are the Users? in Apps. Fascinating Stats

In Inc.  Overall stats were not surprising to me, the details are fascinating, at the link. Facebook, YouTube, Google Maps, Google Search   lead.

People Now Spend Half Their Online Time in Apps. Here's Why.
Apps are now 50% of

It’s Labor Day in the US which means this is the last day of a four day weekend for me. It’s nice to have an extra long weekend this early in the school year. Making the adjustment from summer to back to school takes some work…

Are there too many people?

Without immigration, most developed countries would face massive depopulation. In fact, half the population of the Earth lives in countries with sub-replacement fertility. The threshold for a sustained population is a fertility…

The Challenges and Rewards of Stockpile Stewardship Charles W. Nakhleh from LANL presented this talk at the 2016 DOE NNSA SSGF Annual Program Review. "This talk will explore some of the future opportunities and exciting scientific and technological challenges in the National Nuclear…

Very nicely done presentation we sponsored by Sue Feldman  of the Cognitive Computing Consortium.   In particular broadly covering what Cognitive Computing is, and when we should should or should not consider its use.    I frequently… Franz Dill | September 5, 2016 at 12:38 PM From insideHPC