Now It's Easier than Ever to Steal Someone's Keys

The website key.me will make a duplicate key from a digital photo. If a friend or coworker leaves their keys unattended for a few seconds, you know what to do....

Good piece, and especially discussion on use and effectiveness of retail loyalty programs.

How can retailers make loyalty programs more effective?     by Tom Ryan
According to the 2017 COLLOQUY Loyalty Census Report, growth in

IBM piece. Refers to some work done by Wal-Mart using Blockchain.  But then takes it further.

Why Consumer Brands Should Care About Blockchain…

Building a store for each consumer.  And how those consumers evolve over time?  Instructive piece. What is the driving force for change?  In IEEE Computer Society:

We need: Recognition, Repentance, Respect, and Reparation. To be honest, what surprises me most about the current conversation about the inhospitable nature of tech for women is that people are surprised. To say that discrimination…

Saturday, July 1st, was the start of a new term at CCC! The Computing Community Consortium (CCC) Chair Elizabeth Mynatt and Vice Chair Mark Hill are continuing in their respective roles for another year. The other members of…

Birthday workshop at Rutgers last January Combined from source Eric Allender and Michael Saks have been leading lights in computing theory for four decades. They have both turned 60 this year. I greatly enjoyed the commemorative…

It's hard to tell how much of this story is real and how much is aspirational, but it really is only a matter of time: About the size of a child's electric toy car, the driverless vehicles will patrol different areas of the city…

Twitter Chat - teaching computer science away from the computer #InfyEdChat

I'm going to host a twitter chat on Monday, July 10, 5PM PT / 8PM ET. Join me to talk about teaching computer science away from the computer. Bring your ideas and pick up more. Follow #InfyEdChat to take part. 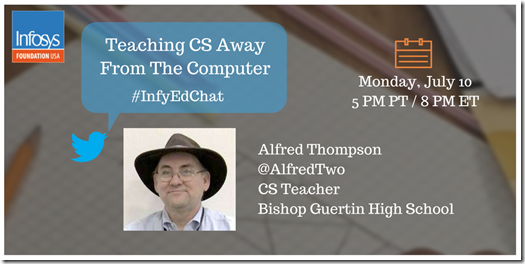 I think most of…

Intriguing work that looks specifically at data from after-stroke brain scans.   And an example of how this method can be used more broadly.   Having AI based methods fill in plausible data is a natural next step.  Not a difficult…

How We Learn: A Book that Understands the Research and Brings it to the Masses

There's a lot of research out there on the theory of learning, so you'd think we'd all know the tricks by now. Unfortunately, due to the relative inaccessibility of academic research by the general public, this isn't the case…

From Bloomberg, first specific stats I have seen:

" ... Shipments of intelligent home speakers surged nearly 600 percent to 4.2 million units in the fourth quarter, with Amazon taking about an 88 percent share and Google 10 percent…

Some of Europe’s leading supercomputing centers have joined forces to create a buyers group that will enable joint public procurement of new HPC systems. "The new partnership of four public HPC centers (BSC, CINECA, JSC, and … "There is real excitement about new technologies like Quantum Computing, however many things are needed to help users learn how to program and use Quantum computers," said Earl Joseph, CEO at Hyperion Research. "By providing …

Today Maxeler Technologies announced it is now on the G-Cloud 9 framework and can offer its world class accelerated compute performance to the entire UK Public Sector. "I am delighted we can support all parts of the UK Public…

In this video from ISC 2017, Oliver Tennert from NEC Deutschland GmbH introduces the company's advanced technologies for HPC and Machine Learning. "Today NEC Corporation announced that it has developed data processing technology…

Apparently only in Mandarin for now.  Continued competition in this space.

NVIDIA and Baidu Partner Up to Accelerate AI

Today NVIDIA and Baidu today announced a broad partnership to bring the world’s leading artificial intelligence technology to cloud computing, self-driving vehicles and AI home assistants. “We believe AI is the most powerful …

Has now rolled out, have used it daily for a week, obvious useful add for the smart home.

Something we wanted early on.  Addresses…

The Complexity of Rubik's Cube 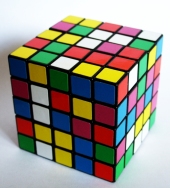 In my book I use Rubik's Cube as an example of a puzzle we can computationally solve efficiently (as opposed to Sudoku or Rush Hour). How does this square with the new result of Erik Demaine, Sarah Eisenstat and Mikhail Rudoy… Lance Fortnow | July 5, 2017 at 08:09 AM From Schneier on Security

Commentary on US Election Security

Good commentaries from Ed Felten and Matt Blaze. Both make a point that I have also been saying: hacks can undermine the legitimacy of an election, even if there is no actual voter or vote manipulation. Felten: The second lesson…

An overview of recurrent neural networks, and a tour of different types used for deep learning applications.   Note in particular, such problems that require sequencing, like forecasting.  Once again, nicely done by Jason Brownlee…

I don't have anything to say -- mostly because I'm otherwise busy -- about the malware known as GoldenEye, NotPetya, or ExPetr. But I wanted a post to park links. Please add any good revelent links in the comments....

"In the future, though, it may be possible to diagnose cancer much earlier using more sensitive body scans, new types of biomarker tests, and even nano-sensors working in the bloodstream. Experimenting with these techniques in…

In this video from ISC 2017, Raj Hazra, Corporate Vice President and General Manager of the Enterprise and Government Group at Intel, discusses key trends impacting the future growth of High Performance Computing. He focuses …

Interesting process manufacturing example.  Weight control is a very often used, and a simple control process.   Interesting to see how this differs.

The Hershey Co. is…

2017 Is Quickly Becoming The Year Of The API Economy

Yak Shaving Series #1: All I need is a little bit of disk space

I just published the first entry in The Yak Shaving Series, where we share stories of some of the unexpected, bizarre, painful, and time-consuming problems we’ve had to solve while working on DevOps and infrastructure: Yak…

Yak Shaving Series #1: All I need is a little bit of disk space

I just published the first entry in The Yak Shaving Series, where we share stories of some of the unexpected, bizarre, painful, and time-consuming problems we’ve had to solve while working on DevOps and infrastructure: Yak…