From The Noisy Channel

Different forms of a word often communicate essentially the same meaning. For example, there’s probably no difference in intent between a…

In January we learned that a hacker broke into Cellebrite's network and stole 900GB of data. Now the hacker has dumped some of Cellebrite's phone-hacking tools on the Internet. In their README, the hacker notes much of the iOS…

The Hardness of Reals Hierarchy

We looked at interaction starting with light pens.   Later on to smart mice, VR googles,  eye direction, gestures and voice.  The Verge examines the state of the question:

What’s the future of interaction?
by Ashley Carman@ashleyrcarman…

"The healthcare industry is undergoing significant changes due to the vast amounts of disparate data being generated. Blockchain technology provides a highly secure, decentralised framework for data sharing that will accelerate… In this video, researchers describe how the Tianhe-1 supercomputer supports scientific research. "Currently #43 on the TOP500, the 2.56 Petaflop Tianhe-1A carries out 1,400 computing tasks per day. It is mainly used to serve …

Newly discovered blog on one of my favorite topics, AI voicebots, and pointer to post on Alexa advertising:

" ... There are now more than 5,000 Alexa skills which means there are thousands of ways for users to interact and engage…

Nicely put piece I just reread..  A good look at why Google should win the the voice assistant interface.  By being able to efficiently figure out what we need, based on our personal and processional needs, and previous conversations…

A discussion on the famous problem William Agnew is the chairperson of the Georgia Tech Theoretical Computer Science Club. He is, of course, an undergraduate at Tech with a multitude of interests—all related to computer science…

Is there a Master Algorithm?

Interesting question.  Though I suggest there is always a focus to such a 'master'
question.   And ultimately the question directs you towards some process of direction or need.  This is why 'decision tree' approaches, that include…

Living Your Best Life with Math

Inspiring, non-technical look at Math and living Life,  perhaps a way to get kids inspired? in Quanta Magazine:

To Live Your Best Life, Do Mathematics
The ancient Greeks argued that the best life was filled with beauty, truth,

Been involved in methods of detecting and predicting maintenance issues for some time.  Nice thoughts here.

Driving your car until it breaks down on the…

Configuring human nature using stories. I agree, but also believe this needs to be controlled.  Stories also often contain strong elements of confirmation bias.  Stories need to be a way to present structure that can then be

Andy Walter of P&G on their experiences with analytics.  Interesting to read since I spent a long time there in related roles. Today the HudsonAlpha Institute for Biotechnology, a nonprofit genomics and genetics research institute, has been awarded a four-year, $6.7 million grant from the National Institutes of Health (NIH) for the next phase of the … "A new data type called a "posit" is designed for direct drop-in replacement for IEEE Standard 754 floats. Unlike unum arithmetic, posits do not require interval-type mathematics or variable size operands, and they round if an…

Despite the buzz surrounding deep neural networks (DNN) models for information retrieval, the literature is still lacking a systematic basic investigation on how generally we can model the retrieval problem using neural networks…

A whale recently died in Norway because there were thirty plastic bags in its stomach. Researchers believe it may have mistaken the plastic bags for squid. As usual, you can also use this squid post to talk about the security…

How Will Robotics Alter Staffing Models in Retail? 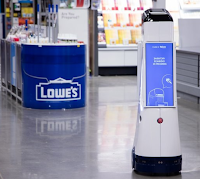 Have been following how robotics will interact with in-store retail personnel.  Lowe's is an interesting example to follow.  How will this alter staffing models, customer engagement and satisfaction?   In Retailwire, with further…

AI in the Everyday Enterprise

Always interested in how AI will be inserted into the enterprise.  We made early, simplistic attempts that were highly focused, very successful at times, but not integrated into common tasks.  How will this change in the near…

Continue to follow RFID solutions.  We tested many alternatives in our labs.

Over 10,000 Users and Counting for Comet Supercomputer at SDSC Today the San Diego Supercomputer Center (SDSC) announced that the comet supercomputer has easily surpassed its target of serving at least 10,000 researchers across a diverse range of science disciplines, from astrophysics to…

How the US Secret Service Breaks into Smart Phones

Here's an article about the US Secret Service and their Cell Phone Forensics Facility in Tulsa. I said it before and I'll say it again: the FBI needs technical expertise, not back doors.... In this video from the IEEE Rebooting Computing Workshop, Dr. William Vanderlinde, Chief Scientist at Intelligence Advanced Research Projects Activity (IARPA), explains how we have already entered the era at the end of Moore’s… Today Spectra Logic announced its tenth consecutive year of profitability at the close of calendar year 2016. Spectra Logic’s success is rooted in investing in industry-leading research and development to build and improve its…

Interesting thoughts about the complexity of conversation.

Caring Cyborgs   Asian Scientist (01/03/17)
Social robots designed to interact with people could act as caregivers for the elderly and children, but current models struggle…

Franz Dill | February 3, 2017 at 08:41 AM From Computer Science Teacher - Thoughts and Information From Alfred Thompson

The Computer Science Teachers Association (CSTA) revised K-12 Computer Science (CS) Standards is now available for review. This is not to be confused with the CS Education Framework (on which these standards build). The committee…

In McKinsey.  Ultimately we will have to deal with this.   To me this will mean better collaboration between humans, machines and evolving tacit knowledge.   The future must work.

Harnessing automation for a future that works
By…